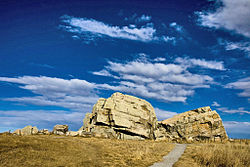 Big Rock (also known as either Okotoks Erratic or, by the Blackfoot, as Okotok) is a 16,500-tonne (18,200-ton) boulder that lies on the otherwise flat, relatively featureless, surface of the Canadian Prairies in Alberta. It is part of the 930-kilometre-long (580 mi) Foothills Erratics Train of typically angular boulders of distinctive quartzite and pebbly quartzite. 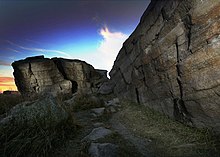 Near the end of the Pleistocene Period, between 12,000 and 17,000 years ago, a massive landslide occurred within the upper reaches of the Athabasca River valley. As a result of this landslide, millions of tonnes of beige to pinkish quartzite and quartzitic conglomerate slid from the side of a mountain and onto the top of a valley glacier within the Athabasca River valley. On its top, the narrow valley glacier carried eastward this mass of Gog Group quartzite and quartzitic conglomerate. Because it lay on and within the top of this glacier, the highly fractured boulders were neither broken up into smaller blocks nor rounded by movement of the glaciers that transported it. After leaving the Rocky Mountains, the valley glacier collided with the westward moving ice streams of the Laurentide Ice Sheet and both it, other Rocky Mountain valley glaciers, and Laurentide ice streams coalesced as ice streams and were diverted southward and parallel to the eastern flanks of the Rocky Mountains. Together they flowed as far south as northern Montana as an ice sheet before they stagnated and melted. When the ice sheet melted, erratics of Gog quartzite and quartzitic conglomerate were dropped to form the line of rocks known as the Foothills Erratics Train. Big Rock is one of these glacial erratics of Gog quartzite and quartzitic conglomerate that originated as part of a landslide in the Athabasca River valley and carried on the top of a glacier, later ice stream, to its present site. [4] [5] [6]

The people of the Blackfoot First Nation used Big Rock as a landmark for finding a crossing over the Sheep River (where Okotoks stands today) long before European settlement. The town's name, Okotoks, is derived from "o'kotok" [ˈokətok], meaning "rock" in the Blackfoot language, and may refer to the rock. [7] The rock also contains native pictographs and was considered a medicine rock to the natives. In the 1970s the government declared it a Provincial Historic Site to protect its geological and cultural importance.

James Hector, a geologist with the Palliser Expedition, first documented the rock in 1863. He misidentified the feature as a klippe. [5]

One interesting feature of Big Rock is the large split down the middle. A Blackfoot story describes how this may have happened:

One hot summer day, Napi, the supernatural trickster of the Blackfoot peoples, rested on the rock because the day was warm and he was tired. He spread his robe on the rock, telling the rock to keep the robe in return for letting Napi rest there. Suddenly, the weather changed and Napi became cold as the wind whistled and the rain fell. Napi asked the rock to return his robe, but the rock refused. Napi got mad and just took the clothing. As he strolled away, he heard a loud noise and turning, he saw the rock was rolling after him. Napi ran for his life. The deer, the bison and the pronghorn were Napi's friends, and they tried to stop the rock by running in front of it. The rock rolled over them. Napi's last chance was to call on the bats for help. Fortunately, they did better than their hoofed neighbours, and by diving at the rock and colliding with it, one of them finally hit the rock just right and it broke into two pieces.

Not only does this story explain why the rock is in two pieces, but also why bats have squashed-looking faces. The tale provides helpful caution against taking back what you have given away. [8]

Big Rock is located along the side of Highway 7, and public parking is available at the turn-off. Despite the presence of a fence around Big Rock and a sign telling people not to climb, many tourists, who visit the rock, ignore the warnings to either boulder or climb the 9 m (30 ft) tall erratic. [5] [12]