From Wikipedia, the free encyclopedia
(Redirected from Woodrat)
This article is about the rodent. For other uses, see Pack rat (disambiguation).

A pack rat or packrat, also called a woodrat, can be any of the species in the rodent genus Neotoma. Pack rats have a rat-like appearance with long tails, large ears and large black eyes. Pack rats are noticeably larger than deer mice, harvest mice and grasshopper mice, and are usually somewhat larger than cotton rats. [1]

Each species of pack rat is generally restricted to a given type of habitat within its range. Pack rats live anywhere from low, hot, dry deserts to cold, rocky slopes above timberline. Pack rats build complex houses or dens made of twigs, cactus joints, and other materials. These contain several nest chambers, food caches, and debris piles. Dens are often built in small caves or rocky crevices, but when close by human habitations, woodrats will opportunistically move into the attics and walls of houses. Some Neotoma species, such as the white-throated woodrat (N. albigula), use the bases of prickly pear or cholla cactus as the sites for their homes, using the cactus' spines for protection from predators. Others, like the desert woodrat (N. lepida) will build dens around the base of a yucca or cactus, such as jumping and teddy-bear chollas. The largest species, Neotoma cinerea, has a bushy, almost squirrel-like tail. Bushy-tailed woodrats Neotoma cinerea occupy a range of habitats from boreal woodlands to deserts. They are cliff-dwellers and are often found on isolated, high-elevation exposed boulder areas under a variety of temperature and moisture conditions. [5] They require adequate shelter among the rocks, though they are occasionally found inhabiting abandoned buildings as well.

Pack rats are nest builders. They use plant material such as twigs, sticks, and other available debris. They are particularly fond of shiny objects. A peculiar characteristic is that if they find something they want, they will drop what they are currently carrying—for example, a piece of cactus—and "trade" it for the new item. They can also be quite vocal and boisterous. Getting into everything from attics to car engines, stealing their ‘treasures’, damaging electrical wiring, and creating general noisy havoc can easily cause them to become a nuisance. [6]

Reproductive habits of rodents are variable in the wild. Offspring are born naked and helpless and must be cared for in nests called middens. Some female pack rats have been known to deliver up to five litters per year with each litter having as many as five young. The offspring may open their eyes between 10 and 12 days after being born and are usually weaned between 14 and 42 days. After around 60 days, most become sexually mature. [6] Populations may cycle approximately every 8 years due to variation in reproduction and juvenile survival. [9] Female annual survival rates vary by age from 0.42 for juveniles to 0.71 for 1–2 year olds, [9] and very few females (less than 5%) live beyond 3 years of age. [9] 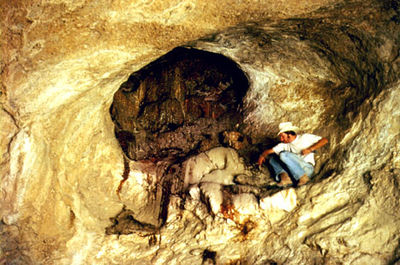 A large pack rat midden (center) from the Pleistocene period

A pack rat midden is a debris pile constructed by a woodrat. A midden may preserve the materials incorporated into it for up to 50,000 years, thus may be analyzed to reconstruct their original environment, and comparisons between middens allow a record of vegetative and climate change to be built. Examinations and comparisons of pack rat middens have largely supplanted pollen records as a method of study in the regions where they are available. [10] 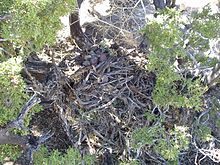 In the absence of rock crevices or caves, the dens are often built under trees or bushes. The pack rats will also use plant fragments, animal dung, and small rocks in building the den. The vast majority of the materials will be from a radius of several dozen yards of the nest. Woodrats often urinate on the debris piles; sugar and other substances in the urine crystallize as it dries out, creating a material known as amberat, [11] which under some conditions can cement the midden together, and can encase plant fragments, pellets and other debris in an amber-like matrix. The resilience of the middens is aided by three factors. The crystallized urine dramatically slows the decay of the materials in the midden; the dry climate of the American Southwest further slows the decay; and middens protected from the elements under rock overhangs or in caves survive longer.

Zoologists examine the remains of animals in middens to get a sense of the fauna in the neighborhood of the midden, while paleobotanists can reconstruct the vegetation that grew nearby. Middens are considered reliable "time capsules" of natural life, centuries and millennia after they occurred. Woodrat middens are composed of many things, including plants macrofossils and fecal pellets. 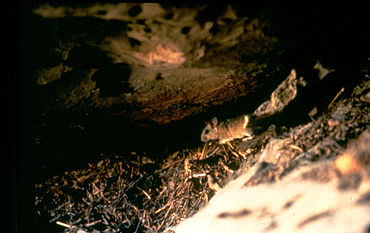 Paleo-ecologists have used a variety of techniques to analyze the plant and animal material in pack rat middens describe paleo-communities and infer paleo-climate. For example, the plant species present in middens, and the carbon isotope ratios on material in middens have been widely studied. [10] The analysis of middens was key in understanding the biota around Pueblo Bonito, thus helping to explain its history.

One form of midden analysis examined the size of fecal pellets in pack rat middens. [12] The size of woodrat pellet is proportional to the size of the woodrat. By measuring the pellets, the approximate size of the woodrat was determined based on data from a study of field-trapped woodrats. From Bergmann’s rule, differences in climate then can be determined. According to Bergmann’s rule, the body size of vertebrates is closely related to the average ambient air temperature in the region in which the vertebrate lives, so organisms in warmer regions are typically smaller than members of the same species in colder regions.