From Wikipedia, the free encyclopedia
Not to be confused with University of Charleston in Charleston, West Virginia.

The College of Charleston was founded in 1770 making it the 13th oldest institution of higher education and oldest municipal college in the United States. [7] [8] The school was formerly known as Charleston College. [9]

Albert Simons Center for the Arts

The College of Charleston consists of six academic schools, as well as the Honors College and the Graduate School of the University of Charleston, S.C. 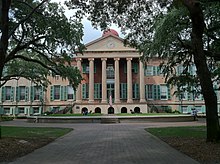 Randolph Hall is the college's main academic building and is on the National Register of Historic Places.

Outside of downtown Charleston, the college campus includes the Grice Marine Lab on James Island, the J. Stewart Walker Sailing Center and the Patriots Point Athletic Complex in Mount Pleasant, the North Campus in North Charleston and the 881-acre (357 ha) Stono Preserve (formerly Dixie Plantation) [10] on the Stono River.

The College of Charleston downtown campus is listed on the National Register of Historic Places. Additionally, the Avery Institute, which is now the home to the Avery Research Center for African American History and Culture, and the William Blacklock House are also listed individually on the register.

The College of Charleston has been noted for its beautiful campus. In 2014, it was ranked as one of the top 10 best landscaped colleges on the east coast. [11] In 2017, Travel + Leisure magazine named the College "America's Most Beautiful College Campus." [12]

College of Charleston and the media

Due to the historic look and beauty of the campus, many movies and television shows have been filmed at the College of Charleston, including General Hospital, North and South, The View, Cold Mountain, The Patriot, White Squall, Wife Swap, O, The Notebook, Dear John, and Mandie. The most popular scene location is Randolph Hall. In 2008, productions shooting on campus included the television show Army Wives and the feature film The New Daughter, starring Kevin Costner.

In 2004, the first televised debate between U.S. Senate candidates Jim DeMint and Inez Tenenbaum was filmed in Alumni Hall. ABC's The View and CNN's Crossfire also took up residence on the College of Charleston Cistern Yard before the South Carolina presidential primary in 2000. John Kerry officially endorsed presidential candidate Barack Obama in the Cistern Yard in 2008.

The Bully Pulpit Series is hosted jointly by the College of Charleston's Departments of Political Science and Communication. The series welcomes presidential candidates from the two major political parties to the campus. Candidates speak with students and Charleston community members on such topics as the frequency of press conferences, the candidate's relationship with journalists and the power of the president to persuade. Major candidates that appeared during the 2008 Presidential primaries included Senator John McCain, Congressman Ron Paul, President Barack Obama and Senator John Edwards. During that season, the series was sponsored by the Allstate Insurance Company and attendance on the Bully Pulpit events drew over 6,000 attendees. [13] During the 2016 Presidential primaries, the major candidates who participated in the series included Senator Lindsey Graham and former Maryland governor Martin O'Malley. The series hosted a slew of candidates during the 2020 Democratic Party presidential primaries. The candidates who appeared were: Mayor Pete Buttigieg, Representative Beto O'Rourke, Secretary Julian Castro, Senator Amy Klobuchar, Senator Bernie Sanders, former Vice President and eventual nominee Joe Biden, and Representative Tulsi Gabbard. [14]

The college's 19 varsity sports teams participate in the NCAA Division I Colonial Athletic Association and are known as the Cougars. The Cougars compete at a variety of athletics facilities in the Charleston area, including the TD Arena (formerly the Carolina First Arena), [15] the J. Stewart Walker Sailing Complex, Johnson Center Squash Courts, Patriots Point Athletic Complex and the Links at Stono Ferry. College of Charleston athletics are supported by the Cougar Club, which was established in 1974. During the 1970-71 school year, College of Charleston students voted to change the school nickname from the Maroons to the Cougars, in honor of a cougar that had recently arrived at the Charles Towne Landing zoo. Clyde the Cougar is the college's current mascot. [16]

Student media has actively consolidated to a single network under the name CisternYard Media. Under this umbrella is a student-run newspaper called CisternYard News which is online with a quarterly print insert called The Yard. There is also a student-run radio station called Cistern Yard Radio. CisternYard Video and a literary organization called Miscellany are also included under the CisternYard Media umbrella. The English Department at the College of Charleston publishes Crazyhorse, a national literary magazine.

Greek life has been active on campus for 120 years. Like most colleges, there are numerous fraternities and sororities on campus. The College of Charleston is home to the Alpha chapter of Pi Kappa Phi, founded in 1904 at the college. In 2017, four fraternities were shut down by the college during college president Glenn McConnell's crack down on school code violations. One of those fraternities, the Kappa Alpha Order, was the center of a drug ring. [21]