The university dates back to 1957, when the University of South Carolina set up a freshman college in a basement room of the Florence County Library. A few years later, in 1961, USC-Florence was set up on land donated by the Wallace family six miles east of Florence, South Carolina. Buoyed by these successes, a group of Florence-area citizens continued to push for the establishment of a four-year university in Florence to allow better access to higher education for the people of that area. The existing USC-F was an obvious foundation for a new institution. After several years of lobbying, Governor Robert E. McNair signed into law an act creating Francis Marion College, effective July 1, 1970. The newly created Francis Marion College initially enrolled 907 students from 23 of South Carolina's 46 counties.

In 1992, Francis Marion College achieved university status and subsequently changed its name to Francis Marion University. Today, Francis Marion has a student body of approximately 4,000. FMU draws students from across the country and around the world, but remains true to its original mission: to educate the people of the Pee Dee Region and the State of South Carolina. The student body's average in-state enrollment is 95 percent. Just more than half of FMU's students come from the Pee Dee Region.

Francis Marion is one of South Carolina's 13 state-assisted universities. Its academic departments are segmented into three schools (School of Business, School of Education, School of Health Sciences) and the College of Liberal Arts.

Since 1999, Francis Marion University has consistently ranked as one of the South's best regional universities, earning it a spot in US News and World Reports America's Best Colleges. FMU was recognized as a Great College to Work For—Honor Roll school by the Chronicle for Higher Education in 2013, 2014, 2015, 2016, 2017 and 2018.

The Slave Houses, Gregg Plantation, located on the FMU campus, were listed on the National Register of Historic Places in 1974. [1]

Located on a 400-acre (162 ha) tract of land originally included in a grant by the King of England and later made a cotton plantation by the Wallace Family, Francis Marion University is situated 6 miles (9.7 km) east of Florence. The campus includes 100 acres (40 ha) of mixed pine-hardwood and bottomland forests accessed by a series of trails. The University is located on U.S. Highways 76 and 301 and is just an hour's drive from Myrtle Beach and the Grand Strand and 4 hours from the Blue Ridge Mountains. With a metropolitan-area population of 200,000, the city of Florence is nestled alongside Interstate 95, the main north-south corridor from the New England area to Miami, and at the eastern end of Interstate 20. The city is served by Amtrak, bus service, and a regional airport. 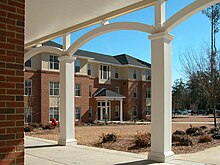 The University has an excellent writing center available for student and FMU community use throughout the school year; the center provides online and face-to-face assistance for students working on writing assignments for any class. In addition, the FMU English Department offers majors in liberal arts, education, and professional writing tracks as well as hosts a Fiction and Poetry Festival each fall.

Francis Marion also has the Richardson Center for the Child, a child-care facility for faculty, staff, and students.

The Griffin Athletic Complex, located near the main FMU campus, opened in 2012. The complex includes new baseball, softball, and soccer stadiums, a fieldhouse, and a five-acre lake.

As of 2011 [update]-12, FMU has a total of 262 professors. 198 of those professors are full-time. All faculty members have advanced degrees, and 79 percent of the full-time faculty hold doctoral or terminal degrees. The average class size is 21 students. All students are assigned a faculty adviser (in their curriculum) to assist them with class scheduling and academic planning.[ citation needed]