From Wikipedia, the free encyclopedia
(Redirected from Canoga Park)
Neighborhood of Los Angeles

Canoga Park is a neighborhood in the San Fernando Valley region of the City of Los Angeles, California. Before the Mexican–American War, the district was part of a rancho, and after the American victory it was converted into wheat farms and then subdivided, with part of it named Owensmouth as a town founded in 1912. It joined Los Angeles in 1917 and was renamed Canoga Park on March 1, 1931, thanks to the efforts of local civic leader Mary Logan Orcutt.

The area of present-day Canoga Park was the homeland of Native Americans in the Tongva-Fernandeño and Chumash-Venturaño tribes, that lived in the Simi Hills and along to the tributaries of the Los Angeles River. They traded with the north Valley Tataviam-Fernandeño people. Native American civilizations inhabited the Valley for an estimated 8,000 years. [2] [3] Their culture left the Burro Flats Painted Cave nearby. [4]

From 1797 to 1846, the area was part of Mission San Fernando Rey de España (Mission San Fernando). After the Mexican War of Independence from Spain the 'future Canoga Park' land became part of Rancho Ex-Mission San Fernando. In 1845, a land grant for the separate and historically rich Rancho El Escorpión was issued by Governor Pío Pico to three Chumash people, Odón Eusebia, his brother-in-law Urbano, and Urbano's son Mañuel. [5] [6] [7] It was located in the area west of Fallbrook Avenue and later called Platt Ranch. [8] [9] 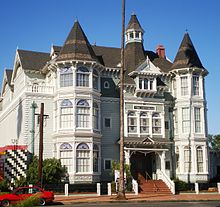 In 1863, the syndicate San Fernando Homestead Association led by Isaac Lankershim and Isaac Van Nuys purchased the southern half of the historic San Fernando Valley. They established seven wheat ranch operations and were the first to ship wheat to Europe from California. In 1869, Alfred Workman acquired the westernmost ranch, a 13,000 acres (50 km2) wheat farm in future Canoga Park (for more: See Landmarks section below). [10] Eucalyptus trees were introduced into the San Fernando Valley by Albert Workman, who imported seedlings from his native Australia and planted them on the Workman Ranch. In time, they spread through the Canoga Park area ranches, farms and beyond. It has been said that these trees are the parents of all eucalyptus trees in Southern California. [11] [12]

In 1909 the Suburban Homes Company, a syndicate led by H. J. Whitley, general manager of the Board of Control, along with Harry Chandler, H. G. Otis, M. H. Sherman and O. F. Brandt purchased 48,000 acres of the Farming and Milling Company for $2,500,000. [13] Henry E. Huntington extended his Pacific Electric Railway (Red Cars) through the Valley to Owensmouth (now Canoga Park). The Suburban Home Company laid out plans for roads and the towns of Van Nuys, Reseda (Marian) and Canoga Park (Owensmouth). The rural areas were annexed into the city of Los Angeles in 1915. [14] [15]

The entire south San Fernando Valley, from Roscoe Boulevard south to the hills, with certain exceptions, were to be subdivided in anticipation of the Los Angeles aqueduct's completion in 1913. The purchasers of the land included Harry Chandler and Harrison Gray Otis of the Los Angeles Times, Moses Sherman (a Los Angeles Pacific Railroad streetcar line builder), and Hobart Johnstone Whitley, an all purpose real estate developer who, from a start in the Land Rush of 1889 in Oklahoma to platting out 140 towns, including Hollywood.

The area was originally named Owensmouth by Los Angeles Suburban Home Company by general manager Hobart Johnstone Whitley as a sales tactic in that the town would be the new mouth of the Owens River, after the Los Angeles Aqueduct would be completed the next year. The town was founded on March 30, 1912, and the Suburban Home Company contracted with the Janss Investment Company, to sell properties. A pre-development scheme brought Pacific Electric streetcars and an all purpose highway (Sherman Way) out all the way from Hollywood through Cahuenga Pass, through the previously subdivided Van Nuys (1911). Highlighting the "opening day barbecue" was the display of the "Owensmouth Baby", a racecar that could go up and down the paved Sherman Way at the incredible speed of 35 mph.

Owensmouth, as the junior San Fernando Valley city to Van Nuys, promoted itself with the "baby" motif—using storks in their advertisement. The "baby city" of the Valley remained a very small community.

The lack of an independent water supply made annexation to the City of Los Angeles inevitable, and on February 26, 1917, it joined with its larger neighbor. The name was changed to Canoga Park in 1931, thanks to the efforts of local civic leader Mary Logan Orcutt. [16] Eventually, the area's zoning was rural/agricultural and its industry was small farms involved in the production of fruits, vegetables, and melons, some livestock, horses, a movie/television studio, and a stunt location. [17]

The Canoga Park Airstrip occupied the area now known as "Warner Center" (as shown on the street map 1955 Thomas Guide).

In 1955, Rocketdyne, then a division of North American Aviation, moved into the area. It became a major employer along with the Atomics International and Santa Susana Field Laboratory (SSFL) divisions. [18] Other aerospace companies followed: including Atomics International, Thompson Ramo Wooldridge-TRW, Hughes Aircraft, Rockwell International, Boeing, and Teledyne. Small machine shops and other ancillary businesses also sprang up to service the aerospace industry. The facility was then operated by Aerojet Rocketdyne, and was eventually closed and demolished in 2016. [19] The Santa Susana Field Lab property has been closed and will be undergoing an extensive environmental cleanup, and become an open-space park. [20] [21]

Canoga Park is bordered by Woodland Hills on the south, West Hills on the west, Chatsworth on the north, and Winnetka on the east.

Bell and Dayton Creeks flowing from the Simi Hills, and Arroyo Calabasas (Calabasas Creek) from the Santa Monica Mountains are several of the headwaters of the Los Angeles River that originate in the western San Fernando Valley that flow through Canoga Park. The Los Angeles River itself begins at the confluence of Calabasas Creek and Bell Creek behind Canoga Park High School. These and other small creeks supply stormwater and suburban runoff water to the Los Angeles River, and several are considered year round creeks. Although the creeks are now channeled and run within concrete walls, they do form a significant urban wildlife landscape and contribute to the population of indigenous wildlife left within the San Fernando Valley.

The median yearly household income in 2008 dollars was $51,601, considered average for the city. Renters occupied 63.6% of the housing stock, and house- or apartment-owners held 36.4%. The average household size of three people was average for Los Angeles. The 18.1% of families headed by single parents was also average for city neighborhoods. [24] 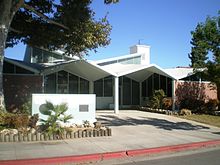 Eighteen percent of Canoga Park residents age 25 and older had earned a four-year degree by 2000, an average figure for the city and the county. [24]

Schools within the Canoga Park borders are: [38]