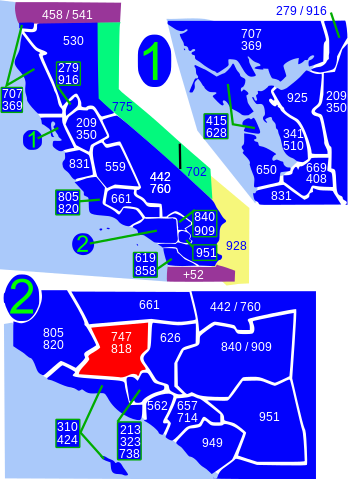 After the standardization of American telephone area codes in 1947, almost all of Los Angeles County used the 213 area code. Because the population and phone usage of the Los Angeles metropolitan area greatly increased during the 1980s and 1990s, the 213 area code was split into several new area codes, including the 818 and 310 area codes. The 818 area code entered service on January 7, 1984, making Los Angeles one of the first major cities to be split between multiple area codes. Area code 626 was carved out of the eastern portion on June 14, 1997.

In November 1999, it was proposed that "at some future date", a new 747 area code would split from 818, the new 747 serving the southern and western portions of the San Fernando Valley. This proposal sat dormant until 2007, when the telephone industry and the California Public Utilities Commission began studying implementing this 818/747 split, or possibly an overlay of all of 818 with 747. Public hearings were held, and the overall public sentiment was for an overlay rather than the split, since they could retain the 818 area code for their existing telephone numbers. The new 747 area code would be used for numbers associated with new service.

On April 24, 2008, the CPUC decided that area code 747 would overlay area code 818 effective May 18, 2009. [1] From that date, new numbers could be assigned to the new area code. Callers within the 818 and 747 area codes would be required to dial the area code (including calls to the same area code; cell phones could dial with or without the "1" prefix) for all calls. There was a grace period starting October 11, 2008 during which callers could still complete calls using the seven-digit number. Since mid-April 2009, calls must be dialed with the area code and number; otherwise, the call will not be completed (cell phone users can omit the "1"). [2]

The 747 area code conflicted with 10-digit Session Initiation Protocol addresses on some VoIP networks such as Gizmo5 (in the format 747NXXXXXX). Because of this conflict, some outgoing calls from VoIP networks using a 10-digit SIP address could have been mistaken for calls originating from the actual 747 area code.

These addresses are no longer in use as Gizmo5 service was discontinued as of April 3, 2011.

In the movie Pulp Fiction, after Vincent accidentally shoots their associate in the face, Jules calls his friend Jimmy in order to find a place to hide their blood-soaked automobile, telling Vincent he hopes Jimmy is home "because I ain't got no other partners in 818".

In the movie Go, Ronna tells Claire not to "go 818 on me" when she acts reluctant to do some of the film's illegal/dangerous activities.