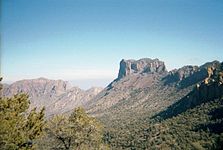 Casa Grande is a prominent peak in the Chisos Mountains of the Big Bend area of west Texas. The view is from the Pinnacles Trail in Big Bend National Park.

The Big Bend is part of the Trans-Pecos region in southwestern Texas, United States along the border with Mexico, north of the prominent bend in the Rio Grande for which the region is named. [1] Here the Rio Grande passes between the Chisos Mountains in Texas and the Sierra Madre Oriental in Mexico as it changes from running east-southeast to north-northeast. The region covers three counties: Presidio County to the west, Brewster County to the east, and Jeff Davis County to the north. [2]

The region is sparsely populated, arid, and rugged, containing the Chisos Mountains and the Davis Mountains. The region has more than 1 million acres (4,000 km2) of public lands, including Big Bend National Park and Big Bend Ranch State Park along the north side of the Rio Grande. It is also the home of the McDonald Observatory.