From Wikipedia, the free encyclopedia
(Redirected from Afghan American)
For Pashtuns in the United States, see Pashtun Americans.

Afghan Americans have a long history of immigrating to the United States, as they have arrived as early as the 1860s. [7] [8] This was around the time when Afghanistan–United States relations were being established. Wallace Fard Muhammad, claimed to have been from Afghanistan. A World War I draft registration card for Wallie Dodd Fard from 1917 indicated he was living in Los Angeles, California, as an unmarried restaurant owner, and reported that he was born in Shinka, Afghanistan in 1893. [9] Between the 1920s and 1940s, hundreds of Afghans immigrated to the United States. [8] [10] [11] Between 1953 and early 1970, at least 230 lawfully entered the United States, meaning that the U.S. government was aware of their entry. [8] Some of those who entered the United States were students who had won scholarships to study in American universities.

After the 1979 Soviet invasion of Afghanistan, around five million Afghan citizens were displaced, being forced to immigrate or seek refuge in other countries. These Afghan refugees mostly settled in neighboring Pakistan and Iran, and from there many made it to the European Union (EU), North America, Australia, and elsewhere in the world.

Those who were granted refugee status in the United States began to settle in the New York metropolitan area, California (mainly in the San Francisco Bay Area and the Los Angeles- Orange County area) and in the Northeastern United States, where large Muslim community centers keep them closely bonded. Fremont, California, is home to the largest population of Afghan Americans followed by Northern Virginia. [12] Smaller Afghan American communities also exist in the states of Colorado, Florida, Illinois, Maryland, New Jersey, Pennsylvania, Texas, Washington and Washington, D.C.[ citation needed] In the city of Chicago, the 2000 census counted 556 Afghans, approximately half of them within the city. [13]

According to the U.S. Census Bureau, there were approximately 65,972 Afghan-Americans living in the country in 2006. The American Community Survey (ACS) estimates a total of 94,726 Afghan foreign-born immigrants residing in the United States in 2016, which shows a 30% increase in the last ten years. [14] Congress passed the Afghan Allies Protection Act in 2009, which was motivated by the ongoing War on Terror. This Act stated that Afghans who agreed to work with the U.S. government as translators and interpreters in Afghanistan are eligible for special immigrant visas (SIVs) after completing one year of employment. Because these individuals put their lives at risk for the interest of U.S. intelligence, Afghans eligible for SIVs are able to use this as a pathway towards lawful permanent residence for both themselves and their immediate family members. [15] Since 2005, tens of thousands of Afghans have been admitted to the United States under special programs such as the Special Immigrant Visa. [16] From the fiscal year of 2007 to 2015, a total of 19,916 Afghans were issued a Special Immigrant Visa. [17]

Like all other immigrants living in the United States, Afghan Americans have gradually adopted the American way of life but some still value their traditional culture. They watch Afghan television stations, listen to Afghan music, and eat traditional Afghan food at home. They also value their oral tradition of story telling. The stories they usually tell are about Nasreddin, Afghan history, myths and religion. [8]

Afghan Americans celebrate August 19 as "Afghan Day". [18] It is a commemoration of the Afghan Independence Day, which relates to August 1919, the date when Afghanistan became globally recognized after the Anglo-Afghan Treaty of 1919 was signed. Eid and Nowruz remain popular festivals for Afghans. Small festivals are held in cities that have Afghan communities, usually at the parks where black, red and green colored Afghan flags are spotted around cars. [19] 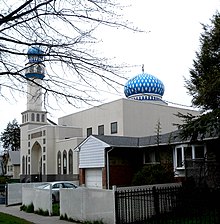 Afghan Americans are composed of the various ethnic groups that exist in Afghanistan, which include Pashtun, Tajik, Hazara, Uzbek, and a number of others. In a 2002 analysis, American researchers reported that approximately 65% of Afghan Americans are ethnic Tajiks. [20] For the purpose of the United States Census in 2000, Afghans were racially categorized as being White American; [21] individual Afghan Americans may self identify as being Asian, Middle Eastern, or white. [22]

Most Afghan Americans are Muslims, the majority of whom follow Sunni Islam, with a sizable community of Shia Muslims.

There is a community of Afghan Jews in New York City, numbering about 200 families in 2007. [6] In addition, a group of Afghan Americans in the Los Angeles area follow Christianity. [23] Hussain Andaryas is an Afghan Christian televangelist who belongs to the Hazara ethnic group.

Outside of the Abrahamic faiths, there exists a community of Afghan Hindus and Sikhs, concentrated in New York and Maryland. [5] [24]

Afghan immigrants that arrived to the United States before 1979 were well-educated. [8] In contrast, current immigrants have fled Afghanistan after it destabilized during the 1979 Soviet occupation as this group has had trouble coping with learning a new language. [8] Those who have pursued their education in America in the middle 20th century and traveled back to Afghanistan, faced trouble attaining employment when returning to the United States since their education, often in medicine and engineering, is frequently viewed as outdated. [8] After the Soviet invasion, Afghanistan's education system worsened, causing many migrants in the late 20th century to place less emphasis on educational attainment. [8]

Some of the latest Afghan immigrants can be found as vendors in Manhattan where they have replaced Greek Americans in the field. [25] 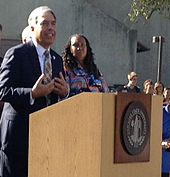 Khaled Hosseini at the White House in 2007, with Bush and Laura Bush.

A U.S. soldier with an Afghan American interpreter in Jalalabad, Nangarhar Province, Afghanistan.

After the September 11 attacks in 2001, a mosque run by Afghan-Americans in New York City donated blood, held a vigil for those who died inside the World Trade Center (WTC) and funded a memorial for NYC fire fighters. [37] Since late 2001, after the start of America's longest war, many Afghan-Americans have worked alongside the United States Armed Forces as interpreters, contractors and journalists. A number of them were wounded or killed while on duty inside Afghanistan.