From Wikipedia, the free encyclopedia
This article is about the structure. For the networking company, see Unisphere Networks.
Steel structure in Queens, New York

The Unisphere is a spherical stainless steel representation of the Earth in Flushing Meadows–Corona Park, in the New York City borough of Queens. The sphere, which measures 140 feet (43 m) high and 120 feet (37 m) in diameter, was designed by Gilmore D. Clarke as part of his plan for the 1964 New York World's Fair. [1]

The Unisphere sits atop a 20-foot-tall (6.1 m) base with over 500 steel pieces representing the continents, as well as three steel rings representing the first artificial satellites orbiting Earth. Around the Unisphere is a reflecting pool measuring 310 feet (94 m) in diameter and surrounded by 48 pairs of fountainheads.

Flushing Meadows–Corona Park, a former ash dump in the borough of Queens, was used for the 1939/1940 New York World's Fair. At the conclusion of the fair, it was used as a park. [2] [3] The Flushing Meadows site was selected in 1959 for the 1964 New York World's Fair. [4] Gilmore David Clarke and Michael Rapuano, designers of the original World's Fair layout, were retained to tailor the original 1939 park layout for the new fair. [5] [6] New York City parks commissioner Robert Moses was president of the World's Fair Corporation, which leased the park from the city until 1967, after the fair's completion. [7]

After the 1964 fair was announced, Moses initially asked designer Walter Dorwin Teague to create a "Theme Center". Teague designed the center as a 170-foot-tall (52 m) inverted cone surrounded by a spiral, rising from a reflecting pool. Moses declined the proposal as resembling a "cross between a part of a brake engine and a bed spring, or should I say between a Malayan Tapir and a window shutter." [8] Another proposal was devised by Paul Rudolph on behalf of the Portland Cement Association. This plan called for a saucer measuring 300 feet (91 m) in diameter and tilted 18 degrees from the ground, with a restaurant, exhibits, educational and recreational facilities, and "planetary viewing stations". [9] [10] Moses also rejected Rudolph's proposal. [8]

The Unisphere under construction in the 1960s [11] 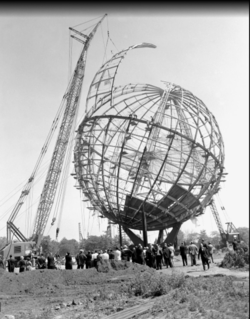 Moses announced plans for the Unisphere in February 1961 [12] and a model of the proposed work was unveiled the following year. [13] The Unisphere was initially conceptually designed by Clarke in aluminum with metallic mesh continents. [6] [14] According to Moses, the Unisphere "illustrates, symbolizes and embodies man's achievements on a shrinking globe in an expanding universe." [15] Moses's idea for the Unisphere was inspired by a sketch of a metal armillary that Clarke had drawn on the rear of an envelope. [16] It underwent a further refined industrial design in stainless steel by industrial designers at Peter Muller-Munk Associates. [8] [17] [18] The final design was similar to the original, except for the inclusion of fountains surrounding the Unisphere. [6]

The structure was constructed by American Bridge Company, a division of U.S. Steel, and in practice was used to advertise that company's products. [6] [14] [8] The sphere was built within 110 days. [19] The last landmass was installed on August 13, 1963. [20] U.S. Steel's board chairman Roger Blough took credit for the structure, but gave an award to M. Legrain-Eiffel, the grandson of the Eiffel Tower's creator Gustave Eiffel. [21]

The Unisphere was dedicated in early March 1964 [21] and became the representation of the 1964 World's Fair. [8] [22] During the fair, dramatic lighting at night gave the effect of sunrise moving over the surface of the globe. Additionally, the capitals of nations were marked by lights. [22] One of these lights is placed at the location of the Kahnawake Indian Reservation, which the Mohawk ironworkers requested to be placed there to honor their labor. [23] During the course of the fair, 51 million people visited the Unisphere. [24]

In 1966, after the conclusion of the fair, US Steel donated $100,000 to make the Unisphere a permanent attraction at Flushing Meadows-Corona Park. [25] The park was reopened the next year following a major renovation, and the Unisphere was permanently retained as a park feature. [26] In subsequent years, the Unisphere fell into disrepair, being covered in grime by the 1970s, while the pools were shut off and tagged with graffiti. [22]

In 1989, the New York City Department of Parks and Recreation announced a multimillion-dollar rehabilitation of Flushing Meadows-Corona Park. Among the projects was a complete restoration of the Unisphere. The project, which began in 1993, included numerous structural repairs and removal of years' worth of grime accumulation on the steel. The fountains, shut off since the 1970s, were replaced, and new floodlighting installed. [27] [28] Furthermore, two of the surrounding lawns were planted with rose gardens. [29] The restoration was completed in May 1994. [27] That year, the Annual Building Awards in Queens gave the Unisphere an award for best rehabilitation. [30] In May 1995, the New York City Landmarks Preservation Commission designated the Unisphere an official city landmark. [31] [1]

The Unisphere's fountain reopened on August 12, 2010, after a $2 million restoration of its pumps, valves, and paintwork. [32] [33] In addition, the globe and its surroundings, including its reflecting pool and fountains, were renovated at a cost of $3 million. [1] In the September 2010 Brooklyn/Queens tornadoes, the landmass representing Sri Lanka was blown off the Unisphere; the piece was reinstalled the following year. [34]

Three large orbit rings of stainless steel encircle the Unisphere at various angles. These orbit rings are believed to represent the tracks of Yuri Gagarin, the first man in space; John Glenn, the first American to orbit the Earth; and Telstar, the first active communications satellite. [22] [37] The early design was to have a ring for each of a dozen satellites in place at the time of the Fair. This proved impractical, not only in the number of satellites, but also in the height of their orbits and the fact that geostationary satellites had no orbit path. As a result, a symbolic number of three was chosen for aesthetic reasons. [37] The three rings were connected with aircraft cable to the rest of the structure. [22]

The landmasses of the Unisphere are made of metal sheets that are laid in contours. The shapes had to be placed at regular intervals while also accurately representing the globe, and could not be cross-braced or overly thick; furthermore, wind was trapped by the shapes' concave inner surfaces. As such, a stress transfer pattern was developed, and the meridians and parallels were varied in dimension, thereby making the Unisphere structurally stable as well as accurate in design. [22] U.S. Steel's administrative vice president Austin J. Paddock said that some 670 mathematical equations needed to be solved simultaneously to determine the exact layout of the Unisphere. [21] [35] The shape of the steel sheets was devised using a computer. [16]

The Unisphere is centered in a 310-foot-diameter (94 m) circular reflecting pool, with a floor of poured concrete surrounded by a bulkhead of granite and concrete. Forty-eight pairs of fountainheads, on the outer edge of the pool, are designed to obscure its tripod pedestal. The effect is meant to make the Unisphere appear as if it is floating in space. There are plaques facing the four major paths that extend north, northeast, southeast, and south from the Unisphere. [22] From the perimeter of the reflecting pool, the Unisphere is meant to depict the Earth as seen from 4,000 miles (6,400 km) away. [38] 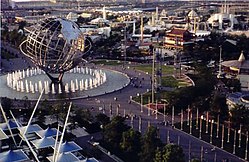 The then-newly built Unisphere during the 1964–1965 World's Fair

The Unisphere is built on a concrete foundation, which includes the piling ring that supported the Perisphere of the 1939 World's Fair. [22] [14] The marshy soil of Flushing Meadows needed special consideration during the original 1937 Perisphere construction. The Perisphere, and subsequently the Unisphere, employed a foundation of 528 pressure- creosoted Douglas fir piles of 95 to 100 feet (29 to 30 m) in length. Before construction of the Unisphere, three piles were tested for structural integrity and all were found to be sound throughout their entire length. [39] Six hundred additional piles were built specifically for the Unisphere. [16]

Climbs on the Unisphere

In popular culture: The Unisphere was climbed in 1976 by George Willig (the so-called "Human Fly" who would later climb the World Trade Center), and Jery Hewitt as part of a short film called “The Third Stone.”

Climate Activist Group: The Unisphere was not again scaled until September 6, 2019, when Glen Schleyer, a member of the climate activist group Extinction Rebellion, climbed the Unisphere to hang up a banner protesting the 2019 Amazon rainforest wildfires. He chose the Unisphere because it celebrates the World's Fair theme of "peace through understanding". [40]

When originally proposed, the Unisphere was negatively received by critics, who called it "probably one of the most uninspired designs we have ever seen", according to The Village Voice. [21] After the Unisphere was completed, it remained a tourist attraction through the 21st century. [41] According to Smithsonian magazine, "The Unisphere became the space age logo of the fair, a steel Earth at the Ptolemaic hub of a Googie-style Jetsons universe", despite the overall limited success of the 1964 World's Fair. [16] The New York Times, in 2014, said the Unisphere was the only relic of the World's Fair that "was untarnished by time and enhanced by memory". [24]

The Unisphere has been used as a setting or backdrop for several films, music videos and episodes, notably the American sitcom The King of Queens; the TV show CSI: NY; the Marvel Cinematic Universe films Iron Man 2, Captain America: The First Avenger, and Spider-Man: Homecoming; and the movie Men in Black. [41] [42] It has also been the subject of Seth Fein's experimental documentary, Between Neighborhoods (2018). [43] [44]