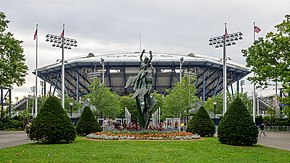 The USTA Billie Jean King National Tennis Center is a stadium complex within Flushing Meadows–Corona Park in Queens, New York City, United States. It has been the home of the US Open Grand Slam tennis tournament, played every year in August and September, since 1978 and is operated by the United States Tennis Association (USTA). [1] The facility has 22 courts inside its 46.5 acres (0.188 km2; 0.0727 sq mi) [2] and 12 in the adjoining park. The complex's three stadiums are among the largest tennis stadiums in the world; Arthur Ashe Stadium tops the global list with a listed capacity of 23,200. [3] All 33 courts have used the DecoTurf cushioned acrylic surface since the facility was built in 1978.

Near Citi Field (home of the New York Mets) as well as LaGuardia Airport, the tennis center is open to the public for play except during the US Open, junior and wood-racquet competitions. [4] 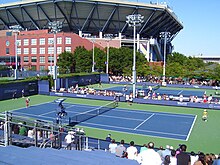 Some of the side courts, with Ashe Stadium in the background, before the canopy was added 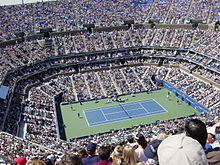 The idea of the tennis center came about in January 1977, when William Hester, the then-incoming president of the USTA, saw the underused Singer Bowl on a flight into nearby LaGuardia Airport. He asked the City of New York to let him use the stadium and adjoining land for a tennis facility to host the U.S. Open. The stadium was heavily renovated and divided into two venues: Louis Armstrong Stadium and the adjoining grandstand. The National Tennis Center opened in August 1978. [1] [5]

After rumors of a possible move to San Diego, a major upgrade and expansion began in March 1995. More land was committed to the USTA National Tennis Center, and in August 1997 the newly built Arthur Ashe Stadium replaced Louis Armstrong Stadium as the main court. The four-year expansion was completed in 1999. Arthur Ashe Stadium holds more than 22,000 spectators while Louis Armstrong Stadium was downsized to hold just 10,000 spectators (the original size was 18,000). [1] In 2006, at the location of the old indoor tennis building near the East Gate, work began on a 245,000-square-foot, multi-purpose tennis pavilion. [1] The new facility was completed in 2008 [2] and includes 12 courts, classrooms, fitness facilities, and a pro shop. [1] It also includes a hospitality center, museum, and food commissary. [1] Other renovations included the players’ lounge, locker rooms, and medical, training and office space. [1]

In 2011, the facility opened a new show court, Court 17, located in the southeast corner of the grounds, seating 2,500 to 3,000, making it small in comparison to the facility's other show courts. Next in size after those courts — Arthur Ashe Stadium, Louis Armstrong Stadium, and the Grandstand (the latter with a capacity of 8,125) — the court has large television screens and Hawk-Eye electronic line-calling capability which allows for player challenges. In constructing the new court, foundations from the 1939 and 1964 World's Fair were discovered, and the water table was found to be several feet higher than expected. [2] Because the playing surface of Court 17 is below ground level, the new court has received the nickname of "The Pit".

The center is[ when?] in the middle of a $550 million renovation that has included the erection of a retractable roof on Arthur Ashe Stadium, which was completed for the 2017 US Open. A new show court was opened in 2016 in the southwest corner of the complex. It has 8,125 seats, making it the third largest court in the center, and replaces the old Grandstand. A new, 14,000-seat Louis Armstrong Stadium (also with a retractable roof) has been constructed on the site of the original stadium, and was completed in time for the 2018 US Open. [6]

In July 2008, the USTA Billie Jean King National Tennis Center and Arthur Ashe Stadium hosted its first ever non-tennis event, when the New York Liberty of the Women's National Basketball Association (WNBA) played in the " Liberty Outdoor Classic: 2008". The game itself was the first ever professional basketball regular season game ever played outdoors in the USA, by either men or women. The contest featured the Indiana Fever defeating the New York Liberty. [7]

USTA Billie Jean King National Tennis Center is[ when?] the site of the annual New York State High School tennis championships, held in May.[ when?] This tournament is sponsored by the New York State Public High School Athletic Association (NYSPHSAA).

In March 2020, due to the COVID-19 pandemic, the city proposed building a temporary 350-bed field hospital in the Billie Jean King National Tennis Center to treat overflow patients from area hospitals. [8] It opened on April 10 and was later described by The New York Times as a "cautionary tale" of mismanaged government responses, having cost at least $52 million while only treating 79 patients until it closed on May 13. [9]