From Wikipedia, the free encyclopedia
A 451.9 meter tall twin supertall skyscraper in Malaysia
For the nearby smaller tower with a different appearance, see Petronas Tower 3.

The Petronas Towers' structural system is a tube in tube design, invented by architect Fazlur Rahman Khan. [7] [8] Applying a tube-structure for extreme tall buildings is a common phenomenon. [9] [10] The 88-floor towers are constructed largely of reinforced concrete, with a steel and glass facade designed to resemble motifs found in Islamic art, a reflection of Malaysia's Muslim religion. [11] Another Islamic influence on the design is that the cross section of the towers is based on a Rub el Hizb, albeit with circular sectors added to meet office space requirements. [12] The circular sectors are similar to the bottom part of the Qutub Minar. 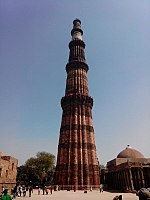 The cross section of the Petronas Towers is based on a Rub el Hizb, albeit with circular sectors similar to the bottom part of the Qutub Minar.

The towers were designed by Argentine-American architect César Pelli. A distinctive postmodern style was chosen to create a 21st-century icon for Kuala Lumpur, Malaysia. Planning on the Petronas Towers started on 1 January 1992 and included rigorous tests and simulations of wind and structural loads on the design. Seven years of construction followed at the former site of the original Selangor Turf Club, beginning on 1 March 1993 with excavation, which involved moving 500 truckloads of earth every night to dig down 30 metres (98 ft) below the surface. The construction of the superstructure commenced on 1 April 1994. Interiors with furniture were completed on 1 January 1996, the spires of Tower 1 and Tower 2 were completed on 1 March 1996, 3 years after its construction was started, and the first batch of Petronas personnel moved into the building on 1 January 1997. The building was officially opened by the Prime Minister of Malaysia, Tun Dr. Mahathir bin Mohamad, on 31 August 1999. [14] The twin towers were built on the site of Kuala Lumpur's race track. It was the tallest structure in Malaysia at the time of its completion. [15] Test boreholes found that the original construction site effectively sat on the edge of a cliff. One half of the site was decayed limestone while the other half was soft rock. The entire site was moved 61 metres (200 ft) to allow the buildings to sit entirely on the soft rock. [16] Because of the depth of the bedrock, the buildings were built on the world's deepest foundations. [17] 104 concrete piles, ranging from 60 to 114 metres (197 to 374 ft) deep, were bored into the ground. The concrete raft foundation, comprising 13,200 cubic metres (470,000 cu ft) of concrete was continuously poured through a period of 54 hours for each tower. The raft is 4.6 metres (15 ft) thick, weighs 32,500 tonnes (35,800 tons) and held the world record for the largest concrete pour until 2007. [16] The foundations were completed within 12 months by Bachy Soletanche and required massive amounts of concrete. [18]

As a result of the Malaysian government specifying that the buildings be completed in six years, two construction consortia were hired to meet the deadline, one for each tower. Tower 1, the west tower (left in the top-right photograph) was built by a Japanese consortium led by the Hazama Corporation ( JA Jones Construction Co., MMC Engineering Services Sdn Bhd, Ho Hup Construction Co. Bhd and Mitsubishi Corp) while Tower 2, the east tower (right in the top-right photograph) was built by a South Korean consortium led by the Samsung C&T Corporation (Kukdong Engineering & Construction and Syarikat Jasatera Sdn Bhd).

Early into construction a batch of concrete failed a routine strength test causing construction to come to a complete halt. All the completed floors were tested but it was found that only one had used a bad batch and it was demolished. As a result of the concrete failure, each new batch was tested before being poured. The halt in construction had cost US$700,000 per day and led to three separate concrete plants being set up on the site to ensure that if one produced a bad batch, the other two could continue to supply concrete. The sky bridge contract was completed by Kukdong Engineering & Construction. Tower 2 (Samsung C&T) became the first to reach the world's tallest building at the time.

Due to the huge cost of importing steel, the towers were constructed on a cheaper radical design of super high-strength reinforced concrete. [19] High-strength concrete is a material familiar to Asian contractors and twice as effective as steel in sway reduction; however, it makes the building twice as heavy on its foundation as a comparable steel building. Supported by 23-by-23 metre concrete cores [20] and an outer ring of widely spaced super columns, the towers use a sophisticated structural system that accommodates its slender profile and provides 560,000 square metres of column-free office space. [21] Below the twin towers is Suria KLCC, a shopping mall, and Petronas Philharmonic Hall, the home of the Malaysian Philharmonic Orchestra.

Tower One is fully occupied by Petronas and a number of its subsidiaries and associate companies, while the office spaces in Tower Two are mostly available for lease to other companies. [28] A number of companies have offices in Tower Two, including SapuraOMV Upstream (Sarawak) Inc., Huawei Technologies, AVEVA, Al Jazeera English, Carigali Hess, Bloomberg, Boeing, IBM, Khazanah Nasional Berhad, McKinsey & Co, WIPRO Limited, TCS, HCL Technologies, Krawler, Microsoft, The Agency (a modelling company) and Reuters.

(the given chart is the floor arrangement according to the level arrangement.)

Suria KLCC is a 140,000 m2 (1,500,000 sq ft) upscale retail center at the foot of the Petronas Towers. It features mostly foreign luxury goods and high-street labels. Its attractions include an art gallery, an underwater aquarium and also a Science center. Boasting approximately 300 stores, Suria KLCC is touted as one of the largest shopping malls in Malaysia. [29] The Petronas Philharmonic Hall, also built at the base of the towers, is frequently associated with Suria KLCC's floorspace. During holidays or celebration days , Suria KLCC is the top spot to see the beautiful decorations especially at the main entrances and also in Centre Court. It also promotes the uniqueness and beauty of Malaysia’s cultural diversity towards the visitors. 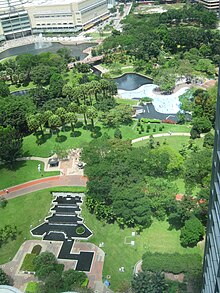 Spanning 17 acres (6.9 ha) below the building is the KLCC Park with jogging and walking paths, a fountain with incorporated light show, wading pools, and a children's playground.

The towers feature a double decker skybridge connecting the two towers on the 41st and 42nd floors, which is the highest 2-story bridge in the world. [30] It is not attached to the main structure, but is instead designed to slide in and out of the towers to prevent it from breaking, [31] as the towers sway several feet[ specify] in towards and away from each other during high winds. It also provides some structural support to the towers in these occasions. The bridge is 170 m (558 ft) above the ground and 58.4 m (192 ft) long, weighing 750 tons. [32] The same floor is also known as the podium, since visitors going to higher levels have to change elevators here. The skybridge is open to all visitors, but tickets are limited to about 1,000 people per day, and must be obtained on a first-come, first-served basis. Initially, the visit was free but in 2010, the tickets started being sold by Petronas. Visitors can choose to opt for package one which is just a visit to the skybridge or go for package two to go to the skybridge and all the way to level 86. [33] Visitors are only allowed on the 41st floor as the 42nd floor can only be used by the tenants of the building. [34]

The skybridge also acts as a safety device, so that in the event of a fire or other emergency in one tower, tenants can evacuate by crossing the skybridge to the other tower. [35] The total evacuation triggered by a bomb hoax on 12 September 2001 (the day after the September 11 attacks destroyed the twin towers of the World Trade Center in New York City) showed that the bridge would not be useful if both towers need to be emptied simultaneously, as the capacity of the staircases was insufficient for such an event. [36] Plans thus call for the lifts to be used if both towers need to be evacuated, and a successful drill following the revised plan was conducted in 2005.

There is a two hinged arch that supports the skybridge with arch legs, each 51 metres (167 ft) long, that are bolted to level 29 of each of the towers. [37] After being constructed on the ground, the skybridge was lifted into place on the towers over a period of three days [38] in July 1995. [37] Instead of being directly connected to the towers, the skybridge can shift or slide in and out of them to counterbalance any effect from the wind. Residing on the 41st and 42nd floors, the skybridge connects a conference room, an executive dining room and a prayer room. [38]

The lift operating chart of the Petronas Towers

In order to visit the Petronas Towers, visitors must first purchase tickets. Tickets can be purchased online or at the counter. Discounted tickets for seniors are available for those 55 years of age and above. Queues for tickets can get quite long sometimes. The complete ticketing system is provided by the Malaysian-based Longbow Technologies Sdn Bhd.[ citation needed]