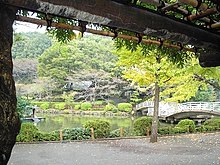 One of the ponds of Yakushi-Ike Park in Machida 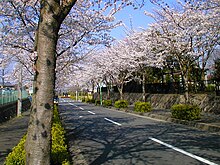 A road lined with cherry blossom trees in Machida

Machida is located in the Tama Hills of southern Tokyo Metropolis, bordered by Kanagawa Prefecture on the west, south, and east approximately 40 to 50 kilometers from the center of Tokyo. The highest point is Mount Kusato (elevation 364 meters) at the western end. There are few flatlands near Machida Station, the Sakai River flows to the west and south, and the Tsurumi River flows almost in the center of the city.

Machida has a Humid subtropical climate (Köppen Cfa) characterized by warm summers and cool winters with light to no snowfall. The average annual temperature in Machida is 14.0 °C. The average annual rainfall is 1621 mm with September as the wettest month. The temperatures are highest on average in August, at around 25.3 °C, and lowest in January, at around 2.8 °C. [2]

Per Japanese census data, [3] the population of Machida increased rapidly from the 1960s.

The area of present-day Machida was part of ancient Musashi Province. In the post- Meiji Restoration cadastral reform of July 22, 1878, the area became part of Minamitama District in Kanagawa Prefecture. The village of Machida was created on April 1, 1889 with the establishment of modern municipalities system. Minamitama District was transferred to the administrative control of Tokyo Metropolis on April 1, 1893. Tama was elevated to town status on April 1, 1913. The town was bombed by American forces on May 24, 1945 during World War II.

Machida expanded through annexation of the neighboring village of Minami on April 1, 1954, followed by the villages of Tsurukawa, Tadao and Sakai on February 1, 1958 to become the city of Machida. A USMC RF-8A crashed in a residential area Machida on April 1, 1964, killing four people. From 1973, the Tama New Town development resulted in a rapid increase in population, turning the city into a bedroom community for Tokyo and Yokohama.

Machida has a mayor-council form of government with a directly elected mayor and a unicameral city council of 36 members, whose members are elected for a four-year term. Machida contributes four members to the Tokyo Metropolitan Assembly. In terms of national politics, the city is part of Tokyo 23rd district of the lower house of the Diet of Japan.