From Wikipedia, the free encyclopedia
State affiliate of the Libertarian Party

In 1972 the party considered suing county clerks in Placer and Butte counties for refusing to allow voters to register as Libertarians. [8] In 1978 Ed Clark, who had been the affiliate's chairman from 1973 to 1974 and later the national presidential candidate in 1980, ran as an independent for governor of California to gain party recognition and received over five percent. [9] However, the Secretary of State ruled that the two percent requirement was for retaining party recognition and not gaining party recognition and that since Clark had run as an independent and not a Libertarian it would not count either way. [10] The party filed a lawsuit against the decision, but it was first dismissed then ruled against on appeal. The Libertarian Party of California has hosted the Libertarian National Convention in 1977, 1979, 1980, and in 2000. 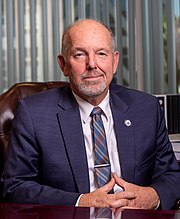 Libertarian voter registration in the state of California has experienced significant growth. [26]

There are semi-autonomous county central committees for many of California's 58 counties. The counties which currently have active affiliates are as follows: