From Wikipedia, the free encyclopedia
Not to be confused with Chula Vista, California.
City in California

Vista ( /ˈvɪstə/; Spanish: view) is a city in Southern California and is located in northwestern San Diego County. Vista is a medium-sized city within the San Diego-Carlsbad, CA Metropolitan Area and has a population of 101,638. Vista's sphere of influence also includes portions of unincorporated San Diego County to north and east, with a county island in the central west. [9] Located just seven miles inland from the Pacific Ocean, it has a Mediterranean climate.

The flag of Vista is its seal on a blue background. It can be viewed here in Google Street View.

Originally the lands of Rancho Buena Vista and Rancho Guajome, Vista was founded on October 9, 1882, with the establishment of a post office. [10] It was incorporated on January 28, 1963, and became a charter city on June 13, 2007.

Vista has more than 25 educational institutions for youth, and a business park home to over 800 companies. Vista is ranked as the 173rd-best place in California (out of 240) for families, based on factors such as family life, recreational opportunities, education, health, safety, and affordability in a 2015 review.

The Vista area was originally inhabited by the Luiseño Indians, who lived on the land until the founding of the San Luis Rey Mission in 1798. The prosperity of the mission-era declined by the 1830s with the independence of Mexico from Spain. The Mexican government began to grant land ownerships to a variety of people, thus beginning the Rancho era of California. Three ranchos were granted in the Vista area: Rancho Guajome, Rancho Buena Vista, and Agua Hedionda Y los Manos. [11]

In the 1850s the ranchos began to fade due to changing political conditions and the scarcity of water. A growing number of settlers came to the area after California became a state in 1850 and began to create smaller agricultural holdings. One settler in the Vista area, John Frazier, applied to open the first post office and after several attempts to name the city (Frazier's Crossing and Buena Vista were already taken), Frazier finally chose the name "Vista". With the opening of the first post office in 1882, Vista had officially arrived. [12]

In 1870, Bernard Delpy arrived from France to build what eventually became known as "Delpy Corners" at the intersection of today's East Vista Way and Foothill Drive. His nephew, Jules Jacques Delpy, joined him in 1879 and together they planted several hundred acres of grapes. In 1886, they built the first successful winery in the country. The winery was shut down by the prohibition era. [13]

Inhibited by the lack of water, Vista grew slowly through the early 1910s to less than 1,000 people. With the vote of the people in 1923, the Vista Irrigation District had the necessary funding to construct a new water supply from Lake Henshaw. [14] New buildings in downtown sprang up almost immediately. Agriculture began to flourish with crops such as tomatoes, celery, and citrus fruits. Some hillsides were also planted for avocados and by 1948, the Vista became the "avocado capital of the world" [15]

Following World War II, agriculture declined with an influx of growth of population and housing. The City of Vista was incorporated on January 23, 1963. The frequent housing booms of the 1970s through early 2000s greatly increased the population of Vista. Numerous apartment complexes were also built in these booms. Many light manufacturing businesses moved into the Business Park area on the south side, starting in the 1980s. In the 1990s, Wal-Mart, Target and Costco opened large stores. In 1993, Vista became involved in a national controversy when the Vista Unified School District board unsuccessfully tried to incorporate creationist, anti-evolution views into the biology curriculum. [16] 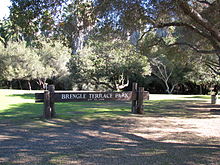 According to the United States Census Bureau, the city has a total area of 18.7 square miles (48 km2), all land. Vista is a hilly city. Most of the businesses are located in the flatter areas, and residences climb the hills. In undeveloped areas, the natural vegetation types includes chaparral brushland, oak-sycamore woodland, riparian (stream) woodland and oak-grass savanna. The natural vegetation is best seen in natural Buena Vista Park on the south side, in the San Marcos Hills east of the city, and in undeveloped pockets on the north side (e.g. along Gopher Canyon Road and Guajome Regional Park).

Climate is temperate, with extremes of temperature uncommon. Coastal breezes and foggy overcast (especially in May and June) keep the late spring/early summer high temperatures below 80 °F (27 °C). on most days. The cool, overcast conditions are often called "May gray" and "June gloom" by Vistans. In general, the western side of the city (closer to the Pacific) is cooler and more overcast with ocean fog than the eastern side. It is common in May–June for the western side of Vista to be overcast and cool, while the eastern side basks in clear skies and sunshine. July, August and September are usually warmer, as the coastal breezes lessen. High temperatures in excess of 90 °F (32 °C). (rarely above 100 °F (38 °C)) sometimes occur in late summer. High temperatures also accompany dry Santa Ana wind events, which can strike any month, but are most common during fall. On 90% of days, though, the moderating influence of the nearby Pacific keeps the weather pleasant and temperatures moderate. Frost is quite rare in winter, and snowfall almost unknown. Most of the annual rainfall of 13.24 inches (336 mm) falls between November and April (Mediterranean climate type). Rainfall is higher in the San Marcos Hills on the eastern edge of the city, up to 20 inches (510 mm) per year. The moderate climate has made Vista and surrounding areas a center of the plant nursery industry. Avocados and other subtropical plants thrive in the area.

According to the City's 2019 Comprehensive Annual Financial Report, [22] the top employers in the city are: 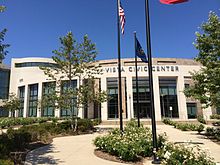 Vista Civic Center. The flag of Vista is visible in the background (blue flag, center).

Vista, a charter city, is governed by a mayor, Judy Ritter, and a city council, consisting of John B. Franklin (Deputy Mayor), Amanda Rigby, Joe Green and Corrina Contreras. [2]

In the United States House of Representatives, Vista is in California's 49th congressional district, which has a Cook PVI of R+1 [24][ circular reference] and is represented by Democrat Mike Levin. [25] According to the San Diego County Registrar of Voters, on 11/1/2016, the City of Vista had more registered Democrats than Republicans. Out of a total of 40,837 registered voters, 13,859 were Democrats, and 13,507 were Republicans. [26]

Vista was mentioned in The Los Angeles Times when a group of social conservatives associated with the " Christian right" were elected to the Vista Unified School District's school board and tried to implement creationism into the curriculum in the early 1990s. [27]

Biola University has a branch campus in Vista. [28] Brightwood College (formerly known as Kaplan College) had a campus in Vista until the college's sudden closure in 2018. [29]

Vista is home to two city-owned theaters: the recently updated Moonlight Amphitheatre and the Avo Playhouse. The Moonlight is an open-air theater that specializes in musical productions, performing several Broadway caliber, musical productions during the course of the summer. A winter season concert venue called ClubM hosts shows where the performance and audience areas are on the Moonlight stage, sheltered from the elements. The Avo Playhouse located in historic downtown Vista is rented year round for private performances.

Vista houses one movie theater, currently a Cinepolis theater (as of 2015), but which opened as a Krikorian Cinema in fall 2003.

Two of the best-known parks in the city are Brengle Terrace Park and Guajome County Park. Brengle Terrace Park houses the Moonlight Amphitheatre, Alta Vista Gardens (a city-owned botanical garden), two softball fields, a senior center, a playground, and the city community center, where the main offices of the city's day camps are held. Guajome County Park has 557 acres (2.25 km2) of land, which is shared between Vista and nearby Oceanside. It features a small lake, willow and oak woodlands, campsites, horse trails, and the Rancho Guajome Adobe, a National Historic Landmark. Buena Vista Park on the south side of Vista is a natural park where users can hike on trails through native chaparral and oak woodland.

The Rancho Guajome Adobe and Rancho Buena Vista Adobe are two historic rancho buildings in Vista, built in the mid-nineteenth century, both available for tours and special occasions.

The city's Parks and Recreation Department runs the Wave Waterpark, a small but well-equipped waterpark in the downtown area open from mid-spring to early fall, and the brand new Vista Community Sports Park. Another attraction is the Antique Gas and Steam Engine Museum, an open-air museum demonstrating agricultural equipment from the 19th and early 20th centuries. A Boomers family fun park is also located in Vista.

Vista is home to a Japanese-American Cultural Center and Buddhist Temple (one of only two in California), a mosque, and over 75 other churches and temples of various denominations.

The automobile is the primary means of transportation within the city of Vista, however bus service is provided by the North County Transit District (NCTD) BREEZE. NCTD has an east-west light-weight commuter train called the Sprinter with a stop in downtown Vista and another further east on Civic Center Drive near Highway 78.

The North County Transit District operates a bus system and a light rail system, SPRINTER, with stations at Vista Transit Center and Civic Center Drive within city limits and also the Buena Creek Road station in eastern Vista sphere of influence. The SPRINTER provides service, west to Oceanside and east to San Marcos and Escondido. [31] From the Sprinter station in Oceanside, commuters can connect to AMTRAK trains, or to the Coaster commuter trains to downtown San Diego, or to the Metrolink commuter trains to the Los Angeles area.

The city of Vista is located within the Tri City Hospital District, which provides emergency care and hospitalization, while ambulance service is provided by the Vista Fire Department. [33] The Vista Community Clinic provides general health care to those who face economic, social or cultural barriers. [34] 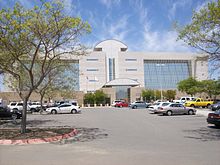