Kōtō is located east of the Tokyo metropolitan center, bounded by the Sumida River to the west and the Arakawa River to the east. Its major districts include Kameido, Kiba, Kiyosumi, Monzen-nakachō, Shirakawa, and Toyosu. The waterfront area of Ariake is in Kōtō, as is part of Odaiba.

Kōtō occupies a position on the waterfront of Tokyo Bay sandwiched between the wards of Chūō and Edogawa. Its inland boundary is with Sumida. Much of the land is reclaimed, The northern part is old reclaimed land, and the elevation is very low（below sea level. The southern part is relatively new, but there are few old temples or shrines.

Noteworthy places in Kōtō include:

The western part of the ward was formerly part of Fukagawa Ward of Tokyo City. It suffered severe damage in the 1923 Great Kantō earthquake, and was heavily bombed during World War II. The special ward was founded on March 15, 1947, by the merger of the wards of Fukagawa and Jōtō. 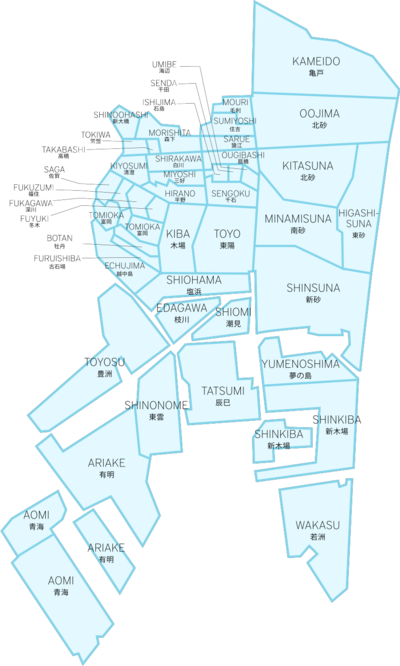 Map of Kōtō and its districts

Sony operates the Ariake Business Center in Kōtō. [8] The broadcasting center of WOWOW is in Koto. [9] [10]

Seta Corporation was headquartered in Kōtō. [11]

The main city office for Kōtō City is located in Toyo. There are branch offices located in Shirakawa, Tomioka, Toyosu, Komatsubashi, Kameido, Ojima, Sunamachi and Minamisuna. [12]