The Center hosts performances by the Orchestra and by visiting musicians. Many concerts are streamed live on the Center's YouTube channel. The Center also presents educational programs in its home buildings, online, and in schools throughout the country. 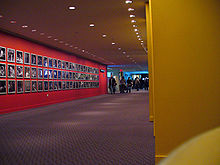 In 1987, trumpeter Wynton Marsalis was involved in starting the Classical Jazz concert series, the first series of jazz concerts at Lincoln Center. [2]

Marsalis leads the Jazz at Lincoln Center Orchestra, which performs in the Appel Room and the Rose Theater in addition to extensive international tours. Concerts are also broadcast live online. Educational programs are broadcast on the Center's YouTube channel. Since 2015, the Orchestra's albums have been issued on its own label, Blue Engine Records. [2] 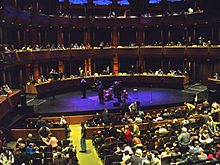 The Nesuhi Ertegun Jazz Hall of Fame is named for Nesuhi Ertegun, co-founder of Atlantic Records. A 60-person international voting panel, which includes musicians, scholars and educators from 17 countries, is charged to nominate and select "the most definitive artists in the history of jazz for induction into the Hall of Fame". [7]