From Wikipedia, the free encyclopedia
(Redirected from Virginia Department of Game and Inland Fisheries) 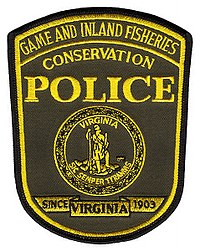 Since the establishment of the department, nine officers have died while on duty. In the 1920s and 1930s, five game wardens died from gunfire. Two additional officers were fatally shot in 1952 and 1960. On December 19, 1972, two game wardens died in an aircraft accident. [4]