Tug Hill, sometimes referred to as the Tug Hill Plateau, [4] is an upland region in Central New York, in the United States, famous for heavy winter snows. [5] [6] The Tug Hill region is east of Lake Ontario, north of Oneida Lake, and west of the Adirondack Mountains. The region is separated from the Adirondacks by the Black River Valley.

Although the region has traditionally been known as the Tug Hill plateau because its top is flat, it is not a plateau, but rather a cuesta, since it is composed of sedimentary rocks that tip up on one side, [2] rising from about 350 feet (110 m) on the west to over 2,000 feet (610 m) in the east.

The Tug Hill region comprises an expansive ring of rural and agricultural outlying areas surrounding a sparsely populated "core" region. The majority of the region's population is concentrated in villages that are situated primarily at the region's outer edge. [2]

The greater Tug Hill region is defined in New York State law [3] as encompassing the following 41 towns in four counties, with a total area of approximately 2,100 square miles (5,400 km2): [2]

Within the greater Tug Hill area lies the "core" Tug Hill region, defined not by municipal boundaries but rather by its continuous forests, minimal roads and sparse population. The stated size of the Tug Hill's core varies by source, but generally ranges from 235 square miles (610 km2) [6] [7] to 800 square miles (2,100 km2). [2]

Prior to European colonization, what was to become known as the Tug Hill region was controlled by the Iroquois Confederacy, specifically the Onondaga and Oneida nations. [8] Tug Hill lands were used by the Iroquois as seasonal hunting and fishing grounds; permanent settlements were located primarily to the south and west of the region. [9] These and other lands were seized from the Iroquois following the American Revolution. [7]

Four million acres (16,187 km2) in and around the Tug Hill region were initially purchased by colonial land speculator William Constable, who in turn subdivided the land to sell to New Englanders and newly arrived European immigrants. He also set aside 10,500 acres (42 km2) for regional improvements, such as roads and canals. [7]

Inexpensive land, abundant timber resources, and available farmland drove increased settlement in the region from 1820 to 1880. Expanding railroads and the completion of the Black River Canal in 1851 allowed for increased exports of food and timber products out of the region, often destined for New York City. Dairy farming and timber-based industries flourished in the region throughout the late 1800s, and around 1870, the region's population peaked at 80,000. [7]

However, the Tug Hill's rugged terrain, poor soils, and difficult winters eventually caused many of the region's inhabitants to abandon their farms and settlements. [7] By 1930, most of the region's agriculture and industry was concentrated in the more fertile valleys of the region's northwestern perimeter. Intentional and natural reforestation soon obscured almost all evidence of the core's relatively brief agricultural era. [9]

The core Tug Hill region encompasses 150,000 acres (610 km2) of unbroken, generally second-growth, northern hardwood forest, [7] and is drained by a vast network of streams. Important rivers and streams whose headwaters are located within the Tug Hill region include the Mohawk River, Deer River, Salmon River, Mad River, Sandy Creek, and the east and west branches of Fish Creek. [10] Despite the presence of numerous streams, many of the soils in the regions' core are poorly drained. Almost all the soils have some combination of factors which render them unsuitable for agriculture, including shallow depth, stoniness, rough topography, poor or excessive drainage, strong acidity and/or low fertility. Agricultural activity is largely absent from the Tug Hill's core, and is concentrated mainly in the outlying northern and western portions of the region, where soils are better drained and more fertile. [11]

According to the A. W. Kuchler U.S. potential natural vegetation types, the Tug Hill Plateau would have a dominant vegetation type of Northern Hardwoods (106) with a dominant vegetation form of Northern Hardwoods (23). [12] The plant hardiness zone at the Tug Hill Wildlife Management Area is 4a with an average annual extreme minimum air temperature of −29.5 °F (−34.2 °C). [13] The spring bloom typically peaks around May 13th and fall color usually peaks around September 30th.

Although much of the area is controlled by New York State, small, privately owned parcels exist, and most permanent residences are located near state highways or maintained county roads. While hunting camps in the back country areas of the Tug Hill region that are maintained during the hunting season often do not possess electricity or indoor plumbing, the majority of permanent residences in the area feature these amenities. Few roads or villages exist in these more remote areas, and undeveloped reaches of the region are a haven for wildlife, including deer, rabbits, beavers, turkeys, fishers, bobcats, coyote, and the occasional black bear. Salmon, trout, bass, walleye, and waterfowl can be found in the Tug Hill's abundant waterways. 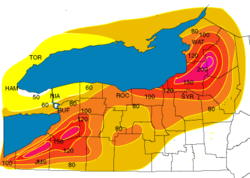 Average seasonal snowfall totals for areas impacted by lake-effect snow in New York (in inches). [15] The Tug Hill region, in the northeastern section of the map, receives the greatest average snowfall totals within New York State.

The Tug Hill region is renowned for its bountiful snowfall. The region's topography and location in relation to Lake Ontario often creates ideal conditions for lake-effect snow; snowfall totals for the Tug Hill region average more than 200 inches (16.7 ft; 5.1 m) per winter. [5] Tug Hill snowfalls have been described as being among "the most intense storms in the world" in terms of the amount of snow falling during a short period of time. [16] Snow depths commonly reach five feet (1.5 m) or more, and deeper amounts are routine.

One architectural feature related to the heavy snowfall can be found locally in some hunting camps: Supplemental, second-floor entry doors. These are located directly above the ground-level front door, and such apertures are used when so much snow has accumulated that the ground-level door cannot be accessed.[ citation needed]