From Wikipedia, the free encyclopedia
County in New York

The name Onondaga derives from the name of the Native American tribe who lived in this area at the time of European contact, one of the original Five Nations of the Haudenosaunee. They called themselves ( autonym) Onoda'gega, sometimes spelled Onontakeka. The word means "People of the Hills." Sometimes the term was Onondagaono ("The People of the Hills"). The federally recognized Onondaga Nation has a 9.3 square miles (24 km2) reservation within the county, on which they have self-government.

When counties were established in New York in 1683, the present Onondaga County was part of Albany County. This enormous county included the northern part of New York State as well as all of the present State of Vermont and, in theory, extended westward to the Pacific Ocean. It was reduced in size on July 3, 1766, by the creation of Cumberland County, and further on March 16, 1770, by the creation of Gloucester County, both containing territory now in Vermont.

On March 12, 1772, what was left of Albany County was split into three parts, one remaining under the name Albany County. One of the other pieces, Tryon County, contained the western portion (and thus, since no western boundary was specified, theoretically still extended west to the Pacific). The eastern boundary of Tryon County was approximately 5 miles (8 km) west of the present city of Schenectady, and the county included the western part of the Adirondack Mountains and the area west of the West Branch of the Delaware River. The area then designated as Tryon County now includes 37 counties of New York State. The county was named for William Tryon, colonial governor of New York.

In the years prior to 1776, most of the Loyalists in Tryon County fled to Canada. The Onondaga were among four Iroquois tribes that allied with the British against the American colonists, as they hoped to end their encroachment. Instead, they were forced to cede most of their land in New York to the United States after the war. Many Onondaga went with Joseph Brant and other nations to Canada, where they received land grants in compensation and formed the Six Nations of the Grand River First Nation.

In 1784, after a peace treaty ended the American Revolutionary War, the name of Tryon County was changed to Montgomery County. It honored General Richard Montgomery, who had captured several places in Canada and died attempting to capture the city of Quebec, and replaced the name of the hated British governor.

In 1791, Herkimer County was one of three counties split off from Montgomery (the other two being Otsego, and Tioga County). This was much larger than the present county, however, and was reduced by a number of subsequent splits.

In 1794, Onondaga County was split off from Herkimer County. This county was larger than the current Onondaga County, including the present Cayuga, Cortland, and part of Oswego Counties.

In 1799, Cayuga County was split off from Onondaga.

In 1808, Cortland County was split off from Onondaga.

In 1816, parts of Oneida and Onondaga Counties were taken to form the new Oswego County.

Central New York developed rapidly after the New Military Tract provided land in lieu of payment to Revolutionary War veterans. Migration was largely from the east, mostly from New England states. The Genesee Road, which became the Seneca Turnpike in 1800, provided access. Generally settlers preferred higher land, since they associated lowlands with disease. Over time, as early clearing and farming eroded hillside soil, valley lands were more fertile and highly prized for agriculture as well as for water power, which was the origin of many communities. An early settler of 1823 was James Hutchinson Woodworth, a native of Washington County, NY. He helped clear land for his family's farm in this region before he moved to Chicago where he became Mayor. The completion of the Erie Canal across New York state in 1825 accelerated trade, development and migration.

The city of Syracuse, New York developed relatively late, due to its marshy situation. It was incorporated as a village in 1825 and as a city in 1847; by contrast, the Village of Manlius, along the Cherry Valley and Seneca Turnpikes, was incorporated in 1813. The population of these rural towns was greatest in the late nineteenth century, when more people cultivated land and farms were relatively small, supporting large households.

Since that time, agriculture has declined in the county. Some Onondaga County towns like Spafford, New York were largely depopulated and many villages became veritable ghost towns. Onondaga County highlands now are more heavily reforested, with public parks and preserves providing recreation. Two Finger Lakes in the county, Skaneateles and Otisco, also attract visitors. The village of Skaneateles on scenic Route 20 has become a major tourist destination.

At the turn of the twenty-first century, population declined in the City of Syracuse while suburban communities generally grew, particularly with tract developments north of the city. Elsewhere, scattered commuter houses appeared, generally on fairly large parcels. The rapid development of the village of Skaneateles and shores of Skaneateles Lake led to increased demand for property and property values. 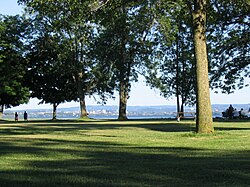 According to the U.S. Census Bureau, the county has an area of 806 square miles (2,090 km2), of which 778 square miles (2,020 km2) is land and 27 square miles (70 km2) (3.4%) is water. [5] The geographic dimensions of the county are illustrated as approximately 35 miles (56 km) in length and 30 miles (48 km) in width, and comprising 25 miles (40 km) of the New York State Barge Canal System, in combination with a number of lakes, streams and rivers. [6] Onondaga County is in the central portion of New York State, west of Albany and Utica, east of Rochester and northeast of Ithaca. Onondaga Lake is bordered by many of the larger communities in the county.

The northern part of the county is fairly level lake plain, extending northward to Lake Ontario. Oneida Lake three rivers, as well as the Erie and subsequent Barge Canals are in the lake plain. The main line of the New York Central Railroad and the New York State Thruway extend east and west across the county through the lake plain. The southern part of the county is Appalachian Plateau, with high hills rising at the southern edge of Syracuse. This is the eastern part of the Finger Lakes region. Skaneateles Lake and Otisco Lake are both in Onondaga County. US 20 extends east and west across the county, traversing dramatic hill-and-valley terrain. Between the lake plain and Appalachian highlands is a zone noted for drumlins, smaller, scattered hills formed as mounds of debris left by the last glacier. Tully is geologically noted for the terminal moraine deposited there by the glacier, filling the deep Tully Valley, which might have been another Finger Lake had the moraine been left closer to Syracuse, impounding water. Tully is at the divide between two major watersheds, one flowing northward to the Atlantic Ocean by way of the St. Lawrence River and the other southward to the ocean via the Susquehanna River. [7] Oneida Lake, the Finger Lakes, and smaller bodies of water provide recreation. The Appalachian hills have several ski areas, waterfalls and historic villages as well as large parks and forest preserves. 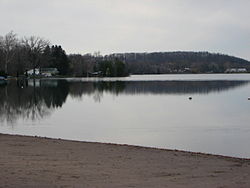 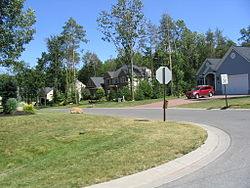 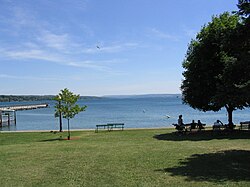 Skaneateles Lake is one of the Finger Lakes in Onondaga County.

Demographic trends (2006): The county population has decreased from a high in 1970. The increasing number of housing units apparently is due to smaller family units and more individuals living alone. While the City of Syracuse population has declined, some suburban towns have grown.

Onondaga County was governed exclusively by a board of supervisors until 1961, when voters approved the creation of the county executive. [15] In 1968, the board reorganized into a 24-seat county legislature. [16] In 2001, the legislature was reduced to 19 seats. The county executive is elected in a countywide vote. In a 2010 referendum, voters approved a measure to reduce the legislature to 17 seats. All 17 members are elected from individual districts. Currently, there are 11 Republicans and 6 Democrats. 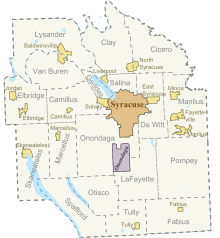 A map of towns, cities, and villages in Onondaga County, NY

Syracuse, the county seat, is the only city in Onondaga County. The following is a list of official towns, villages, and hamlets: [18]