U-151 was originally one of seven Deutschland class U-boats designed to carry cargo between the United States and Germany in 1916. Five of the submarine freighters were converted into long-range cruiser U-boats (U-kreuzers) equipped with two 15 cm (5.9 in) SK L/45 deck guns, including U-151 which was originally to have been named Oldenburg. The Type U 151 class were the largest U-boats of World War I. 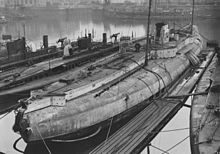 U-151 left Kiel on 14 April 1918 commanded by Korvettenkapitän Heinrich von Nostitz und Jänckendorff, her mission to attack American shipping. She arrived off the United States East Coast on 21 May, laid mines off the Delaware Capes and cut the submerged telegraph cables which connected New York City with Nova Scotia. On 25 May she stopped three American schooners off Virginia, took their crews prisoner, and sank the three ships by gunfire.

On 2 June 1918, known to some historians as "Black Sunday", U-151 sank six American ships and damaged two others off the coast of New Jersey in the space of a few hours. The next day the tanker Herbert L. Pratt struck a mine previously laid by U-151 in the area but was later salvaged. [5] Thirteen people died in the seven sinkings, their deaths caused by a capsized lifeboat from SS Carolina. [6]

On 9 June 1918, U-151 stopped the Norwegian cargo ship Vindeggan off Cape Hatteras, North Carolina. Scuttling charges were rigged aboard her, then she was escorted outside the shipping lane under a prize crew. Von Nostitz then transferred 70 tons of copper ingots from Vindeggan to U-151. [7]

On 14 June, U-151 sank the Norwegian barque Samoa, en route from Walvis Bay, South-West Africa, to Perth Amboy, New Jersey, with a cargo of copper ore, by gunfire 90 miles off the Virginia coast. There were no casualties. [8]

On the 18 June, U-151 sank the steamship SS Dwinsk, and then loitered near Dwinsk′s lifeboats in the hopes that more Allied shipping would be attracted to them. [9] Through this ruse, she launched torpedoes at the U.S. Navy auxiliary cruiser and troopship USS Von Steuben (ID-3017), but missed and was instead depth charged by Von Steuben.

On 28 June 1918, U-151 captured the SS Dictator and made its crew prisoners of war. Among those taken were four men from Newfoundland: Thomas Fiander, Edgar Banfield, Charles Blagdon, and Thomas Bowdridge.