The airport was built in 1929 by Boeing Transport Inc. and named Hubbard Field after Boeing Air Transport VP and air transport pioneer Eddie Hubbard. [4] It was acquired by United Airlines in 1936 and purchased by the City of Reno in 1953. The August 1953 OAG shows 15 scheduled departures each weekday; ten years later there were 28.

The first terminal building was completed in time for the 1960 Winter Olympics held in Squaw Valley, California in 1960. The present ticketing lobby and concourses were built in 1979. [5] The airport received its current name in 1994 (which honors both the city and the nearby popular tourist destination Lake Tahoe), when the terminal was named in honor of retired Air Force Reserve Major General and former U.S. Senator Howard Cannon. [6] Prior to that the airport itself was named Cannon International Airport.

Reno–Tahoe International was the hub of Reno Air, a now-defunct airline that had MD-80s and MD-90s to many cities until it was bought by American Airlines and later disposed of, in 2001. Reno Air's first flight was on July 1, 1992, and its last flight was August 30, 1999. On New Year's Eve of 2003, Continental Airlines completed the installation of self check-in in the continental United States at Reno International. [7]

The terminal was remodeled in 1996, 2009 and 2013. In 1996, the baggage claim and ticketing area were updated with technology and decor similar to Las Vegas. In 2008, the Airport began a $70 million project that enhanced the baggage screening equipment and remodeled the ticketing area with a modern Tahoe theme; the project was entirely completed in 2010. To complete the renovations, the TSA ordered the shutdown of the ticketing area, so the airport built a full service heated/a/c temporary ticketing tent, which took up 3 lanes out of 6 in front of the airport for taxi, pick up and drop off. In March 2013, a $24 million expansion of the airport was completed and focused on a new centralized TSA Security Checkpoint on the Ground Level, and above it, a shopping/dining promenade called "High Mountain Marketplace" which consists of CNBC News, InMotion Entertainment, Brighton and No Boundaries Outdoor Apparel. Dining options include McDonald's, Timber Ridge Restaurant, among others in the two concourses. There are giant windows in the dining areas that allow expansive views of the mountains and runways. Leading major airport designers designed the new spaces. With the new security checkpoint, travelers can now access both concourses without having to go through security. Future projects may include updates to the concourses.

The airport celebrated 75 years of service in November 2003.

On February 2014, the airport announced that Volaris planned to start operating non-stop service flights to Guadalajara, Mexico sometime in 2015. Since the DOT approved the route, it is Reno's first international non-stop service since 1999. On October 7, 2014, the DOT and the airport announced that Volaris would start a twice weekly flight to Guadalajara, Mexico from Reno on December 16, 2014. [8]

In November 2014, Thomas Cook Airlines announced that it planned to introduce twice weekly, non-stop flights from London–Gatwick to Reno starting in December 2015. It would have been the first transatlantic route from Reno Airport. [9] However, Thomas Cook Airlines canceled these plans in May 2015 stating insufficient border control capacities at the airport to handle their Airbus A330. [10] [11] 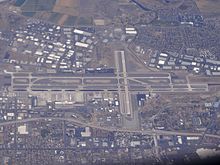 The passenger terminal is named after the late US Senator Howard Cannon. [13] The lobby of the terminal has an exhibit with the bust of Nevada State Senator (and Nevada State Senate Minority Leader) William J. "Bill" Raggio. Raggio is described in the exhibit as being "The Father of the Airport Authority."

The base is home to the 152d Airlift Wing (152 AW), a Nevada Air National Guard unit operationally gained by the Air Mobility Command (AMC) and equipped with C-130H Hercules aircraft. 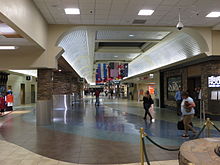 Airlines serving Reno have around 140 flights daily to and from the airport, providing service to 22 cities non-stop and about 31 cities with a same plane one-stop flight. Each terminal used to have its own security area on the concourse level, but were replaced in March 2013 with a combined security area on the first floor for both terminals.

A Southwest Airlines Boeing 737-700 being pushed back 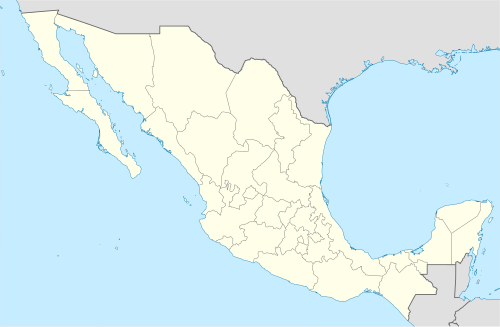 The passenger waiting area for taxis and limousines is located outside of the D Doors located North of Baggage Claim.

Public transportation to/from the airport is available via RTC Ride:

Complimentary Hotel Shuttles stop along the curb, outside the D Doors located North of Baggage Claim, to pick up passengers.

Sound levels have been analyzed for over two decades at this airport, with one of the first studies being a comprehensive production of aircraft sound level contour maps. [20] Later analysis was conducted to analyze sound levels at Kate Smith School and provide retrofitting to reduce sound levels through a Federal Aviation Administration grant. [21]