From Wikipedia, the free encyclopedia
This article is about the United States restaurant chain. For other uses, see Red lobster (disambiguation).

Red Lobster Hospitality LLC is an American casual dining restaurant chain headquartered in Orlando, Florida. The company has operations across most of the United States, as well as in China, Ecuador, Guam, Hong Kong, Japan, Malaysia, Mexico, Philippines, Puerto Rico, Qatar, and the United Arab Emirates; as of June 23, 2020, the company had 719 locations worldwide. [6] [7] Golden Gate Capital has been Red Lobster's parent company since it was acquired from Darden Restaurants on July 28, 2014. [8]

The first Red Lobster restaurant was opened on January 18, 1968, in Lakeland, Florida, by entrepreneurs Bill Darden and Charley Woodsby. [11] [12] The oft-quoted date of March 1968 is based on the March 27, 1968 incorporation of Red Lobster Inns of America, Inc. (now GMRI, Inc.) in the Florida Secretary of State's Office. [13]

Originally billed as a "Harbor for Seafood Lovers", the first restaurant was followed by four others throughout the southeastern United States. In 1970, General Mills acquired Red Lobster as a five-unit company. With new backing, the chain expanded rapidly in the 1980s.

Red Lobster entered Canada in the 1980s, in many cases by buying Ponderosa restaurant locations. Currently, Red Lobster generally maintains between 25 and 30 locations in Canada, the bulk in larger urban centres in Ontario (across southern Ontario plus one in Sudbury, in northern Ontario) with a smaller number in larger urban centres in all three Prairie provinces. It exited the Quebec market in September 1997, due to financial losses, and never attempted to enter British Columbia. [14]

In 1995, Red Lobster (along with Olive Garden and other sister chains), became part of Darden Restaurants, Inc. During that time, General Mills decided to release Darden into an independent, publicly traded corporation. [5] 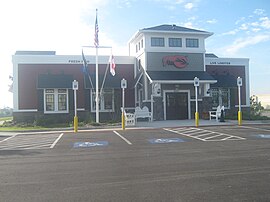 The "Bar Harbor" prototype design as seen at the Baton Rouge, Louisiana location

On December 19, 2013, Darden Restaurants announced plans to sell or spin off the Red Lobster brand, citing pressure from stock investors. [18] This was in direct response to Darden's going over budget on a new digital platform. [19] 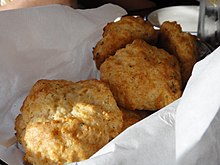 A basket of Cheddar Bay Biscuits from Red Lobster

Red Lobster has offered an endless snow crab leg promotion twice in its history (as of September 2003). However, in 2003, the promotion resulted in its parent company, Darden Restaurants', taking a $3 million charge to third-quarter earnings, resulting in president Edna Morris' departure from the company.

The ill-timed promotion was launched amid high wholesale crab leg prices. The chain also underestimated how many times a customer would order more. Further complicating matters at the restaurant level was the amount of time customers spent table-side in the restaurant cracking crab legs. This resulted in increased wait times in the lobby and overall diminished customer capacity per hour. [23]

In February 2016, American singer Beyoncé referenced Red Lobster in her single " Formation". After unexpectedly releasing the single and performing it during the Super Bowl 50 halftime show, Red Lobster reported a 33% sales increase due to the reference. [24]

In February 2016, Red Lobster was exposed for using less expensive langostino, along with Maine lobster, in their lobster bisque recipe. [26]