A LongHorn Steakhouse in Westland, Michigan.

LongHorn Steakhouse is an American casual dining restaurant chain that is owned and operated by Darden Restaurants, Inc., headquartered in Orlando, Florida. [2] As of 2016, LongHorn Steakhouse generated $1.6 billion in sales in its 481 locations. [4]

LongHorn Steakhouse was founded in 1981 by George McKerrow, Jr. and his best friend Brian. McKerrow was a former manager at Quinn's Mill Restaurant, a subsidiary of Victoria Station, a San Francisco-based concept with railroad cars used as dining areas that was popular in the US during the 70's and 80's.

The first location, originally called LongHorn Steaks Restaurant & Saloon, opened on Peachtree Street in Atlanta, Georgia. It was a former antique store, then an adult entertainment business. The walls were still painted black and some of the booths were divided by recycled black partitions. He filled it with steer heads and western paraphernalia. The LongHorn featured steaks grilled in a butter sauce. 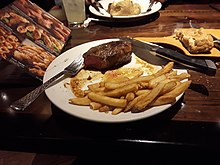 It was across from a very popular restaurant, Harrison's on Peachtree. Harrison's was the favorite hangout of Atlanta Journal and Constitution columnist Ron Hudspeth and Lewis Grizzard. Hudspeth regularly featured quotes from "Pete the barkeep" at Harrison's. Harrison's had a very limited bar menu. So, regulars ventured over to the Longhorn for a steak after a night of drinking.[ citation needed]

However, in January 1982, a sudden snow storm that became known as SnowJam 82, trapped the area's commuter population within the city limits and McKerrow offered $1 drinks and menu specials to the stranded motorists. Hudspeth featured it in his column. This helped turn the struggling restaurant around. [5]

By 1990, the franchise expanded further south. It primarily has locations throughout the Eastern United States. [2] It also has many locations in the Midwest, Southwest, and Puerto Rico.[ citation needed]

As of 2017, a new restaurant is being built in Riocentro El Dorado, the biggest shopping mall in Ecuador and one of the biggest in Latin America, located in the city of Guayaquil.

LongHorn Steakhouse has a Western/Texan theme. Each location is decorated with oil paintings, photos, and selected Western memorabilia that support this theme.[ citation needed]

A LongHorn Steakhouse in Savannah, Georgia

The restaurant is best known for serving various kinds of steak, including its "Flo's Filet". [7] In addition to steak, the menu also includes ribs, chicken, salmon, lobster, shrimp, and salads. Appetizers include their "Texas Tonion" and "Wild West Shrimp"; and side dishes are also served. The restaurant offers a full bar with draft and bottled beer, wine, and several signature margaritas.[ citation needed] A lunch menu that includes soups, salads, sandwiches, and hamburgers is available. [2]