Kiawah is a sea island, or barrier island, on the Atlantic coast of the United States. Located 25 miles (40 km) southwest of Charleston in Charleston County, South Carolina, it is primarily a private beach and golf resort. It is home to the Kiawah Island Golf Resort, with spacious villas, beaches, large and acclaimed golf courses, and other attractions. As of the 2010 census, Kiawah Island's population was 1,626, [5] up from 1,163 at the 2000 census. The island is part of the Charleston-North Charleston-Summerville metropolitan area. Alternative spellings and variants of the name itself include "Kiawa", "Kittiwar" (in DuBose Heyward's novel Porgy), and "Kittiwah" (in George Gershwin's opera Porgy and Bess). The proper pronunciation is sometimes considered difficult: the following reference provides an example pronunciation of Kiawah Island. [6]

The Bass Pond Site and Arnoldus Vander Horst House are listed on the National Register of Historic Places. [7]

Kiawah was named for the Kiawah Indians who were led by their head chieftain or cassique. In the year 1670, the cassique of the Kiawah led English colonists to settle at Charlestowne Landing. [8] [9]

In 1699, former pirate Captain George Raynor gained possession of Kiawah Island. On November 1, 1701, Captain Raynor sold half of the island to Captain William Davis, and left the other half in his will for his granddaughter. The half left to his will was passed through family members until John Stanyarne acquired the property. Stanyarne then purchased the remaining half of the island from the family of Captain Davis. [10]

The island was primarily used for cattle farming prior to the Civil War. Stanyarne built an estate that was valued highly, falling into a category of value that only 19% of the properties of South Carolina qualified for. [11] In his will he left the southwestern portion of the island to his granddaughter Mary Gibbs, and the northeastern portion to his granddaughter Elizabeth Vanderhorst. [12] Both portions were to be passed down until the third generation, when they would become considered fee simple ownerships. Gibbs died at a young age, and it is assumed that her father, Robert Gibbs, maintained her portion of the island. [12]

During the Revolutionary War the island has very few records of events, other than its use as a safe recovery space for American soldiers and their families. [13] The Vanderhorst property was burned down during the time of the Revolutionary War, but was rebuilt shortly after, and finished in the beginning of the 19th century. [10] The Vanderhorst family infrequently inhabited the island, and often stayed in their homes elsewhere along the Carolina coast. The Vanderhorst family still only claimed ownership of half of the island, with the other half being passed through the wills of the Gibbs family. A portion of the island controlled by the Gibbs family was sold to William Seabrook, and the other portion to Isaac Wilson. The island during this time only remained inhabited by slaves and the properties built by the families. [14]

The Civil War impacted Kiawah Island as it did the entire South. There were not damages recorded. The Vanderhorst family was not presently residing there, but they did check the state of the property in the earlier years of the war. [10] There are not records of what occurred on Kiawah during the war in terms of battles, but it was sieged by the North with Charleston and taken over by Northern troops. They remained stationed there as a precautionary measure. The properties seemed to have obtained damage, but it is unclear how or how extensive. [10]

The Vanderhorst family did not have many records from this time period. It seems that at the end of the war they were in financial trouble, and were unsure about how to maintain ownership of Kiawah. They were able to keep their portion of the island, while the other two portions changed ownership. The Vanderhorsts hired freed slaves for labor, and were able to produce cotton on the island. [14] By 1870, Arnoldus Vanderhorst, the present caretaker and owner of the Vanderhorst portion of Kiawah, recorded that the island was restored and there was agricultural growth. [10]

Long held by the Vanderhorst family, Kiawah Island was purchased by C.C. Royal in 1950 for logging and timber; he went on to develop the first summer home neighborhood in 1954 along the beach and named the street Eugenia, after his wife.

In 1974 Royal's heirs sold the island to Kuwait Investment Corporation; soon after, a thorough environmental survey was conducted, and a master plan for Kiawah's development was produced with help from the Sea Pines Company. Two years later, in 1976, real estate sales commenced and the Cougar Point (formerly Marsh Point) golf course was opened.

The 1980s saw the opening of two of the seven golf courses associated with Kiawah-Turtle Point in 1981 and Osprey Point in 1988. lattet year also saw all resort assets and amenities, along with Kiawah's undeveloped lands, purchased by the development group Kiawah Resort Associates (KRA), owned by Charles P. Darby III and Patrick W. McKinney, et al. The Town of Kiawah was also established in the same year.

Following the impact of Hurricane Hugo in 1989, KRA sold resort assets to Landmark Land Co., which then sold the assets to William H. Goodwin in 1993. The 1990s saw the establishment of the Kiawah Island Club in 1993 and the addition of three more courses: the Ocean Course in 1991, the River Course in 1995, and Oak Point in 1997. The last of Kiawah's associated golf courses, Cassique, was opened in 2000. Freshfields Village, a town-center-type mix of shopping, dining, and services saw ground broken in 2004. That same year, The Sanctuary hotel opened on the island. [15] 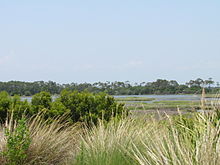 The marshes at Kiawah Island

There were 557 households, out of which 6.1% had children under the age of 18 living with them, 82.9% were married couples living together, 1.1% had a female householder with no husband present, and 14.9% were non-families. Of all households 13.1% were made up of individuals, and 7.4% had someone living alone who was 65 years of age or older. The average household size was 2.09 and the average family size was 2.25.

Kiawah Island is widely hailed as one of the premier golf destinations on the East Coast. [9] [18] The island features seven award-winning golf courses designed by the likes of Jack Nicklaus, Gary Player, Tom Fazio, and Pete Dye. The courses snake along the narrow island, moving from the dense wooded interior of the island to the breezy oceanfront. Five of the courses are owned and maintained by Kiawah Island Golf Resort. These include the Ocean Course, Turtle Point, Osprey Point, Oak Point, and Cougar Point. Two courses, the River Course and Cassique, are owned and maintained by Kiawah Island Club.

The Charleston County Park and Recreation Commission (CCPRC) [21] operates a park on the island, Beachwalker County Park, located on the west end of the island. In 2013, Forbes ranked the park's beach as the 10th best in the United States. [22]

Thirty miles of paved trails and 10 miles of beach provide a natural setting for biking and walking. [23]

Tidal creeks, salt marshes, and the Kiawah River itself provides the opportunity for various canoeing and kayaking expeditions. There are numerous water access points, including a community kayak rental dock at Mingo Point and boat storage near the 15th green of the Cassique golf course, as well as a full marina just outside Kiawah's gate, for more expansive Kiawah Island fishing and deep sea fishing excursions. Also, Kiawah Island Club Members enjoy private access to a kayak dock in Cassique, and the Kiawah Community Association maintains a launch and storage at Cinder Creek and Rhett's Bluff. [24]

The city is run by an elected mayor–council government system. The current mayor is Craig Weaver.

The Kiawah Island Community Association is a non-profit corporation established in 1976 that governs and manages the business and property that contribute to the overall ambiance and property values of Kiawah Island, South Carolina. The association maintains and insures the roads, ponds, facilities, parks and open areas built or conveyed by the developer, and offers social and recreational programs for property owners.

The following people own homes on Kiawah Island: