The NewYork-Presbyterian Hospital is a nonprofit [1] academic medical center in New York City affiliated with two Ivy League medical schools: Columbia University Vagelos College of Physicians and Surgeons and Weill Cornell Medicine. It is composed of two distinct medical centers, Columbia University Irving Medical Center and Weill Cornell Medical Center. As of 2020 [update], the hospital is ranked as the 4th best hospital in the United States and 1st in the New York City metropolitan area by U.S. News & World Report. [3] The hospital has around 20,000 employees and 2,678 beds in total, and is one of the largest hospitals in the world. [2] [4] [5]

The New York Hospital was founded in 1771 by Edinburgh graduate Samuel Bard. It received a Royal Charter granted by King George III of Great Britain and became associated with Weill Cornell Medical College upon the latter institution's founding in 1898. It is the third oldest hospital in the United States, after NYC Health + Hospitals/Bellevue in New York (1736) and Pennsylvania Hospital (1751).

A 1927 endowment of more than $20 million by Payne Whitney expanded the hospital significantly and the Payne Whitney Psychiatric Clinic is named in his honor. Other prominent donors have included Howard Hughes, William Randolph Hearst, Harry and Leona Helmsley, Maurice R. Greenberg, and the Baker, Whitney, Lasdon, and Payson families.

The Presbyterian Hospital was founded in 1868 by James Lenox, a New York philanthropist and Columbia University College of Physicians and Surgeons, also founded by Samuel Bard in 1767. In 1910, Columbia University and Presbyterian Hospital reached an agreement to affiliate, forming the world's first academic health center through the merger of existing institutions. [6] During the 1920s Edward S. Harkness and Anna Harkness, [7] purchased land and funded the construction of Columbia-Presbyterian Medical Center. In 1928 the two institutions fully moved to the new medical center. [8]

In 1925 the Sloane Hospital for Women, a leader in obstetrics and gynecology that had been founded in 1886, was incorporated. [9] Also in 1928, Sloan along with The Squier Urological Clinic and the Vanderbilt Clinic moved to Columbia Presbyterian Medical Center. [8]

New York Hospital was the subject of a lawsuit from the family of Libby Zion, a young woman admitted in 1984 who died while under the care of overworked hospital residents. An investigation by the New York State Health Commissioner, the Bell Commission, led to restrictions on the number of hours residents could work and required oversight of their care by accredited physicians (this regulation is also known as the Libby Zion law). These reforms have since been adopted nationwide. [10]

In the 2010s, the hospital began to supplement its physical presence with remote and online services. A telemedicine service allows patients to receive follow-up care remotely, a CAT-equipped ambulance (see below NYP-EMS) allows stroke care to take place outside the hospital, and a remote second opinion program uses Grand Rounds technology. [11]

During the initial phase COVID-19 pandemic, NYP was at the center of the United States response to the pandemic in New York City in the spring of 2020. The hospital was able to triple its ICU bed capacity and ventilator support. During the crisis, teams at NYP/Columbia pioneered techniques to assist two patients with one ventilator [12] and shared this around the country. NYP turned Baker Field and Columbia Soccer Stadium into a 288-bed field hospital in under two weeks. [13] [14]

On 13 October 2020 with a gift from Ray Dalio, NYP launched the Dalio Center for Health Justice, a research and advocacy organization, which will focus on reducing differences in access to quality health care that overwhelmingly affect communities of color. [16]

NYP is a 501(c)(3) nonprofit system that includes a variety of outlying hospitals that had been affiliates of the legacy Hospitals, NewYork or Presbyterian. These hospitals stretch throughout the five boroughs, Westchester County, Long Island and New Jersey.

The hospital, along with Weill Cornell Medicine and Columbia University Vagelos College of Physicians and Surgeons, runs the NewYork-Presbyterian Healthcare System, a network of independent, cooperating, acute-care and community hospitals, continuum-of-care facilities, home-health agencies, ambulatory sites, and specialty institutes in the New York metropolitan area. The two medical schools remain essentially autonomous, though there is increasing cooperation and coordination of clinical, research, and residency training programs. The hospitals have merged administrations, with Herb Pardes, MD, leading the combined hospitals from 2000 to 2011. Steven Corwin, MD is now the Hospital system CEO.

The institution's facilities are:

NewYork-Presbyterian Emergency Medical Services (NYP-EMS) is a hospital-based ambulance service [18] that has operated since 1981. NYP-EMS also operates critical care transport ambulances throughout the New York City Metropolitan Area. The service is licensed to operate in the 5 counties of New York City, Westchester, Putnam, and Dutchess counties in New York, and in the state of New Jersey for Basic Life Support and Specialty Care Transport.

NYP-EMS is also a New York State Department of Health-approved training center for EMT and Paramedic programs, several of which are approved for college-level credit by the New York State Department of Education. NYP-EMS operates one of the largest American Heart Association Emergency Cardiac Care training centers in New York. NYP-EMS also maintains a Special Operations team trained in hazardous materials decontamination and technical rescue. This team, accompanied by several Weill Cornell Physicians, provided rescue and relief support on the Gulf Coast of Mississippi in the aftermath of Hurricane Katrina in 2005. Most recently, the team decontaminated 28 patients after the 2007 New York City steam explosion in Midtown Manhattan on July 18, 2007.

In 2016 NYP purchased and fielded the first mobile stroke unit on the East Coast [19] and as of 2018 is only Hospital in the country to field three such units. [20] NYP-EMS operates 3 mobile stroke units based in Manhattan, Brooklyn and Queens.

The NewYork-Presbyterian Hospital / Columbia University Irving Medical Center is located on West 168th Street in the Washington Heights neighborhood of New York City. It contains an Emergency Room, an eye institute, a chapel, a garden, and more. It is situated on a 20-acre (81,000 m2) campus in the Washington Heights community of Manhattan and comprising roughly half of Columbia University's nearly $3 billion annual budget, it provides leadership in scientific research, medical education, and more. New York Presbyterian Hospital and Columbia University Irving Medical Center are well known for their strong affiliation with the Neurological Institute of New York, which houses the departments of Neurology [21] and Neurological Surgery [22] as well as numerous research laboratories.

Cornell Medical College was founded in 1898, and established an affiliation agreement with New York Hospital in 1913. [23] The Medical College is divided into 20 academic departments. It is among the top-ranked clinical and medical research centers in the United States of America, although the U.S. Department of Health & Human Services' Medicare program adjudged its rate of admission for heart failure patients to be worse than the national rate. Also housed here is the New York-Presbyterian Phyllis and David Komansky Center for Children's Health. Located at 525 East 68th Street on the Upper East Side in Manhattan (E.68th and York Avenue), New York City, the Komansky Center for Children's Health is a full-service pediatric "hospital within a hospital." The Komansky Center was listed on the 2009 U.S. News & World Report "America's Best Children's Hospitals" "Honor Roll" and one of only 10 children's hospitals in the nation to be ranked in all 10 clinical specialties. 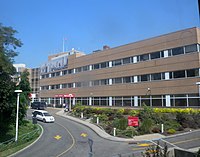 The Allen Hospital is located at 5141 Broadway and West 220th Street in northernmost part of Inwood, Manhattan. The General Surgery Group of The Allen Hospital specialize in the treatment of hernias and gallbladder diseases. The Hospitalist group and Internal Medicine and Family Medicine residents care for the adult medical patients. There is an active Labor and Delivery Department. It also has the Mila Conanan Memorial Chapel, named after Mila P. Conanan, who had been on the medical center staff for 20 years and the operating rooms director at the Allen Pavilion for three years before her death in 1990.

In 2020, Allen Hospital faced the COVID-19 pandemic along with the city. Among the casualties was the medical director of the emergency department, Dr Lorna Breen. After contracting the COVID-19 coronavirus whilst treating patients and returning to work after recuperation, the police department in Charlottesville, Virginia, released a statement that Dr Breen had died as a result of self-inflicted wounds shortly after they responded to an emergency call at her family home and she was taken to UVA hospital. Police Chief RaShall Brackney was quoted in an official statement: [25] [26] [27]

Frontline healthcare professionals and first responders are not immune to the mental or physical effects of the current pandemic. On a daily basis, these professionals operate under the most stressful of circumstances, and the Coronavirus has introduced additional stressors. Personal Protective Equipment (PPE) can reduce the likelihood of being infected, but what they cannot protect heroes like Dr. Lorna Breen, or our first responders against is the emotional and mental devastation caused by this disease. 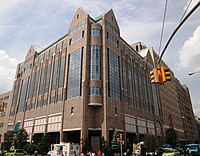 The front of Morgan Stanley Children's Hospital pictured in 2014.

Located on 3959 Broadway (165th Street and Broadway), New York City, NewYork-Presbyterian Morgan Stanley Children's Hospital is a pediatric hospital in New York–Presbyterian Hospital. They are especially known for their expertise in pediatric heart surgery. It was listed on the 2009 U.S. News & World Report "America's Best Children's Hospitals" "Honor Roll" and one of only 10 children's hospitals in the nation to be ranked in all 10 clinical specialties. The hospital houses the only pediatric Level 1 Trauma Center in Manhattan.

On July 1, 2013, NYP announced its merger with the former New York Downtown Hospital to form the Lower Manhattan Hospital (LMH) campus of the NewYork-Presbyterian Hospital. [30] LMH is one of the few hospitals in Lower Manhattan south of Greenwich Village. The campus operates 170 beds and offers a full range of inpatient and outpatient services. LMH serves the diverse neighborhoods of Wall Street, Battery Park City, Chinatown, SoHo, TriBeCa, Little Italy, and the Lower East Side, and is the closest acute care facility to both the Financial District and to the seat of New York City's government.

Founded in 1889 by the Helping Hand Association, NewYork-Presbyterian/Hudson Valley Hospital, located in Cortlandt Manor, New York, serves residents of the Hudson Valley and Westchester County. The 128-bed facility provides a wide range of ambulatory care and inpatient services, with 350 physicians on staff in 43 specialties. The hospital is home to the region's only state-of-the-art, 24-hour "no wait" emergency department, which sees more than 39,000 visits per year. In 2011, the Cheryl R. Lindenbaum Cancer Center opened, offering the first comprehensive cancer center in the area, combining infusion, radiation therapy and support services all under one roof.

Ronald O. Perelman Heart Institute is a "medical town square" dedicated to the treatment of heart disease patients in New York City. Ronald O. Perelman, chairman of MacAndrews & Forbes Holdings Inc., made a $50 million gift to the NewYork-Presbyterian Hospital/ Weill Cornell Medical Center on February 28, 2009, to establish the institute. The Heart Institute has a welcome center, a clinical trials enrollment center, and an interactive education resource center that includes medical information on heart disease — with an added focus on cardiac disease in women. [32] [33]