From Wikipedia, the free encyclopedia
Hawaiian royalty and Hawaiian politician

Jonah Kūhiō Kalanianaʻole (March 26, 1871 – January 7, 1922) was a prince of the Kingdom of Hawaiʻi until it was overthrown by a coalition of American and European businessmen in 1893. He later went on to become a representative in the Territory of Hawaii as delegate to the United States Congress, and as such is the only person ever elected to that body who had been born into royalty. [2]

As prince of Hawaii

Kalanianaʻole was born March 26, 1871 in Kukui‘ula, Kōloa on the island of Kauaʻi. [3] [4] Like many aliʻi (Hawaiian nobility) his genealogy was complex, but he was an heir of Kaumualiʻi, the last ruling chief of Kauaʻi. He was named after his maternal grandfather Kūhiō Kalanianaʻole, a High Chief of Hilo, and his paternal grandfather Jonah Piʻikoi, a High Chief of Kauaʻi. His Hawaiian name Kuhio translated into "Chief who leaned forward as he stood," and "Kalanianaʻole" meant "ambitious Chief," or "Chief who is never satisfied." [5] Like many Hawaiian nobles in the nineteenth-century he attended the exclusive private Royal School and Oahu College in Honolulu on the island of Oʻahu. In the 1870s, a French school teacher at St. Alban's College, now ʻ Iolani School, commented on how young Jonah Kūhiō Kalanianaʻole's eyes twinkled merrily and how he kept a perpetual smile. "He is so cute, just like the pictures of the little cupid", teacher Pierre Jones said. The nickname, "Prince Cupid", stuck with Prince Kūhiō for the rest of his life. [6] After completing his basic education he also traveled abroad for further study. He studied for four years at Saint Matthew's School, a private Episcopal military school in San Mateo, California, [7] and at the Royal Agricultural College in England before graduating from a business school in England. He was described as being an excellent marksman and athlete at sports such as football and bicycling. [8]:57–59

Prince of the Kalākaua dynasty

After the rule of the House of Kamehameha ended with the death of King Kamehameha V in 1872, and King Lunalilo died in 1874, the House of Kalākaua ascended to the throne of the Kingdom of Hawaiʻi. He became an orphan after his father died in 1878 and mother in 1884. Kalanianaʻole was adopted by King David Kalākaua's wife, Queen Kapiʻolani, who was his maternal aunt. This practice was called hānai, a traditional form of adoption widely used in ancient Hawaii, which made Kalanianaʻole a Prince of the Kingdom, with the style of "Royal Highness". When Kalākaua came to power Kalanianaʻole was appointed to the royal Cabinet administering the Department of the Interior. After Kalākaua's death in 1891, Liliʻuokalani became queen, and she continued to favour Kalanianaʻole.

However, in 1893 the overthrow of the Kingdom of Hawaii put in power first a Provisional Government of Hawaii, and then a republic with no role for monarchs. Liliʻuokalani continued to hope she could be restored to the throne, while American businessmen lobbied for annexation.

At the age of twenty four, [9] he participated in the 1895 Wilcox rebellion against the Republic of Hawaiʻi. The rebels proved no match for the Republic troops and police, and shortly after hostilities began, all those involved in the rebellion were routed and captured. Kūhiō was sentenced to a year in prison while others were charged with treason and sentenced with execution. Death sentences were commuted to imprisonment. Kūhiō served his full term. Daily visits of his fiancée, Elizabeth Kahanu Kalanianaʻole encouraged him in his most dark times. They married October 8, 1896.

In 1898, the United States annexed Hawaii and the Territory of Hawaii was formed. Kūhiō and his wife left Hawaiʻi upon his release and traveled widely in Europe, where they were treated as visiting royalty. He traveled to Africa from 1899 to 1902 where he joined the British Army to fight in the Second Boer War. [10]

From prince to statesman 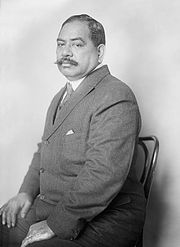 As a Congressional Delegate

Kūhiō eventually returned from his self-imposed exile to take part in politics [9] in post-annexation Hawaiʻi. He became active in the Home Rule Party of Hawaii, which represented native Hawaiians and continued to fight for Hawaiian independence.

On July 10, 1902, Prince Kūhiō split from the Home Rule Party, walking out of its convention along with nearly half of the delegates there. He formed the short-lived Hui Kuokoa Party. However, by September 1, 1902, Kuhio decided to join the Republican Party, was nominated as their candidate for Congress, and dramatically altered the political landscape. Kūhiō was elected delegate to the U.S. Congress as a Republican.

Kūhiō's letter circulated to Senators in 1920 is descriptive of his thinking. "After extensive investigation and survey on the part of various organizations organized for the purpose of rehabilitating the race, it was found that the only method in which to rehabilitate the race was to place them back upon the soil." [11]

He served from March 4, 1903 until his death, winning a total of ten elections. [10] During this time he instituted local government at the county level, creating the county system still used today in Hawaiʻi. He staffed the civil service positions that resulted with Hawaiian appointees. [12] This move combined the political patronage system of 19th century American politics with the traditional Hawaiian chiefly role of beneficently delegating authority to trusted retainers. [13]

In 1903, Kūhiō reorganized the Royal Order of Kamehameha I, which held the first observance of the Kamehameha Day holiday in 1904. [6] He was a founder of the first Hawaiian Civic Club on December 7, 1918. [14] He helped organize a centenary celebration of the death of Kamehameha I in 1919. [15] 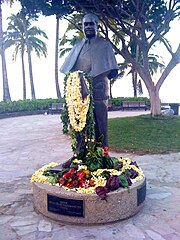 The Prince Kūhiō Statue at Waikīkī

In 1919, Kūhiō introduced in Congress the first-ever Hawaii Statehood Act. It would be another 40 years before seeing fruition.

During this period, the Hawaiian Homes Commission Act of 1921 was signed by President Warren G. Harding. Despite Kūhiō's wishes, the Act contained high blood-quantum requirements, and leased land instead of granting it fee-simple, creating a perpetual government institution. This act and the others that followed continue to be controversial in contemporary Hawaiian politics, and have been used to justify more recent legislation like the Akaka Bill. [16] He served on the first Hawaiian Homes Commission starting on September 16, 1921. [15]

Kūhiō died on January 7, 1922. His body was interred near his royal family at the Royal Mausoleum known as Mauna ʻAla in Nuʻuanu on the island of Oʻahu. [17]