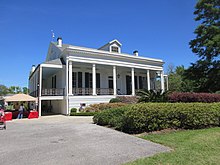 Early French colonial documents show what would become Jefferson as part of the "Tchoupitoulas Coast" of Native American settlement. In the French and Spanish colonial era it was divided into a series of plantations with boundary lines perpendicular to the Mississippi River.

In the American Civil War, Camp Parapet was built originally by Confederate forces to defend New Orleans from an attack from the upriver side. After the Union liberated the city sailing up from downriver, U.S. troops expanded the fortifications to defend from Confederate counterattacks which never came.

What is now Jefferson includes formerly separate small communities dating back to the 19th century, including, Hoeyville, New Carrollon, Southport, and Shrewsbury, along with 20th century subdivisions/land developments including Azalea Gardens, Camellia Gardens, Jefferson Heights, and Rio Vista. Some of these names continue to sometimes be used locally to refer to neighborhoods.

The current 4 lane Jefferson Highway was inaugurated in 1928, accelerating development as a suburban area within Greater New Orleans.

Former landmarks included what is best remembered as "The Beverly". An old plantation house was first converted to a "road house" music venue called "Suburban Gardens" in the 1920s; Louis Armstrong and his band had a summer residency here in 1931. In 1945 it was expanded into a lush (but illegal) gambling casino under the name the Beverly Country Club. After Federal crackdowns, it became a dinner theater until it burned down in 1983. [2]

The northern boundary is separated from Metairie by the triple barriers of a drainage canal, railroad tracks, and the Earhart Expressway. The only open public road crossings are Causeway Boulevard and Central Avenue. Many years ago, Labarre Road and Shrewsbury Road connected from River Road to Airline Dr. Many Residents in Old Jefferson prefer the route to continue to Airline Dr. Old Jefferson now is a tucked away neighborhood. It's largely expanding with new shops and businesses coming in.

St. Agnes School a K-7 Catholic school of the Roman Catholic Archdiocese of New Orleans, was previously in Jefferson. It was created in 1941, [12] and closed in 2015. [13] In 2014 it had 161 students, [13] and then in 2015 it had 125 students. Principal Michael Buras stated that the school community gained an acceptance that the school will close. [14] The school accepted school vouchers. [15] As of 2020 [update] Jefferson Chamber Foundation Academy (JCFA) maintains a charter school for non-traditional students in the building. [12]

Jefferson Parish Library operates the Rosedale Library in Jefferson. [7] [16] A Greek revival plantation house named "Rosedale," established in 1838, used to occupy the present day site of the library. In 1978 two fires destroyed the house, which was 140 years old. The library was established in 1986. [16]