From Wikipedia, the free encyclopedia
Parish in Louisiana

It has become widely accepted that the name Livingston is an eponym honoring Edward Livingston, a prominent American and Louisianan, a jurist and statesman who assisted in the drafting of the Louisiana Civil Code of 1825. [1]

During the 2016 Louisiana floods, Livingston Parish was one of the hardest hit areas; an official estimated that 75 percent of the homes in the parish were a "total loss." [5]

Scott M. Perrilloux is the district attorney for the 21st judicial district of Louisiana, comprising the parishes (counties) of Livingston, St. Helena, and Tangipahoa.

Together with the parishes of St. Helena and Tangipahoa, Livingston Parish forms Louisiana's 21st judicial district.

Hurricane Katrina had a dramatic effect on the population in Livingston Parish. Many displaced families of the affected Parishes have moved into the area and as a result, the population of the parish has increased significantly. On June 6, 2007, the Census Bureau published a report "Special Population Estimates for Impacted Counties in the Gulf Coast Area" which shows a population increase for Livingston Parish to 111,863 as of January 1, 2006. [10]

Livingston Parish is home of one of two installations for a gravitational wave observatory (LIGO) which is a facility dedicated to the detection of cosmic gravitational waves and the harnessing of these waves for scientific research. [11]

As of January 2015, Livingston Parish is Louisiana's fastest-growing parish. [12]

Livingston Parish is divided into nine council districts. The borders of each district are drawn so as to even out the population in each district.

At the end of 2014, the construction of a new Livingston Parish Courthouse was completed, with the ribbon-cutting scheduled for mid-February 2015. The new facility contains over 100,000 square feet; it replaces an antiquated complex dating back more than seventy years. [12]

In its early history, Livingston Parish was “ Solid South” Democratic, although it demonstrated Piney Woods voting behavior in 1928 when it was Herbert Hoover’s best parish in Louisiana. Like other parishes in the Baton Rouge metropolitan area, Livingston remained loyal to Harry S. Truman in 1948 and to Adlai Stevenson II in 1956 when Louisiana’s electoral votes went to Strom Thurmond and Dwight D. Eisenhower respectively. Barry Goldwater became the first Republican to win the parish in 1964, and in recent years, Livingston Parish has been one of the most Republican parishes in Louisiana, and one of the most Republican county-equivalents in the nation. It has gone Republican in every presidential election since 1984. In the 2004 election, George W. Bush received 33,976 votes, or 77% of the parish’s total, more than three times the 9,895 votes (22%) his opponent, John Kerry, received. [14] The Republicans fared better still in the 2008 election, in which John McCain received 43,269 votes (85% of the total) to just 6,681 votes (13%) for Democrat Barack Obama.

The Livingston Parish Public Schools operates all public schools in the parish. 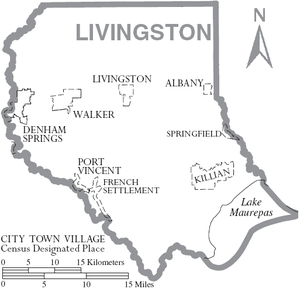 Outline of the Parish with municipal labels