From Wikipedia, the free encyclopedia
Parish in Louisiana

Madison Parish ( French: Paroisse de Madison) is a parish located on the northeastern border of the U.S. state of Louisiana, in the delta lowlands along the Mississippi River. As of the 2010 census, the population was 12,093. [1] Its parish seat is Tallulah. [2] The parish was formed in 1839. [3]

With a history of cotton plantations and pecan farms, the parish economy continues to be primarily agricultural. It has a majority African-American population. For years a ferry connected Delta, Louisiana (and traffic from the parish) to Vicksburg, Mississippi. A bridge now carries highway US 80 across the river.

Madison Parish was the home to many succeeding Native American groups in the thousands of years before European settlement. Peoples of the Marksville culture, Troyville culture, Coles Creek culture and Plaquemine culture built villages and earthwork mound complexes throughout the area. Notable examples include the Fitzhugh Mounds and the Raffman Site.

Historic tribes which were encountered by European colonists include the Taensa and Natchez peoples, who both spoke the Natchez language.

The parish is named for former U.S. President James Madison. [4] As was typical of northern areas of Louisiana, and especially along the Mississippi River, it was developed for cotton agriculture on large plantations worked by large gangs of enslaved African Americans.

In Madison's honor, the parish courthouse is built in the colonial Virginia style of architecture. It is located in the center of the downtown area and faces east. Nearby is the Tallulah City Hall, which faces south.

During the American Civil War, Madison Parish, then a rich cotton area, sent many of its young white men into battle early in the war. Major planters were exempted from service but they often paid for the equipping of companies. In 1862, the parish government paid a bonus of $80 to anyone joining one of its Confederate military companies. [5]

When Governor Thomas Overton Moore realized that New Orleans was going to fall to Union forces, he issued orders for the destruction of stored cotton in the state to keep it from Federal hands. Otherwise, the Union would sell the cotton, for which there was still high demand, and claim the revenue. The planters and brokers supervised slaves who burned hundreds of thousands of dollars worth of cotton in New Orleans and around the state. [6] Governor Moore asked Brig. Gen. R. B. Todd, who commanded the Eleventh Brigade in northeast Louisiana, to call his own militia into active service, and all men between eighteen and forty who were not subject to conscription. These men from Madison, Carroll, and Tensas parishes were to cooperate with Confederate authorities to help repel Federal attacks in the area. [7]

Toward the end of the war, Madison Parish faced problems with jayhawkers, men sympathetic to the Union. According to historian Winters, they "were holed up in the impenetrable cane and cypress swamps in the area. This band, made up of draft dodgers, deserters, and runaway Negroes, often left the swamps to rob, kill, or capture anyone who passed by on the road." [8] The Confederates dressed in Federal uniforms to trick the jayhawkers. Winters continues: "The leader of the desperadoes, a huge black, welcomed the supposed Federal troops. Suddenly the [Confederate] disguised men fell upon the surprised gang and began to slaughter them. [In] a quick but bloody struggle [the Confederates] killed 130 of the group. The few who escaped never again returned to ravage the area." [8]

Following the Reconstruction era and during the Jim Crow era, white Democrats across the state violently suppressed black voting, which was for Republican candidates, and civil rights. Twelve blacks were lynched in Madison Parish from 1877 to 1950, most near the turn of the 20th century when social and economic tensions were the highest. [9] In addition, in July 1899 five immigrant Sicilian grocers were lynched by whites in Tallulah, the parish seat, for failing to observe Jim Crow customs of serving whites before blacks and because they were competing with locals with their stores. [10]

The Sevier family, members of the Democratic Party, dominated Madison Parish politics for more than a century, during a period when most blacks (who were voting Republican) were disenfranchised after passage of the 1898 constitution. It raised barriers to voter registration. These planters claimed descent from John Sevier, a fighter in the American Revolution, governor of Tennessee, and namesake of Sevierville and Sevier County in eastern Tennessee. Among the political Seviers were Andrew Jackson Sevier, Jr., who served as sheriff of Madison Parish from 1904 until his death in 1941. He was briefly succeeded by his wife, Mary Louise Day Sevier. Louisiana State Senator Andrew L. Sevier served from 1932 until his death in 1962. State Representative Henry Clay "Happy" Sevier, Sr. served from 1936 to 1952. William Putnam "Buck" Sevier, Jr., was a banker and town alderman. He served as mayor of Tallulah from 1947 until his retirement in 1974. [11]

Civil rights legislation in 1965 enabled more African Americans to exercise their constitutional rights to register and vote in Madison Parish, and they began to elect candidates of their choice to local offices. In 1969 Zelma Wyche was elected as Police Chief of Tallulah. In 1974 Adell Williams was elected as mayor, the first woman and first African American to fill this position.

Because of limited job opportunities as agriculture has mechanized and the Chicago Lumber Mill closed, the parish population has declined overall by about one-third since its peak in 1980. Numerous African Americans left during the first half of the 20th century in the Great Migration to escape the violence and oppression of Jim Crow; they moved to the North and West.

With its majority- black population, Madison Parish in the 21st century has become a stronghold of support for the Democratic Party. Prior to the passage of the Voting Rights Act of 1965, when the state unconstitutionally prevented blacks from voting, the white Madison Parish voters in 1962 supported the Republican nominee Taylor W. O'Hearn for the US Senate; he lost to powerful Democratic incumbent Russell B. Long. O'Hearn polled 58.7 percent among whites in Madison Parish. [19] He later was elected to the Louisiana House of Representatives from Caddo Parish, also in the northern part of the state.

During the 1970s and 1980s, conservative white voters in Louisiana and other southern states began to shift to supporting Republican presidential candidates, creating a more competitive system than the Solid South. Since the civil rights era, most African Americans in the South have supported Democratic candidates, as the national party supported their drive to exercise constitutional rights as citizens, even though most Southern Democrats remained vehemently opposed to civil rights. In 1988, Governor Michael Dukakis of Massachusetts won in Madison Parish, with 2,416 votes (49.2 percent) compared to Republican Vice President George H.W. Bush, who finished in the presidential contest with 2,334 ballots (47.5 percent). [20] 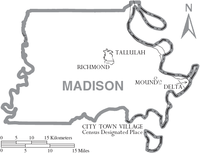