Henry Laurens Dawes (October 30, 1816 – February 5, 1903) was an attorney and politician, a Republican United States Senator and United States Representative from Massachusetts. He is notable for the Dawes Act (1887), which was intended to stimulate the assimilation of Native Americans by ending the tribal government and control of communal lands. Especially directed at the tribes in Indian Territory, it provided for the allotment of tribal lands to individual households of tribal members, and for their being granted United States citizenship. This also made them subject to state and federal taxes. In addition, extinguishing tribal land claims in this territory later enabled the admission of Oklahoma as a state in 1907.

He studied law with an established firm, and in 1842, was admitted to the bar. He began the practice of law in the village of North Adams, Massachusetts. For a time he edited The North Adams Transcript.

From 1853 to 1857, he served as appointed state district attorney for the western district of Massachusetts. He was elected to the United States House of Representatives in 1856, serving multiple terms until 1875. In 1868, he received 2,000 shares of stock in the Crédit Mobilier of America railroad construction company from Representative Oakes Ames, as part of the Union Pacific railway's influence-buying efforts.

In March 1871, Dawes supported federal financing for Ferdinand Vandeveer Hayden's fifth geological survey of the territories, which became a driving force in the creation of Yellowstone National Park. Dawes's son, Chester Dawes, was a member of the survey team. Annie, the first commercial boat on Yellowstone Lake, was purportedly named after his daughter, Anna Dawes. In late 1871 and early 1872, Dawes became an ardent supporter of a bill to create Yellowstone National Park in order to preserve its wilderness and resources. [1]

In 1875, he was chosen by the state legislature (as was the practice at the time) to succeed William B. Washburn as U.S. Senator from Massachusetts. He served multiple terms, until 1893. 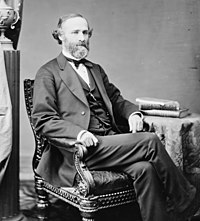 During his long period of legislative activity, Dawes served in the House on the committees on elections, ways and means, and appropriations. He took a prominent part in passage of the anti-slavery and Reconstruction measures during and after the Civil War, in tariff legislation, and in the establishment of a fish commission. He also initiated the production of daily weather reports to be provided by the federal government.

In the Senate, Dawes was chairman of the Committee on Indian Affairs. He concentrated on enactment of laws that he believed were for the benefit of the Indians. In the late 19th century, after the Indian Wars, there were widespread fears that the Indians were disappearing and that their tribes would cease to exist. In the West, Indians had been forced onto reservations and were struggling with poor lands and too little area, as well as encroachment by white settlers. In the East, most Indians were landless and were largely believed to have entered or been marginal to majority culture. Well-meaning people such as Dawes believed that the Indians had to assimilate to majority culture to survive, and should take up subsistence farming, still dominant in agriculture.

In 1869, Dawes became a founding member of the Monday Evening Club, a men's literary society in Pittsfield, Massachusetts. [2]

His most prominent achievement in Congress was the passage in 1887 of the General Allotment Act of 1887 ( Dawes Act), ch. 119, 24 Stat. 388, 25 U.S.C.  § 331 et seq., which authorized the President of the United States to survey Indian tribal lands, and divide the area into allotments for the individual Indian or household. It was intended to assimilate Indians by breaking up their tribal governments and communal lands, and by encouraging them to undertake subsistence farming, then widespread in American society. It was enacted February 8, 1887, and named for Dawes, its sponsor. The Act was amended in 1891, 1898 by the Curtis Act, and in 1906, by the Burke Act.

The Dawes Commission, set up under an Indian Office appropriation bill in 1893, was created not to administer the Act but to attempt to persuade the tribes excluded from the Act by treaties to agree to the allotment plan. After gaining agreement from representatives of the Five Civilized Tribes in Indian Territory, the commission appointed registrars to register members on rolls prior to allotment of lands. Many tribes have since based membership and citizen qualifications on descent from persons listed as Indians on the Dawes Rolls. (Also listed were freedmen of each tribe, and intermarried whites.) The Curtis Act of 1898 extended the provisions of the Dawes Act to the Five Civilized Tribes, abolishing tribal jurisdiction of their communal lands.[ citation needed]

On leaving the Senate in 1893, Dawes became chairman of the Commission to the Five Civilized Tribes, also known as the Dawes Commission, and served for ten years. He negotiated with the tribes for the extinction of the communal title to their land and for the dissolution of the tribal governments. The goal was to make tribal members a constituent part of the United States. In the process, Native American tribes lost about 90 million acres (360,000 km²) of treaty land, or about two thirds of their 1887 land base, over the life of the Dawes Act. About 90,000 Indians were made landless. The Act forced Native people onto small tracts of land, distant from their kin relations. The allotment policy depleted the land base and ended hunting as a means of subsistence, creating a crisis for many tribes.

The Coolidge administration studied the effects of the Dawes Act and the current conditions for Indians in what is known as the Meriam Report, completed in 1928. It found that the Dawes Act had been used illegally to deprive Native Americans of their land rights.

Aidan Quinn played Dawes in the film Bury My Heart at Wounded Knee, adapted from a 1970 history of Native Americans, the United States, and the West written by Dee Brown.