From Wikipedia, the free encyclopedia
English-based creole spoken in Hawai'i
Not to be confused with Pidgin Hawaiian.

Hawaiian Pidgin (alternately, Hawaiian Creole English or HCE, known locally as Pidgin) is an English-based creole language spoken in Hawaiʻi. It has 600,000 native speakers and 400,000 who speak it as a second language. [2] Although English and Hawaiian are the co- official languages of the state of Hawaiʻi, [3] Hawaiian Pidgin is spoken by many Hawaiʻi residents in everyday conversation and is often used in advertising targeted toward locals in Hawaiʻi. In the Hawaiian language, it is called ʻōlelo paʻi ʻai – "pounding-taro language". [4]

Despite its name, Hawaiian Pidgin is not a pidgin, but rather a full-fledged, nativized, and demographically stable creole language. [5] It did, however, evolve from various real pidgins spoken as common languages between ethnic groups in Hawaiʻi.

Although it is not completely mutually intelligible with Standard American English, Hawaiian Pidgin retains the highest degree of mutual intelligibility with it when compared with other English-based creoles, such as Jamaican Patois, in part due to its relatively recent emergence and the tendency for many of its speakers to mix Pidgin with Standard English.

Hawaiian Pidgin originated on sugarcane plantations as a form of communication used between Hawaiian speaking Native Hawaiian residents, English speaking residents, and foreign immigrants. [6] It supplanted, and was influenced by, the existing pidgin that Native Hawaiians already used on plantations and elsewhere in Hawaiʻi. Because such sugarcane plantations often hired workers from many different countries, a common language was needed in order for the plantation workers to communicate effectively with each other and their supervisors. [7] Hawaiian Pidgin has been influenced by many different languages, including Portuguese, Hawaiian, American English, and Cantonese. As people of other backgrounds were brought in to work on the plantations, Hawaiian Pidgin acquired even more words from languages such as Japanese, Ilocano, Okinawan and Korean. The article Japanese loanwords in Hawaii lists some of those words originally from Japanese. Hawaiian Pidgin has also been influenced to a lesser degree by Spanish spoken by Puerto Rican settlers in Hawaiʻi.

Hawaiian Pidgin was created mainly as a means of communication or to facilitate cooperation between the immigrants and the Americans to get business done. [8] Even today, Hawaiian Pidgin retains some influences from these languages. For example, the word "stay" in Hawaiian Pidgin has a form and use similar to the Hawaiian verb "noho", Portuguese verb "ficar" or Spanish "estar", which mean "to be" but are used only when referring to a temporary state or location.

In the 19th and 20th centuries, Hawaiian Pidgin started to be used outside the plantation between ethnic groups. In the 1980s two educational programs started that were led in Hawaiian Pidgin to help students learn Standard English. [9] Public school children learned Hawaiian Pidgin from their classmates and parents. Living in a community mixed with various cultures led to the daily usage of Hawaiian Pidgin, also causing the language to expand. It was easier for school children of different ethnic backgrounds to speak Hawaiian Pidgin than to learn another language. [10] Children growing up with this language expanded Hawaiian Pidgin as their first language, or mother tongue. [11] For this reason, linguists generally consider Hawaiian Pidgin to be a creole language. [12] A five-year survey that the U.S. Census Bureau conducted in Hawaiʻi and released in November 2015 revealed that many people spoke Pidgin as an additional language. Because of this, in 2015, the U.S. Census Bureau added Pidgin to its list of official languages in the state of Hawaiʻi. [13]

In the last few decades, many Hawaii residents have moved to the US mainland due to economic issues. [14] [15] As a result, thousands of Pidgin speakers can be found in the other 49 states. [16] 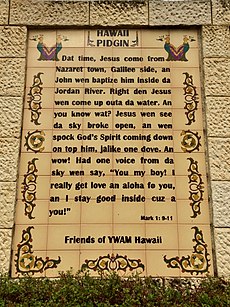 Hawaiian Pidgin has distinct grammatical forms not found in SAE, although some of them are shared with other dialectal forms of English or may derive from other linguistic influences.

Forms used for SAE "to be":

Note that these constructions also mimic the grammar of the Hawaiian language. In Hawaiian, "nani ka pēpē" is literally "beautiful the baby" retaining that specific syntactic form, and is perfectly correct Hawaiian grammar with equivalent meaning in English, "The baby is beautiful."

Da book stay on top da table.
The book is on the table.

For tense-marking of verb, auxiliary verbs are employed:

The language is highly stigmatized in formal settings, for which American English or the Hawaiian language are preferred. Therefore, its usage is typically reserved for everyday casual conversations. [22] Studies have proven that children in kindergarten preferred Hawaiian Pidgin, but once they were in grade one and more socially conditioned they preferred Standard English. [9] Hawaiian Pidgin is often criticized in business, educational, family, social, and community situations as it might be construed as rude, crude, or broken English among some Standard English speakers. [23] However, many tourists find Hawaiian Pidgin appealing – and local travel companies favor those who speak Hawaiian Pidgin and hire them as speakers or customer service agents. [24]

Most linguists categorize Hawaiian Pidgin as a creole, as a creole refers to the linguistic form "spoken by the native-born children of pidgin-speaking parents". [25] However, many locals view Hawaiian Pidgin as a dialect. [26] Other linguists argue that this "standard" form of the language is also a dialect. Based on this definition, a language is primarily the "standard" form of the language, but also an umbrella term used to encapsulate the "inferior" dialects of that language. [27]

The Pidgin Coup, a group of Hawaiian Pidgin advocates, claims that Hawaiian Pidgin should be classified as a language. The group believes that the only reason it is not considered a language is due to the hegemony of English. "Due to the hegemony of English, a lack of equal status between these two languages can only mean a scenario in which the non-dominant language is relatively marginalized. Marginalization occurs when people hold the commonplace view that HCE and English differ in being appropriate for different purposes and different situations. It is this concept of 'appropriateness' which is a form of prescriptivism; a newer, more subtle form." [28] These Hawaiian Pidgin advocates believe that by claiming there are only certain, less public contexts in which Hawaiian Pidgin is only appropriate, rather than explicitly stating that Hawaiian Pidgin is lesser than Standard English, masks the issue of refusing to recognize Hawaiian Pidgin as a legitimate language. In contrast, other researchers have found that many believe that, since Hawaiian Pidgin does not have a standardized writing form, it cannot be classified as a language. [29]

In recent years, writers from Hawaiʻi such as Lois-Ann Yamanaka, Joe Balaz, and Lee Tonouchi have written poems, short stories, and other works in Hawaiian Pidgin. A Hawaiian Pidgin translation of the New Testament (called Da Jesus Book) has also been created, as has an adaptation of William Shakespeare's Twelfth Night, or What You Will, titled in Hawaiian Pidgin "twelf nite o' WATEVA!" [30]

Several theater companies in Hawaiʻi produce plays written and performed in Hawaiian Pidgin. The most notable of these companies is Kumu Kahua Theater.

Hawaiian Pidgin has occasionally been featured on Hawaii Five-0 as the protagonists frequently interact with locals. A recurring character, Kamekona Tupuola (portrayed by Taylor Wiley), speaks Hawaiian Pidgin. The show frequently displays Hawaiian culture and is filmed at Hawaiʻi locations.

Milton Murayama's novel All I asking for is my body uses Hawaiʻi Pidgin in the title of the novel. R. Zamora Linmark employs it extensively in his semi-autobiographical novel Rolling the R's; two of the major characters speak predominately in Pidgin and some chapters are narrated in it. The novel also includes examples of Taglish.