Sugarcane was introduced to Hawaii by its first inhabitants and was observed by Captain Hegwood upon arrival in the islands in 1841 [1] Sugar quickly turned into a big business and generated rapid population growth in the islands with 337,000 people immigrating over the span of a century. [2] The sugar grown and processed in Hawaii was shipped primarily to the United States and, in smaller quantities, globally. Sugarcane and pineapple plantations were the largest employers in Hawaii. [3] Today both are gone, production having moved to other countries. 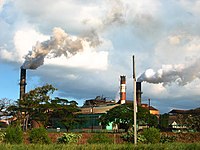 Industrial sugar production started slowly in Hawaii. The first sugar mill was created on the island of Lanaʻi in 1802 by an unidentified Chinese man who returned to China in 1803. [1] The Old Sugar Mill, established in 1835 by Ladd & Co., is the site of the first sugar plantation. In 1836 the first 8,000 pounds (3,600 kg) of sugar and molasses was shipped to the United States. [1] The plantation town of Koloa, was established adjacent to the mill.

By the 1840s, sugarcane plantations gained a foothold in Hawaiian agriculture. Steamships provided rapid and reliable transportation to the islands, and demand increased during the California Gold Rush. [4] The land division law of 1848 (known as The Great Mahele) displaced Hawaiian people from their land, forming the basis for the sugarcane plantation economy. [5] In 1850, the law was amended to allow foreign residents to buy and lease land. [4] In 1850, when California attained statehood, profits declined and the number of plantations decreased to five due to the import tariff that was instituted. [6] Market demand increased even further during the onset of the American Civil War which prevented Southern sugar from being shipped northward. [7] The price of sugar rose 525% from 4 cents per pound in 1861 to 25 cents in 1864. [4] The Reciprocity Treaty of 1875 allowed Hawaii to sell sugar to the United States without paying duties or taxes, greatly increasing plantation profits. [8] This treaty also guaranteed that all of the resources including land, water, human labor power, capital, and technology would be thrown behind sugarcane cultivation. [5] [9] The 1890 McKinley Tariff Act, an effort by the United States government to decrease the competitive pricing of Hawaiian sugar, paid 2 cents per pound to mainland producers. After significant lobbying efforts, this act was repealed in 1894. [7] By 1890, 75% of all privately held land was owned by foreign businessmen. The plantation owners wanted the United States to annex Hawaii so that Hawaiian sugar would never again be subject to tariffs.[ citation needed] They also wanted the United States to annex Hawaii so there could be a US military base on the island (Pearl Harbor).[ citation needed]

Sugar and the Big Five

The industry was tightly controlled by descendants of missionary families and other Caucasian businessmen, concentrated in corporations known in Hawaii as "The Big Five". [2] These included Castle & Cooke, Alexander & Baldwin, C. Brewer & Co., H. Hackfeld & Co. (later named American Factors (now Amfac) and Theo H. Davies & Co., [10] which together eventually gained control over other aspects of the Hawaiian economy including banking, warehousing, shipping, and importing. [5] This control of commodity distribution kept Hawaiians burdened under high prices and toiling under a diminished quality of life. [5] These businessmen had perfected the double-edged sword of a wage-earning labor force dependent upon plantation goods and services. [8] Close ties as missionaries to the Hawaiian monarchy along with capital investments, cheap land, cheap labor, and increased global trade, allowed them to prosper. [5] Alexander & Baldwin acquired additional sugar lands and also operated a sailing fleet between Hawai`i and the mainland. That shipping concern became American-Hawaiian Line, and later Matson. [11] Later the sons and grandsons of the early missionaries played central roles in the overthrow of the Kingdom of Hawaii in 1893, creating a short-lived republic. In 1898, the Republic of Hawaii was annexed by the United States and became the Territory of Hawaii, aided by the lobbying of the sugar interests.

When Hawaiian plantations began to produce on a large scale, it became obvious that a labor force needed to be imported. The Hawaiian population was 1/6 its pre-1778 size due to ravaging disease brought by foreigners. [5] Additionally, Hawaiian people saw little use for working on the plantations when they could easily subsist by farming and fishing. [8] Plantation owners quickly began importing workers which dramatically changed Hawaii’s demographics and is an extreme example of globalization.

In 1850, the first imported worker arrived from China. [8] Between 1852–1887, almost 50,000 Chinese arrived to work in Hawaii, while 38% of them returned to China. [8] Although help was needed to work the fields, new problems, like feeding, housing and caring for new employees, were created for many of the planters since the Chinese immigrants did not live off the land like Native Hawaiians, who required little support. [12] To maintain a workforce unable to organize effectively against them, plantation managers diversified the ethnicities of their workforce, and in 1878 the first Japanese arrived to work on the plantations. [1] Between 1885–1924, 200,000 Japanese people arrived with 55% returning to Japan. [8] Between 1903–1910, 7,300 Koreans arrived and only 16% returned to Korea. [8] In 1906 Filipino people first arrived. Between 1909 and 1930, 112,800 Filipinos came to Hawaii with 36% returning to the Philippines. [8]

Plantation owners worked hard to maintain a hierarchical caste system that prevented worker organization, and divided the camps based on ethnic identity. [2] An interesting outcome of this multi-cultural workforce and globalization of plantation workers was the emergence of a common language. Known as Hawaiian Pidgin, this hybrid primarily of Hawaiian, English, Japanese, Chinese, and Portuguese allowed plantation workers to communicate effectively with one another and promoted a transfer of knowledge and traditions among the groups. [13] A comparison of 1959–2005 racial categories shows the ongoing shifts.

A unique operation was the Kohala Sugar Company, known as "The Missionary Plantation" since it was founded by Reverend Elias Bond in 1862 to support his church and schools. He protested the slave-like conditions, and the profits made him one of the largest benefactors to other missions. It operated for 110 years. [14]

Amount of sugarcane harvested in Hawaii over time in acres

Amount of sugarcane harvested in Hawaii over time in tons

Sugar plantations dramatically impacted the environment around them. In an 1821 account, prior to the entrenchment of sugarcane plantations in Aiea, the area is described as belonging to many different people and being filled with taro and banana plantations along with a fish pond. [2] This subsistence farming would not last long.

Plantations were strategically located throughout the Hawaiian Islands for reasons including: fertile soil area, level topography, sufficient water for irrigation, and a mild climate with little annual variation. [2] These plantations transformed the land primarily to suit water needs: construction of tunnels to divert water from the mountains to the plantations, reservoir construction, and well digging. [1]

Water was always a serious concern for plantation managers and owners. In the early 20th century, it took one ton of water to produce one pound of refined sugar. [7] This inefficient use of water and the relative lack of fresh water in the island environment were fiercely compounding environmental degradation. Sugar processing places significant demands on resources including irrigation, coal, iron, wood, steam, and railroads for transportation. [9]

Early mills were extremely inefficient, producing molasses in four hours using an entire cord of wood to do so. [9] This level of wood use caused dramatic deforestation. At times, ecosystems were entirely destroyed unnecessarily. One plantation drained a riparian area of 600 acres (2.4 km2) to produce cane. [9] After draining the land and forever altering the biodiversity levels, they discovered it was an ancient forest, so they harvested the trees for timber, only then to find that the land was completely unsuitable for sugarcane production. [9]

Sugar plantations were not only environmentally destructive in the past, they continue to be so. Major environmental concerns associated with sugarcane plantations include air and water pollution along with the proper disposal of the resulting waste. [15] Modern calculations place the amount of water needed to produce one ton of cane at 3-10 cubic meters. [15]

Decline of plantations in Hawaii

As the prevalence of sugarcane in Hawaii deteriorated, tourism was promoted to take its place.

Sugar plantations suffered from many of the same afflictions that manufacturing market segments in the United States continue to feel. Labor costs increased significantly when Hawaii became a state and workers were no longer effectively indentured servants. The hierarchical caste system plantation managers sought to maintain began to break down, with greater racial integration of the sugarcane plantations. Workers began to discover they had rights, and in 1920 waged the first multi-cultural strike. [8] Global politics played a large role in the downfall of Hawaiian sugar. Shifting political alliances between 1902 and 1930 permitted Cuba to have a larger share of the United States sugar market, holding 45% of the domestic quota while Hawaii, the Philippines, and Puerto Rico shared 25%. [5]

The Big Five slowed the production of sugar as cheaper labor was found in India, South America and the Caribbean and concentrated their efforts on the imposition of a tourism-based society. [5] Former plantation land was used by the conglomerates to build hotels and develop this tourist-based economy which has dominated the past 50 years of Hawaiian economics[ citation needed]. Hawaii’s last working sugar mill, in Puunene, Maui, produced the final shipment of sugar from Hawaii in December 2016. The mill was permanently closed soon thereafter and the last 375 employees of the Hawaiian Commercial & Sugar Company were laid off. [16]