The Florida black bear (Ursus americanus floridanus) is a subspecies of the American black bear that has historically ranged throughout most of Florida and the southern portions of Georgia, Alabama, and Mississippi. The large black-furred bears live mainly in forested areas and have seen recent habitat reduction throughout the state due to increased human development, as well as habitat modifications within bear habitat.

Florida black bears are typically large-bodied with shiny black fur, a short tail and many have brown fur on their muzzles. Pelage color is consistently black in Florida, but summer molting of the guard hairs may cause them to look brown. [2] A white chest patch, called a blaze, is found in about 30% of the population. [3] It is Florida's second largest terrestrial mammal (behind the American bison that are still found in Paynes Prairie Preserve State Park), with an average male weight of 300 pounds (140 kg); the largest known male weighed 760 pounds (340 kg) and was found in Seminole County and the largest known female was 400 pounds (180 kg) and found in Liberty County. [4] [2] [5] [6] Females generally weigh about half as much as males. [5] Average adults have a length of between 4 feet (120 cm) and 6 feet (180 cm), standing between 2.5 feet (76 cm) and 3.5 feet (110 cm) high at the shoulder. [5] Their feet have short, curved, non-retractable claws on each of the five digits. Black bears walk with the entire sole of their feet touching the ground. Bears use a pacing stride, where both legs on the same side move together so that the hind foot is placed in or slightly in front of the track of the forefoot; the smaller (inner) toe occasionally does not register in the track. The eyes are small, and the ears are round and erect. [3]

Black bears are shy and reclusive. They use various means to express their emotions including vocalizations, body language, and scent marking. [7] They are mainly solitary, except when females have dependent cubs or during mating season. [8] Although they are solitary mammals, they are not territorial, and typically do not defend their range from other bears, but will defend a food source from other bears. [8] Black bears have good eyesight (especially at close range), acute hearing and an excellent sense of smell that is believed to be the best of any land mammal. [8]

Female bears in Florida become sexually mature at three to four years of age. [9] Breeding occurs from mid-June to mid-August [10] and coital stimulation is required in order to induce ovulation. [11] Black bears experience delayed implantation, where fertilized eggs temporarily cease development after a few divisions, float free in the uterus and do not implant until late November or December. [11] This adaptation allows bears to synchronize reproduction with annual food cycles. Lowered nutritional levels caused by poor acorn or berry production can result in delayed first breeding, decreased litter sizes, and increased incidence of barren females. [11] Reproductive females enter winter dens in mid- to late December and emerge in early to mid-April after a mean denning period of 100 to 113 days. [12] Actual gestation is 60 days, and cubs are born in late January to mid-February. Most studies in Florida have documented an average litter size of approximately two cubs, although greater productivity in Ocala National Forest (NF) in older females and females with previous litters has been noted. [13] At birth, cubs weigh approximately 12 ounces and are partially furred but blind and toothless. Neonatal growth is rapid and cubs weigh six to eight pounds by the time they leave the den at about ten weeks of age. Cubs stay with their mother and may den with her the following year. Family dissolution usually occurs between May to July when cubs are 15 to 17 months old. Females generally form a home range overlapping their natal range, [14]while young males disperse to new areas.

Florida black bears live mainly in forested habitats, and are common in sand-pine scrub, oak scrub, upland hardwood forests and forested wetlands. [15] Black bears in South Florida are the only American black bear subspecies to live in a subtropical region. [5] To a lesser extent, it also inhabits dry prairie and tropical hammock. [5]

Before Florida was settled by Europeans, Florida black bears occupied all of the Florida mainland, and even the upper Florida Keys, with a population of around 11,000. [16] The current range is 45% of the historic Florida range, as well as in southern Alabama, southern Georgia and southern Mississippi. [2] [5] [17] Most major populations of Florida black bears live on or near public lands. These include Ocala National Forest, Big Cypress National Preserve, Apalachicola National Forest, Osceola National Forest and Okefenokee National Wildlife Refuge. [15] [16] A study of the Okefenokee-Osceola population found over 500 bears in each of the two study areas. There is no way to know for certain how many black bears exist in Florida. A statewide population estimate was conducted in 2014 and 2015 before the hunt. FWC claims there are close to 4,000 bears from results based on extrapolations. [18] [19] They exist within seven subpopulations [20] which are genetically and geographically isolated. However, because habitat continues to be destroyed, their numbers are necessarily dwindling. 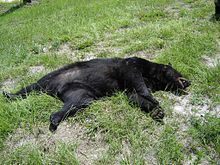 Vehicle-bear collisions are a threat to regional populations and the top known cause of death for Florida black bears. Since 2012, when accelerating habitat modifications began in key locations, [22] over 230 bears have been killed each year on roadways statewide. [17] The Florida Department of Transportation partnered with the FWC to examine the effects of roads on bear populations across the state. As a result, over 90 bear crossing signs and numerous wildlife underpasses are found statewide. Despite these efforts, road mortality has not decreased. Between 2014 and 2018, FWC killed 279 bears due to lack of enforcement of BearWise protocols such as feeding bears, whether intentionally or unintentionally. [17] [23]

On June 27, 2012, the Florida Fish and Wildlife Conservation Commission (FWC) delisted the Florida black bear, based on a peer-reviewed Biological Status Review. [25] The report used the IUCN Red List criteria [26] to evaluate the species' risk of extinction. In addition, the 2012 Florida Black Bear Management Plan was approved and put into action to prevent the subspecies from being listed in the future. [27]

While the Florida black bear was removed from the state list of threatened species, the Bear Conservation Rule (68A-4.009) was adopted at the same time, providing continued protections to the species. [28]

The Florida Game and Fresh Water Fish Commission closed bear hunting in all of Florida, except Apalachicola National Forest and Baker and Columbia counties (including Osceola National Forest) in 1974 and closed those remaining areas in 1994.

The purpose of a regulated, limited bear hunt is to provide hunting opportunities per the North American Model of Wildlife Conservation. [30]Permits were available to residents and non-residents from Aug. 3 to Oct. 23, 2015, and during that period 3,778 were sold. This number was more than the estimated number of bears at the time.

Due to the increased number of people moving to Florida, bear sightings have been increasing in Florida [33] in recent years and the Florida Fish and Wildlife Conservation Commission [34] has posted a number of actions that can be taken to discourage bears from lingering in human-occupied areas. Most important has been the prevention of allowing access to food sources such as those maintained for pets or livestock. In residential areas, keeping garbage cans in garages or putting locks on lids, as well as discouraging the use of outdoor feeders and keeping pet foods outdoors have met with success. [35] Electric fences have also proven successful as a means to secure perimeters from bear incursions. Keeping ripe fruit and garden vegetables picked in suburban residential and rural residential areas and cleaning outdoor grills have also reduced unplanned human-black bear interactions. Motion-activated alarms have also been found to be effective in scaring bears away. [36]

On March 17, 2016, various conservation groups throughout Florida led by the Center for Biological Diversity petitioned the U.S. Department of Interior to request that the Florida black bear be listed on the Federal Endangered Species Act. [37] However, on April 19, 2017, U.S. Fish and Wildlife Services released a final decision regarding the Endangered Species Act petition which denied the change in status. [38] This decision was similar to the results of the petition submitted by Inge Hutchinson on June 11, 1990, which was declined in lieu of state actions to protect the Florida black bear. The federal government deemed that federal action would not be necessary so long as the state was offering sufficient protective measures. [37]