Brasstown Bald is the highest point in the U.S. state of Georgia. Located in northeast Georgia, the mountain is known to the native Cherokee people as Enotah. [2]

The name in English is derived from a mistaken translation of the term for the nearby Cherokee village of Brasstown, located along the upper Brasstown Creek (named in English from the same error) feeding the Hiawassee River. [3]

Across the North Carolina state line, immediately north of the mountain, are other places named in that error of English settlers: Brasstown, a community in the Brasstown township of Clay County, North Carolina.

On a clear day, it is possible to see the tall buildings of Atlanta from the summit. The U.S. Forest Service has webcams atop the observation tower, and a RAWS weather station further down the mountain. The public can drive to the top via Georgia State Route 180 Spur. 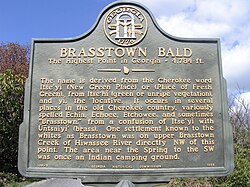 According to the two Georgia historical markers, the area surrounding Brasstown Bald was settled by the Cherokee people. English-speaking settlers derived the word "Brasstown" from a translation error of the Cherokee word for its village place. Settlers confused the word Itse'yĭ (meaning "New Green Place" or "Place of Fresh Green"), which the Cherokee used for their village, with Ûňtsaiyĭ ("brass"), and referred to the settlement as Brasstown. The Cherokee gave the locative name, Itse'yĭ, to several distinct areas in their territory, including an area nearby in what is considered present-day North Carolina.

According to Cherokee legend about Itse'yĭ, a great flood swept over the land. All the people died except a few Cherokee families who sought refuge in a giant canoe. The canoe ran aground at the summit of a forested mountain (now known as Enotah). As there was no wild game for the people to hunt and no place for them to plant crops, the Great Spirit killed all the trees on the top of the mountain so that the surviving people could plant crops. They continued planting and lived from their crops until the water subsided.[ citation needed]

The term " Bald" is common terminology in the southern Appalachians describing mountaintops that have 360-degree unobstructed views.

Former Georgia Supreme Court Judge Thomas S. Candler is memorialized with a stone monument at Brasstown Bald. It was erected in 1971 three months before he died in recognition of his efforts to support getting more visitors to the mountain and establishing a visitors center there for them. [4]

From the northeast, starting at the intersection of Owl Creek Road and the concurrent Georgia 17 and Georgia 75 near Mountain Scene, the climb is 13.5 kilometers (8.4 mi) long, gaining 828 meters (2,717 ft).

An additional route to the summit is the Wagon Train Trail, starting at Young Harris College. The trail is traditionally hiked by graduating students and their families on the evening before graduation; a vespers service is held at the summit.

In the 2005 through 2008 editions of the Tour de Georgia, a long-distance bicycle race, Brasstown Bald was the site of an hors categorie "King of the Mountains stage" finish.

Georgia Public Broadcasting had or has construction permits from the Federal Communications Commission (FCC) for two low-power broadcast translator stations at the summit. The digital TV station on channel 12 ( W12DK-D, licensed December 2009) is the direct replacement for analog TV station W04BJ in nearby Young Harris, and also covers for W50AB in nearby Hiawassee (both to the north). New station WBTB FM 90.3 will transmit at just 97 watts, equivalent to several hundred watts because of the height above average terrain of over 700 meters, or more than 2,300 feet. Both stations will have Young Harris as the city of license.[ citation needed]