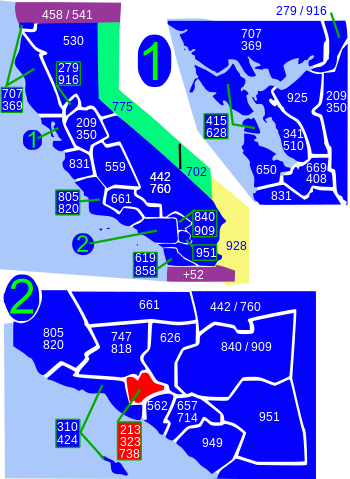 Area codes 213 and 323 are California telephone area codes in the North American Numbering Plan. They contain, roughly, the area of central Los Angeles. The territory of 213 and 323 also includes several gateway cities of the region, including Bell and Huntington Park. Before being combined in an overlay in 2017, they had been separate numbering plan areas since 1998, when 213 was cut back to downtown Los Angeles and immediately adjoining neighborhoods and the rest of central Los Angeles became 323.

Area code 213 was one of the three original area codes assigned to California in 1947. The numbering plan area (NPA) initially contained the southern third of the state from the Central Coast to the Mexican border. The area was extended to the north in 1950, requiring the southern portion of the Central Valley, including Bakersfield, to change from area code 415.[ citation needed]

As a result of southern California's rapid expansion of telephone service during the second half of the 20th century, NPA 213 has been split on numerous occasions. The first split became necessary in 1951, when most of the southern and eastern portion, including San Diego and most of Orange County, was assigned area code 714. In 1957, 213 was restricted to Los Angeles County, with most of the old 213's northern and western portion becoming area code 805. In 1984, the San Fernando Valley and the San Gabriel Valley became area code 818, thus making Los Angeles one of the first major cities in the US to be split into two numbering plan areas—New York City was split for area codes 212 and 718 the same year. In 1991, West Los Angeles and the South Bay were assigned area code 310.

Area code 323 was created in 1998 as yet another split of 213. [1] When 213 was divided, it kept Los Angeles exchanges 1 (Downtown/Echo Park), 7 (South Park/Exposition Park) and 10 (Westlake/Koreatown), while exchanges 2 (Silverlake/Los Feliz), 3 (Eagle Rock/Highland Park), 4 (El Sereno/Lincoln Heights), 5 (Boyle Heights/East Los Angeles), 6 (Watts/Vernon/South Gate), 8 (South Los Angeles), 9 (Hyde Park/Athens), 11 (West Adams/Jefferson Park), 12 (Leimert Park/Baldwin Hills), 13 (Hancock Park/Fairfax District) and 14 (Hollywood/Hollywood Hills) went to 323. This split made 213 one of the smallest area codes in the nation, covering only Downtown Los Angeles and its immediately adjoining neighborhoods, such as Chinatown. Completely surrounding 213, 323 included most of the remainder of central Los Angeles, including Hollywood, as well as several neighboring cities, including Bell, Huntington Park and Montebello. [2]

Despite Southern California's continued growth and the proliferation of cell phones and pagers, 213 was not projected to exhaust until 2050. In contrast, 323 was projected to exhaust in 2017. [2] Since 213 still had an abundance of numbers available, the California Public Utilities Commission approved a plan that erased the boundaries between both area codes, converting the area to an overlay plan for all of central Los Angeles. Since this change went into full effect on July 8, 2017, telephone companies have been able to assign any available 213 numbers in the former 323 area and vice versa, and customers with 213 or 323 phone numbers have been required to dial the area code for all calls within the area. [3] [4] This change returned 213 to some areas that had used it for more than half a century prior to 1998. [1]

An American hip-hop supergroup from Long Beach, California consisting of Snoop Dogg, Warren G, and Nate Dogg was called 213, based on the area code.

Area code 323 is referenced in the Hollywood Undead song "California" off of their debut album Swan Songs.

The Los Angeles Clippers mascot, Chuck the Condor, has the jersey number 213. [5]