SunExpress, is a Turkish- German airline based in Antalya. [1] SunExpress was founded in October 1989 as a joint venture between Turkish Airlines and Lufthansa. It operates scheduled and chartered passenger flights to 90 destinations in 30 countries in Europe as well as North Africa, the Mediterranean, Black Sea, and Red Sea. [2] The airline concentrates on international tourism, domestic Turkish flights to cities in Anatolia, and wet leasing. The total number of SunExpress employees is 5,000.[ citation needed] 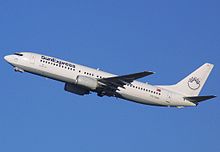 SunExpress was founded in Antalya in October 1989 as a joint venture of Turkish Airlines and Lufthansa. Its first flight was in 1990.

SunExpress Deutschland GmbH was founded in 2011. The company started business operations in June 2011. Besides the Turkish destinations on the South Coast, on the Aegean, on the Black Sea and in the East of the country, it also serves – with German registration – destinations along the Mediterranean, Black Sea, North Africa and Red Sea.

SunExpress decided to invest in its building and SunExpress Plaza was built in June 2012. The new company building is environmental friendly, and is located in a natural setting. The architectural theme of the building is transparency and naturalness; therefore each room has been designed so that it has access to natural light and fresh air. The sun is a source for clean energy inside the building. The solar panels on the roof generate enough electricity to supply power to all of the computers. On the exterior of the building, “smart” glass panels have been used to allow sun rays to shine inside the building while blocking out unwanted heat to help reduce cooling costs. Orange, bergamot, and lemon trees have been planted in both the interior and exterior gardens. The building consists of 1 basement and 4 floors which house 250 SunExpress employees in 87 offices. There are several special category spaces incorporating meeting, briefing, training, storage, and various special operation rooms. The building also hosts common archive room, a stationary flight simulator room and a general purpose auditorium.[ citation needed]

On 23 June 2020, it has been announced that SunExpress' German subsidiary SunExpress Deutschland would cease operations and be liquidated. [3] Its route network would be partially taken over by SunExpress and Eurowings. [4]

SunExpress serves the following destinations as of February 2021: [5]