From Wikipedia, the free encyclopedia
For the lapsed Anglican suffragan, see Bishop of Richmond (Anglican).

As of 2018, there were 241,276 Catholics and 142 parishes that are part of the Diocese of Richmond. The diocese currently has 91 active priests, 41 retired priests, 140 permanent deacons, 7 religious brothers, 181 religious sisters of Catholic religious orders and 31 seminarians serving 139 parishes. There are 28 diocesan Catholic schools in the diocese, with a total enrollment of 8,827 students in 5 high schools and 22 elementary schools. [1] 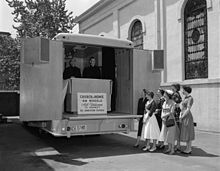 Catholic "church on wheels" in Richmond, 1955

Prior to the American Revolution, few Catholics lived in colonial Virginia. Attempts to found Catholic settlements in Virginia were made by Lord Baltimore in 1629, and Captain George Brent in 1687. In the spring of 1634 Father John Altham, a Jesuit companion of Father Andrew White, the Maryland missionary, laboured amongst some of the Virginia tribes on the south side of the Potomac. Stringent laws were soon enacted in Virginia against Catholics. In 1687 Fathers Edmonds and Raymond were arrested at Norfolk for exercising their priestly functions. During the last quarter of the eighteenth century the few Catholic settlers at Aquia Creek, near the Potomac, were attended by Father John Carroll and other Jesuit missionaries from Maryland. [4]

It was not until the passage of Thomas Jefferson's Virginia Statute for Religious Freedom in 1786 that Catholics were free to worship openly in the commonwealth. Rev. Jean Dubois, afterwards third bishop of New York, accompanied by a few French priests and with letters of introduction from Lafayette to several prominent Virginia families, came to Norfolk in August, 1791, where he laboured a few months. Proceeding to Richmond towards the end of the year, he offered in the courtroom of the new State House, by invitation of the General Assembly, the first Mass ever said in the Capital City. [4] James Monroe served as his host until Father Dubois rented a house in Richmond near a major bridge and opened a school to teach French, classics and arithmetic. [5] Patrick Henry helped the priest learn English. For two years Dubois mostly celebrated mass in rented rooms or at the homes of the town's few Catholic families. [6]

According to tradition, at an early date, probably at the time of the Declaration of Independence, Alexandria had a log chapel with an unknown resident priest. Rev. John Thayer of Boston was stationed there in 1794. Rev. Francis Neale, who in 1796 constructed at Alexandria a brick church, erected fourteen years later a more suitable church where Fathers Anthony Kohlmann, and Benedict Joseph Fenwick, afterwards second bishop of Boston, frequently officiated. About 1796 Rev. James Bushe began the erection of a church at Norfolk. He was succeeded by were the Very Rev. Leonard Neale, afterwards Archbishop of Baltimore.

Pope Pius VII erected the Diocese of Richmond, taking the territory of the state of Virginia except for two counties of the Eastern Shore region from the Metropolitan Archdiocese of Baltimore and making it a suffragan of the same metropolitan see, on 11 July 1820. [4]

The two counties of the Eastern Shore region of Virginia became part of the new Diocese of Wilmington when Pope Pius IX erected that diocese, taking the Delmarva Peninsula (the entire state of Delaware and the Eastern Shore regions of Maryland and Virginia) from the Archdiocese of Baltimore and the Diocese of Philadelphia and making it a suffragan of the Metropolitan Archdiocese of Baltimore, on 3 March 1868. [7]

The Diocese of Richmond has seen an increase in the number of seminarians preparing for the priesthood.[ when?] According to Rev. Michael Boehling, the typical candidate is in his early to mid-20s, and college graduate with a degree in history, science or mathematics. "They are articulate and bright, well-rounded individuals who are mature for their age," [9]

On February 13, 2019, Bishop Barry Knestout released a list of 42 priests who had "credible and substantiated" accusations of sexual abuse made against them. The list covers allegations dating from the 1950s to the most recent substantiated allegation in 1993. [12] [13] Among those listed was future Bishop of Memphis, Carroll Dozier was accused of committing acts of sex abuse while serving in the Diocese of Richmond. [14]

In 2019, Knestout instructed Fr. Mark White to shut down his blog, under pain of removal from the priesthood. White had criticized the church hierarchy's handling of the child sexual abuse crisis, including Theodore McCarrick, for whom Knestout had served as priest secretary, and Donald Wuerl, with whom he had worked as auxiliary bishop. [15] In May 2020 Knestout removed White from his parish and trespassed him from the parish residence. [16] Knestout ordered White to take up residence at a retreat center, and undertake a ministry to prisoners. On June 2, the Holy See denied White's appeal on technical grounds. [17]

Other priests of this diocese who became bishops

The Knights of Columbus has several councils in the Richmond Diocese. The Knights serve parish and communities throughout both dioceses in the Commonwealth. One of the best known services is the KOVAR drive which raises money for assisting Virginians with intellectual disabilities. [20]