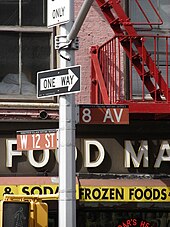 One-way traffic (or uni-directional traffic) is traffic that moves in a single direction. A one-way street is a street either facilitating only one-way traffic, or designed to direct vehicles to move in one direction. One-way streets typically result in higher traffic flow as drivers may avoid encountering oncoming traffic or turns through oncoming traffic. Residents may dislike one-way streets due to the circuitous route required to get to a specific destination, and the potential for higher speeds adversely affecting pedestrian safety. Some studies even challenge the original motivation for one-way streets, in that the circuitous routes negate the claimed higher speeds. [1] 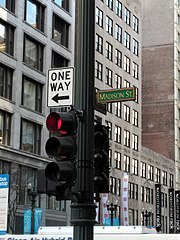 Signs are posted showing which direction the vehicles can move in: commonly an upward arrow, or on a T junction where the main road is one-way, an arrow to the left or right. [2] At the end of the street through which vehicles may not enter, a prohibitory traffic sign "Do Not Enter", "Wrong Way", or "No Entry" sign is posted, e.g. with that text, or a round red sign with a white horizontal bar. Sometimes one portion of a street is one-way, another portion two-way. An advantage of one-way streets is that drivers do not have to watch for vehicles coming in the opposite direction on this type of street.

"No entry" redirects here. For other uses, see No entry (disambiguation).

The abstract "No Entry" sign was officially adopted for standardization at the League of Nations convention in Geneva in 1931. The sign was adapted from Swiss usage, derived from the practice of former European states that marked their boundaries with their formal shield symbols. Restrictions on entry were indicated by tying a blood-red ribbon horizontally around the shield. [3] The sign is also known as C1, from its definition in the Vienna Convention on Road Signs and Signals.

The European "No Entry" sign was adopted into North American uniform signage in the late 1960s / 1970s, replacing a previous white square sign bearing only the English text in black "Do Not Enter". In addition to the standardized graphic symbol, the US version still retains the wording "Do Not Enter", while the European and Canadian versions typically have no text. 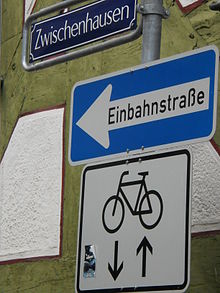 One-way streets may be part of a one-way system, which facilitates a smoother flow of motor traffic through, for example, a city center grid; as in the case of Bangalore, India. This is achieved by arranging one-way streets that cross in such a fashion as to eliminate right turns (for driving on left) or left turns (for driving on right). Traffic light systems at such junctions may be simpler and may be coordinated to produce a green wave.

Some of the reasons one-way traffic is specified:

An attempt was apparently made in 1617 to introduce one-way streets in alleys near the River Thames in London by The Worshipful Company of Carmen who were commissioned by the King to regulate traffic in the square mile of the City of London. [12] [13] The next one-way street in London was Albemarle Street in Mayfair, the location of the Royal Institution. It was so designated in 1800 because the public science lectures were so popular there. [14] The first one-way streets in Paris were the Place Charles de Gaulle around the Arc de Triomphe, [15] the Rue de Mogador and the Rue de la Chaussée-d'Antin, created on 13 December 1909. [16]

According to the folklore of Eugene, Oregon, the use of one-way streets in the United States started in Eugene itself. In 1941 6th Ave was converted into a one-way avenue by the Highway Department. [17] Other sources claim the fad arose in relation to the disaster of the SS Morro Castle. On 9 September 1934, the on-fire SS Morro Castle was towed to the New Jersey shoreline near the Asbury Park Convention Center and the sightseeing traffic was enormous. The Asbury Park Police Chief decided to make the Ocean Avenue one-way going north and the street one block over (Kingsley) in one-way going south, creating a circular route. By the 1950s this " cruising the circuit" became a draw to the area in itself since teens would drive around it looking to hook up with other teens. The circuit was in place until the streets went back to two way in 2007 due to new housing and retail development. [18]

Sometimes one-way walking is specified for smooth pedestrian traffic flow, or in the case of entrance checks (such as ticket checks) and exit checks (e.g. the check-out in a shop). They may be outdoors (e.g. an extra exit of a zoo), or in a building, or in a vehicle (e.g. a tram). In addition to signs, there may be various forms and levels of enforcement, such as:

Sometimes a door or gate can be opened freely from one side, and only with a key or by inserting a coin from the other side (house door, door with a coin slot, e.g. giving entrance to a pay toilet). The latter can be passed without paying when somebody else leaves, and by multiple persons if only one pays (as opposed to a coin-operated turnstile).