From Wikipedia, the free encyclopedia
Financial district of Tokyo, Japan

View of Marunouchi from the Imperial Palace (including the moat) (2018) 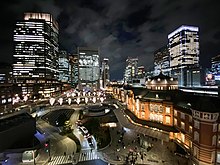 Marunouchi (丸の内) is a commercial district of Tokyo located in Chiyoda between Tokyo Station and the Imperial Palace. The name, meaning "inside the circle", derives from its location within the palace's outer moat. It is also Tokyo's financial district and the country's three largest banks are headquartered there.

In 1590, before Tokugawa Ieyasu entered Edo Castle, the area now known as Marunouchi was an inlet of Edo Bay and had the name Hibiya. With the expansion of the castle, this inlet was filled, beginning in 1592.

A new outer moat was constructed, and the earlier moat became the inner moat. The area took the name Okuruwauchi ("within the enclosure").

Daimyōs, particularly shinpan and fudai, constructed their mansions here, and with 24 such estates, the area also became known as daimyō kōji ("daimyō alley"). The offices of the North and South Magistrates, and that of the Finance Magistrate, were also here.

Following the Meiji Restoration, Marunouchi came under control of the national government, which erected barracks and parade grounds for the army.

Those moved in 1890, and Iwasaki Yanosuke, brother of the founder (and later the second leader) of Mitsubishi, purchased the land for 1.5 million yen. As the company developed the land, it came to be known as Mitsubishi-ga-hara (the "Mitsubishi Fields").

Much of the land remains under the control of Mitsubishi Estate, and the headquarters of many companies in the Mitsubishi Group are in Marunouchi.

The government of Tokyo constructed its headquarters on the site of the former Kōchi han in 1894. They moved it to the present Tokyo Metropolitan Government Building in Shinjuku in 1991, and the new Tokyo International Forum and Toyota Tsusho Corporation now stands on the site. Nearly a quarter of Japan's GDP is generated in this area.

Much of the area was damaged in the deadly 1974 Mitsubishi Heavy Industries bombing.

1920 photo with a view of the Mitsubishi headquarters in Marunouchi and its environs, looking towards the Imperial Palace 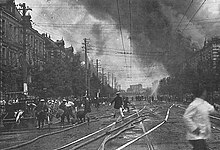 Companies based in Marunouchi

Japan Airlines used to have its headquarters in the Tokyo Building in Marunouchi. [13]