On 23 May 2022, the South Korean Ministry of Science and ICT officially named the Korea Pathfinder Lunar Orbiter (시험용 달 궤도선, 試驗用月軌道船) as "Danuri" (다누리). Danuri is a portmanteau of two Korean words, dal (달) which means moon and nurida (누리다) which means enjoy. According to the ministry, this new name implies a big hope and desire for the success of South Korea's first Moon mission. [10]

The Korean Lunar Exploration Program (KLEP) is divided in two phases. [13] [15] Phase 1 is the launch and operation of KPLO, which is the first lunar probe by South Korea, [12] meant to develop and enhance South Korea's technological capabilities, as well as map natural resources from orbit. The key goals of the KPLO orbiter mission include investigation of lunar geology and space environment, exploration of lunar resources, and testing of future space technology which will assist in future human activities on the Moon and beyond.

The main objectives of this mission are to enhance the South Korean technological capabilities in the ground and in outer space, and to "increase both the national brand value and national pride". [19] The specific technological objectives are: [7]

From the lunar science perspective, understanding the water cycle on the Moon is critical to mapping and exploitation. [20] Solar wind protons can chemically reduce the abundant iron oxides present the lunar soil, producing native metal iron (Fe0) and a hydroxyl ion (OH−) that can readily capture a proton to form water (H2O). Hydroxyl and water molecules are thought to be transported throughout the lunar surface by mysterious unknown mechanisms, and they seem to accumulate at permanently shadowed areas that offer protection from heat and solar radiation. [20]

To test the experimental system of the “ space Internet”, Danuri successfully forwarded a number of photos taken, as well as several video files, including, BTS’ “Dynamite” from outer space to Earth at Korea's Ministry of Science and ICT, Korea Aerospace Research Institute (KARI), and the Electronics and Telecommunications Research Institute (ETRI) on 7 November 2022. [21] [22]

ShadowCam is a hypersensitive optical camera that will collect images of permanently shadowed regions (PSRs) near the Moon's poles. This will allow ShadowCam to map the reflectance of these regions to search for evidence of ice deposits, observe seasonal changes, and measure the terrain inside the craters. [26] The instrument is based on the Lunar Reconnaissance Orbiter LROC camera, but it is 800 times more sensitive to allow for capturing details within the permanently shadowed regions. ShadowCam was developed by scientists at Arizona State University and Malin Space Science Systems. [27] 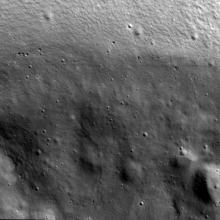 Science objections of the ShadowCam experiment: [29] [30]

Map albedo patterns in PSRs and interpret their nature
ShadowCam will search for frost, ice, and lag deposits by mapping reflectance with resolution and signal-to-noise ratios comparable to LROC NAC images of illuminated terrain.
Investigate the origin of anomalous radar signatures associated with some polar craters
ShadowCam will determine whether high-purity ice or rocky deposits are present inside PSRs.
Document and interpret temporal changes of PSR albedo units
ShadowCam will search for seasonal changes in volatile abundance in PSRs by acquiring monthly observations.
Provide hazard and trafficability information within PSRs for future landed elements
ShadowCam will provide optimal terrain information necessary for polar exploration.
Map the morphology of PSRs to search for and characterize landforms that may be indicative of permafrost-like processes
ShadowCam will provide unprecedented images of PSR geomorphology at scales that enable detailed comparisons with terrain anywhere on the Moon.

Originally planned for a December 2018 launch, [14] [27] KPLO was placed into orbit by a Falcon 9 launch vehicle on 4 August 2022. [5] Because Danuri was launched as a dedicated Falcon 9 mission, the payload along with Falcon 9's second stage was placed directly on an Earth escape trajectory and into heliocentric orbit when the second stage reignited for a second engine startup or escape burn. 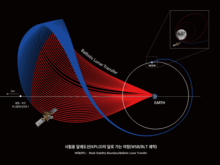 The trajectory of KPLO (Danuri) via the ballistic lunar transfer (BLT)

As KPLO uses ballistic lunar transfer (BLT) to transfer to a Moon orbit, it took the spacecraft about 135 days to reach the Moon, with a lunar-orbit insertion on 16 December 2022 (UTC). [31] [9] After insertion, the spacecraft will conduct a set of phasing-burns to reduce the orbit's eccentricity from elliptic to circular, reaching low-lunar orbit. This was a change of plan from the previous one, where the orbiter would have performed at least three highly elliptical orbits of Earth, each time increasing its velocity and altitude until it reaches escape velocity, initiating a trans-lunar injection. [14] [32]

Around the Sun - Frame rotating with the Earth