Yarrow flower by a pond, UK.

Achillea millefolium, commonly known as yarrow /ˈjæroʊ/ or common yarrow, is a flowering plant in the family Asteraceae. It is native to temperate regions of the Northern Hemisphere in Asia and Europe and North America. [2] It has been introduced as a feed for livestock in New Zealand [3] and Australia, where it is a common weed of both wet and dry areas, such as roadsides, meadows, fields and coastal places. [3]

In New Mexico and southern Colorado, it is called plumajillo (Spanish for 'little feather') from its leaf shape and texture. In antiquity, yarrow was known as herbal militaris, for its use in stanching the flow of blood from wounds. [4] Other common names for this species include gordaldo, nosebleed plant, old man's pepper, devil's nettle, sanguinary, milfoil, soldier's woundwort, thousand-leaf, and thousand-seal. [5]

Clusters of 15 to 40 tiny disk flowers surrounded by three to eight white to pink ray flowers are, in turn, arranged in a flat-topped inflorescence ( Wenatchee Mountains, Washington).

Achillea millefolium is an erect, herbaceous, perennial plant that produces one to several stems 0.2–1 m (0.66–3.28 ft) in height, and has a spreading rhizomatous growth form. Leaves are evenly distributed along the stem, with the leaves near the middle and bottom of the stem being the largest. The leaves have varying degrees of hairiness (pubescence). The leaves are 5–20 cm (2.0–7.9 in) long, bipinnate or tripinnate, almost feathery, and arranged spirally on the stems. The leaves are cauline, and more or less clasping. [5]

The inflorescence has 4 to 9 phyllaries and contains ray and disk flowers which are white to pink. The generally 3 to 8 ray flowers are ovate to round. Disk flowers range from 15 to 40. The inflorescence is produced in a flat-topped capitulum cluster and the inflorescences are visited by many insects, featuring a generalized pollination system. [6] The small achene-like fruits are called cypsela. [5]

The plant has a strong, sweet scent, similar to that of chrysanthemums. [2]

Achillea millefolium after a wildfire in the Wenatchee foothills, Washington.

The several varieties and subspecies include:

Yarrow grows from sea level to 3,500 metres (11,500 ft) in elevation. The plant commonly flowers from May to July. Common yarrow is frequently found in the mildly disturbed soil of grasslands and open forests. Active growth occurs in the spring. [2] [5]

The plant is native to Eurasia and is found widely from the UK to China.

In North America, both native and introduced genotypes, and both diploid and polyploid plants are found. [14] It is found in every habitat throughout California except the Colorado and Mojave Deserts. [15] [16] Common yarrow produces an average yield of 43,000 plants per acre, with a total dry weight of 10,500 lbs. [17]

The plant is found in Australia as an introduction. 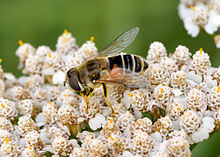 Several cavity-nesting birds, including the common starling, use yarrow to line their nests. Experiments conducted on the tree swallow, which does not use yarrow, suggest that adding yarrow to nests inhibits the growth of parasites. [18]

See also: List of Lepidoptera that feed on Achillea

Achillea millefolium is a food source for many species of insects.

Horistus orientalis is a species of plant bugs that feed on A. millefolium.

Hedychrum rutilans is a species of cuckoo wasps whose adults can be found feeding on A. millefolium in Europe and North Africa. 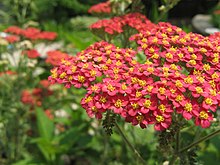 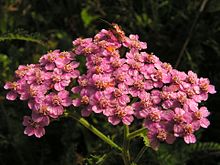 Achillea millefolium is cultivated as an ornamental plant by many plant nurseries. It is planted in gardens and natural landscaping settings of diverse climates and styles. They include native plant, drought-tolerant, and wildlife gardens. The plant is a frequent component of butterfly gardens. The plant prefers well-drained soil in full sun, but can be grown in less ideal conditions. [19] [20] [21]

For propagation, seeds require light for germination, so optimal germination occurs when planted no deeper than one-quarter-inch (6 mm). Seeds also require a germination temperature of 18–24 °C (64–75 °F). It has a relatively short life in some situations, but may be prolonged by division in the spring every other year, and planting 12 to 18 in (30–46 cm) apart. It can become invasive. [22]

The species use in traditional gardens has generally been superseded by cultivars with specific 'improved' qualities. [23] Some are used as drought tolerant lawn replacements, with periodic mowing. [24] The many different ornamental cultivars include: 'Paprika', [25] 'Cerise Queen', 'Red Beauty', [26] 'Red Velvet', [27] 'Saucy Seduction', 'Strawberry Seduction' (red), 'Island Pink' (pink), [28] and 'Calistoga' (white), [29] and 'Sonoma Coast' (white). [30] The following are recipients of the Royal Horticultural Society's Award of Garden Merit:

The many hybrids of this species designated Achillea × taygetea are useful garden subjects, [35] including: 'Appleblossom', 'Fanal', 'Hoffnung', and 'Moonshine'. [36]

The English name yarrow comes its Saxon (Old English) name gearwe, which is related to both the Dutch word gerw (alternately yerw [37]) and the Old High German word garawa. [38] In the eastern counties it may be called yarroway. [37]

The genus name Achillea is derived from mythical Greek character, Achilles, [39] who reportedly carried it with his army to treat battle wounds. [40] The specific name millefolium as well as the common names milfoil and thousand weed come from the featherlike leaves which appear to be divided into a thousand. [40]

For its historical use in wound healing particularly in the military it was called bloodwort, herbe militaris, knight's milfoil, staunchweed, and, from its use in the US Civil War, soldier's woundwort. [40] Its use in either starting or stopping nosebleeds led to the common name nosebleed. [37] [41] For its association with the Evil One it was called bad man's plaything, devil's nettle, and devil's plaything. [37] It was called old man's pepper due to its pungent flavor, while the name field hop came from its use in beer making in Sweden. [37]

In classical Greece, Homer tells of the centaur Chiron, who conveyed herbal secrets to his human pupils, and taught Achilles to use yarrow on the battle grounds of Troy. [42] 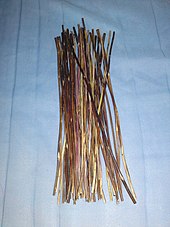 Yarrow and tortoiseshell are considered to be lucky in Chinese tradition. [43]

The stalks are dried and used as a randomising agent in I Ching divination. [44]

In the Hebrides a leaf held against the eyes was sometimes believed to give second sight. [45]

In Sussex and Devonshire superstition, yarrow was used for finding one's real sweetheart. One would pluck yarrow growing on a young man's grave while reciting:

Yarrow, sweet yarrow, the first that I have found,
in the name of Jesus Christ, I pluck it from the ground;
As Joseph loved sweet Mary, and took her for his dear,
so in a dream this night, I hope, my true love will appear.

and go to sleep with the yarrow under the pillow. [41]

In a similar tradition in Wicklow, girls would pick yarrow on Hallow Eve and recite:

Thou pretty herb of Venus' tree,
Thy true name is yarrow;
Now who my bosom friend may be,
Pray tell thou me to-morrow.

then retire for the night without speaking and go to sleep with an ounce of yarrow sewn in flannel under the pillow. [41]

In Suffolk a leaf was placed in the nose so it would bleed, while reciting

In Dublin on May Day or the night before, women would place a stocking full of yarrow under their pillow and recite:

Good morrow, good yarrow, good morrow to thee,
I hope by the yarrow my lover to see;
And that he may be married to me.
The colour of his hair and the clothes he does wear,
And if he be for me may his face be turned to me,
And if he be not, dark and surely may he be,
And his back be turned toward me. [41]

In the witchcraft trial of Elspeth Reoch in March 1616, she was alleged to have plucked "melefour," thought to be another name for yarrow, and said "In nomine Patris, Fiili, et Spiritus Sancti" to become able to cure distemper and impart the faculty of prediction. [41]

Yarrow was thought to bring luck due to being "the first herb our Saviour put in His had when a child." [41] 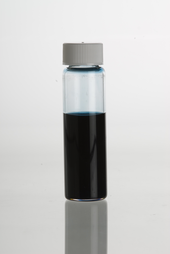 Some pick-up sticks are made of yarrow.

Yarrow can be used for dying wool as it contains apigenin and luteolin. Depending on the mordant the color may be green to yellow. [46]

Yarrow is considered an especially useful companion plant, attracting beneficial insects and repelling some pests. It attracts predatory wasps, which drink the nectar and then use insect pests as food for their larvae. Similarly, it attracts ladybirds and hoverflies. [21]

A. millefolium can be planted to combat soil erosion due to the plant's resistance to drought. Before the arrival of monocultures of ryegrass, both grass leys and permanent pasture always contained A. millefolium at a rate of about 0.3 kg/ha. At least one of the reasons for its inclusion in grass mixtures was its deep roots, with leaves rich in minerals. Thus its inclusion helped to prevent mineral deficiencies in the ruminants to which it was fed.

It was introduced into New Zealand as a drought-tolerant pasture. It is very prevalent. [3]

In the Middle Ages, yarrow was part of a herbal mixture known as gruit used in the flavoring of beer prior to the use of hops. [47] The flowers and leaves are used in making some liquors and bitters. [2]

When consumed by cows, an unfavorable flavor is given to their milk. [48]

In vitro studies found various Achillea species, including A. millefolium, to have antioxidant activity. Studies in mice also found anti-inflammatory activity. There are some initial positive results for other uses. [49] [50]

Yarrow may also be useful as an insect repellent. [49]

See also: List of plants in The English Physitian

A. millefolium has seen historical use as in traditional medicine, often because of its astringent effects. [2] The herb is purported to be a diaphoretic, astringent, [39] tonic, [39] stimulant and mild aromatic.

Yarrow, known as Biranjasipha in sanskrit, is widely used in Ayurvedic medicines in India. It is known for its diaphoretic and carminative properties, and is added to multi herbal preparations used for gastrointestinal disorders. [51]

Yarrow and its North American varieties were traditionally used by many Native American nations across the continent. [52] The Navajo historically considered it a "life medicine" and chewed the plant for toothaches and used its infusions for earaches. The Miwok in California use the plant as an analgesic and head cold remedy. [52]

Common yarrow is used by Plains indigenous peoples such as the Pawnee, who use the stalk for pain relief. The Cherokee drink a tea of common yarrow to reduce fever and aid in restful sleep. [52]

The occidentalis variety is used medicinally by the Zuni people. The blossoms and root are chewed and the juice applied before fire-walking or fire-eating. A poultice of the pulverized plant is mixed with water and applied to burns. [53]

Some Ojibwe people sprinkle a decoction of yarrow leaves on hot stones and inhale it to treat headaches, [54] or apply decoctions of the root onto skin for its stimulating effect. [55] Some smoke its florets for fever-breaking purposes, either by pipe or off hot stones or coals. [56]

It has also been used to treat hemorrhaging, as a poultice to ease rashes, and as a tea made from the leaves to cure stomach ailments. [57]

Opopanax, also known as opobalsam, refers to a number of gum resins, including the one from A. millefolium. It is traditionally considered to have medicinal properties.

In rare cases, yarrow can cause severe allergic skin rashes; prolonged use can increase the skin's photosensitivity. [58] This can be triggered initially when wet skin comes into contact with cut grass and yarrow together.

According to the ASPCA, yarrow is toxic to dogs, cats, and horses, causing increased urination, vomiting, diarrhea and dermatitis. [59]

In a standard rodent model for reproductive toxicity, aqueous extracts of yarrow produced a significant increase in the percentage of abnormal sperm. [60]

Chamazulene and δ-Cadinol are chemical compounds found in A. millefolium. The chromophore of azulene was discovered in yarrow and wormwood and named in 1863 by Septimus Piesse.