Abies concolor, the white fir, is a coniferous tree in the pine family Pinaceae. This tree is native to the mountains of western North America from the southern Cascade range in Oregon, south throughout California and into the Sierra de San Pedro Mártir in northern Baja California; east through parts of southern Idaho, to Wyoming; and south throughout the Colorado Plateau and southern Rocky Mountains in Utah and Colorado, and into the isolated mountain ranges of southern Arizona, New Mexico and northern Mexico. White fir live over 300 years and naturally occur at an elevation between 900–3,400 m (2,950–11,200 ft). [4]

It is popular as an ornamental landscaping tree and as a Christmas tree.

The specific epithet concolor means "all one color". [5]

The leaves are needle-like, flattened, 2.5–6 cm (1–2 3⁄8 in) long and 2 mm (3⁄32 in) wide by 0.5–1 mm (1⁄64–3⁄64 in) thick, green to glaucous blue-green above, and with two glaucous blue-white bands of stomatal bloom below, and slightly notched to bluntly pointed at the tip. The leaf arrangement is spiral on the shoot, but with each leaf variably twisted at the base so they all lie in either two more-or-less flat ranks on either side of the shoot, or upswept across the top of the shoot but not below the shoot. 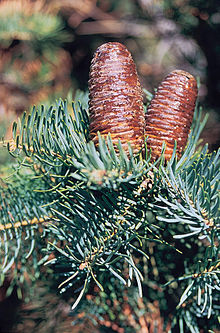 Foliage and cones of subsp. concolor

As treated here, there are two subspecies;[ citation needed] these are also variously treated at either the lower rank of variety by some authors, or as distinct species by others:

White fir is very closely related to grand fir (Abies grandis), with subspecies lowiana being particularly similar to the interior variety of grand fir A. grandis var. idahoensis, intergrading with it where they meet in the Cascades of central Oregon. To the south in Mexico, it is replaced by further close relatives, Durango fir (A. durangensis) and Mexican fir (A. mexicana).

White fir is a shade tolerant, climax species, which means the forest has reached complex maturity in forest succession in western coniferous forests of the United States. White fir and yellow pine ( ponderosa pine/ Jeffrey pine) have co-existed for millennia in old growth forests throughout their range. In the presence of logging of large diameter trees and exclusion of cleansing wildfires, young trees have become abundant over the past two centuries. [13] White fir had been regarded as a pest in the past by those in the lumber industry, but this opinion has changed. White fir is now one of the most important of all commercial softwoods according to the Western Wood Products Association. [14]

The white fir trait of retaining lower limbs creates an escape route for medium to small forest birds ( spotted owl) from larger flying predators and provides a drip zone around the roots for collecting moisture. The retained limbs can become a fire ladder that allow flames to climb up to the canopy. Limbing-up white fir, instead of removing medium to large diameter trees, in areas where the public is more likely to start fires can help keep other trees and specifically giant sequoia from experiencing canopy fire. Recent concern for sequoia groves has caused agencies to call for removal of white fir in the Sierra Nevada. While sequoia seedlings and young saplings are highly susceptible to mortality or serious injury by fire; mature sequoias are fire adapted with: fire resistant bark, elevated canopies, self-pruning lower branches, latent buds, and serotinous cones. The sequoia ecosystem is incomplete without the mixed pine/fir and oak that make up the mid and understory. [15] Giant Sequoia's cones release seeds when the heat of fire triggers them to open while the thick bark protects the inner cambium from fire damage. [16]

This tree is host to fir mistletoe (Phoradendron pauciflorum), a parasitic plant. It is attacked by many types of insects, such as the fir engraver (Scolytus ventralis). [20]

Deer browse the foliage of this species and porcupines chew the bark. Songbirds, grouse, and various mammals eat the seeds. [23] [24]

White fir is a preferred construction species because of its nail-holding ability, lightness in weight, and resistance to split, twist, and pitch. It is straight-grained, non-resinous, fine-textured, stiff, and strong. [25]

White fir is popular as a Christmas tree and for Christmas decoration owing to its soft needles, generally excellent needle retention and abundance. It is often marketed as concolor or white fir. [26]

White fir is widely planted as an ornamental tree in parks and larger gardens, particularly some cultivars of subsp. concolor selected for very bright glaucous blue foliage, such as cv. 'Violacea'. The dwarf cultivar 'Compacta', growing to a maximum height and spread of 2.5 m (8.2 ft), has gained the Royal Horticultural Society's Award of Garden Merit. [27] [28]