The Verdon Gorge ( French: Gorges du Verdon) is a river canyon located in the Provence-Alpes-Côte d'Azur region of Southeastern France. It is about 25 km (15.5 mi) long and up to 700 metres (0.4 mi) deep. It was formed by the Verdon River, which is named for its turquoise-green colour, one of the location's distinguishing characteristics. In between the towns of Castellane and Moustiers-Sainte-Marie, the river has cut a ravine to a depth of 700 meters through the limestone mass. At the end of the canyon, the Verdon flows into the artificial Lake of Sainte-Croix.

The gorge is very popular with tourists, who can drive around its rim, rent kayaks to travel on the river, or hike. The limestone walls, which are several hundreds of metres high, attract many rock climbers. It is considered an outstanding destination for multi-pitch climbing, with 1,500 routes available ranging from 20 metres (65 feet) to over 400 metres (1,300 feet).

During the Triassic period, the Provence subsided and was covered by the sea, leaving thick layers of various limestone deposits. Several million years later, with the arrival of the Jurassic period, the area was covered by a warm shallow sea, which allowed the growth of various Corals. The Cretaceous period saw what is now Basse Provence being raised and the sea reaching the current location of the Alps, which were themselves erected during the tertiary era. As a result of the large-scale geological activity, many of the Jurassic limestone deposits fractured, forming relief with valleys and other such features. The origins of the Verdon Gorge can be traced to this era.[ citation needed]

The dawn of the Quaternary period had large-scale glaciation, transforming water pockets and lakes into rivers of ice, which remodeled the topography, scouring and striating the landscape.[ citation needed] At the end of this activity, erosion by rivers continued, forming the Gorge as it is today.[ citation needed] The Verdon's riverbed was scoured for a second time of the accumulated coral and limestone sediments, by a water delivery rate nearing 2000 to 3000 cubic metres per second.[ citation needed]

The gorge was described in printed form from 1782 and 1804.[ citation needed] By the second half of the 19th century, it was featured in French tourist guides.[ citation needed] According to Graham Robb's book The Discovery of France, the gorge did not become known outside France until 1906.

On 10 July 2006, the Council of State annulled the declaration of public use of a project by EDF relating to a proposed high-voltage line which would have had to pass through the Verdon Gorge.[ citation needed] This decision ended 23 years of struggle by public groups and associations of environmental defence to preserve a site of exceptional natural interest, of which a part contains protected animal and plant species. [1]

A view of the Verdon Gorge form the Falaise de l'Escalès

The source of the Verdon is close to the col d'Allos hill in the Trois Eveches mountain range, whence it continues, flowing into the Durance river near Vinon-sur-Verdon after traveling 175 kilometres. Between Castellane and the Galetas bridge, the river passes through the lake of Sainte-Croix, created by the construction of a dam of the same name. Before the dam was constructed, the village of Les Salles-sur-Verdon occupied the river plain. To create the reservoir, the village was destroyed in 1973.[ citation needed] Les Salles-sur-Verdon was reconstructed as a more modern settlement higher up the valley. Today, it is the youngest village in France.[ citation needed]

For some distance the Verdon Gorge forms the border between the départements of Var to the south and Alpes-de-Haute-Provence to the north in the Provence-Alpes-Côte d'Azur région.

This region between Castellane and the Lac de Sainte-Croix is called the Gorges du Verdon, or Verdon Gorge. It is split into three distinct parts:

The Verdon Gorge is narrow and deep, with depths of 250 to 700 metres and widths of 6 to 100 metres at the level of the Verdon river. It is 200 to 1500 metres wide from one side of the Gorge to the other at the summits. The Gorge has been compared to the Grand Canyon in the United States. [2]

View of the entrance to the Verdon Gorge with lake of Sainte-Croix in the foreground.

Between 1929 and 1975, five dams were erected on the course of the Verdon, between Castellane and Gréoux-les-Bains. These dams hold back water in the following reservoirs: 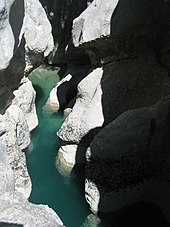 The Styx du Verdon, associated with the river Styx of Greek mythology, is an area of ub-canyon within the gorge.

The Imbut, also known as Embut or Embucq, is an area where the Verdon disappears underground, beneath enormous rock structures, before re-emerging above ground. 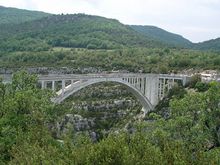 The Verdon Gorge attracts numerous tourists, especially during the summer period. The river's turquoise colour is associated with glacial sources and the minerals of rock flour suspended in the water.[ citation needed]

The most common hikes in the gorge include:

Other expeditions to the Verdon included Martel's team the following year; followed by Robert de Joly, who in 1928 was the first to completely cross the Verdon Gorge.[ citation needed]