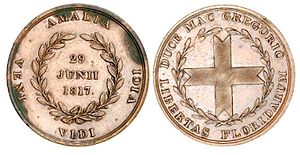 Currency issued in 1817 in the "Republic of Florida"

Well, the matter is a bit confusing, since the creator of the republic was Gregor MacGregor, that although he was under the command of Simón Bolívar, those who financed the project were Americans, so when the republic was proclaimed, the republic's goverment "voluntarily" joined to Venezuela but the investors wanted join the republic to USA, so the United States seeing that the situation was chaotic, occupied the territory for itself, breaking the relations with Venezuela, because Venezuela considered and continues to consider Florida as part of its territory. 2A02:2E02:27CF:6500:880A:22D2:83C7:8E9E ( talk) 11:27, 20 February 2020 (UTC)

Oh, God, we've seen this absurd claim before; it's usually introduced by Venezuelans, naturally, although geolocation indicates that this IP is in Valladolid, Spain. Whether or not Bolívar himself actually commissioned the filibuster MacGregor on his ill-conceived, failed quest to conquer the Floridas, Bolívar had no authority to "order" their creation as an independent republic, since they were owned by the sovereign nation of Spain. I routinely reverted a sneaky editor from Caracas who kept trying to slip this nonsense into the WP article on Gregor MacGregor for years, and a couple of other articles, but he never produced a source in English or Spanish. Carlstak ( talk) 00:54, 21 February 2020 (UTC)

Does the musical adaptation of "I am Florida" have the same legal status as "Old Folks at Home" as a state song or am I missing something? I know the law says that it supposed to supplement "Old Folks at home". Help clearing up this confusion would be much appreciated. Flags200 ( talk) 12:33, 18 May 2020 (UTC)

The 'Notes' tab should be removed

The Economy of Florida is a topic of particular current interest. Here are some potential sources of information: