From Wikipedia, the free encyclopedia
City in Oregon, United States

Roseburg is a city in the U.S. state of Oregon. [5] It is in the Umpqua River Valley in southern Oregon and is the county seat and most populous city of Douglas County. Founded in 1851, the population was 21,181 at the 2010 census, making it the principal city of the Roseburg, Oregon Micropolitan Statistical Area. The community developed along both sides of the South Umpqua River and is traversed by Interstate 5. Traditionally a lumber industry town, Roseburg is the original home of Roseburg Forest Products, which is now based in nearby Springfield.

Waterfalls near Roseburg include Susan Creek Falls and Fall Creek Falls. [6] Roseburg's primary industries include timber and tourism, and the region is home to many vineyards and more than 30 wineries. [7]

Oregon Department of Fish & Wildlife lists more than 50 areas for fishing for salmon, steelhead, bass, bluegill and trout in the Roseburg area. [8]

Modern-day Roseburg is located on the former lands of numerous Indian tribes, including the Cow Creek Band of the Umpqua Tribe, whose Cow Creek Umpqua Indian Foundation is located in Roseburg. [9] Roseburg was the site of the 1855 Hungry Hill battle, part of the Rogue River War of 1855–56, fought between several southern Oregon Indian groups and the US Army. [10] 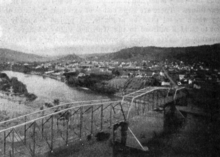 Rose constructed the first building in what would become Roseburg, a rough structure made of poles and clapboards with a front room about 16 or 18 feet square; it was used as a grocery store, backed by a dining room and kitchen. [12] Originally, guests could use the floor of the front room to spread their beds or were able to sleep out of doors under nearby oak trees. [12] His first structure served as a roadside inn and tavern for many years. Rose built a proper hotel in 1853. He died in 1899. [11] 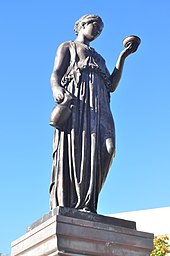 Roseburg was first known as Deer Creek because it was at the confluence of Deer Creek and the South Umpqua River. [11] In 1854, voters chose Roseburg as the county seat over rival town Winchester. Rose donated 3 acres (1.2 ha) of land and $1,000 for the building of the county courthouse, and the important buildings of Winchester were moved to Roseburg before 1860. [11]

Timber Capital of the Nation

The fortunes of Roseburg grew with the lumber industry. In 1937, Roseburg Lumber opened. Founded by Kenneth Ford, the company became the major employer in the community. Other major employers, including Weyerhaeuser, Champion and Sun Studs also developed and grew during this time. By the 1970s Roseburg branded itself as the Timber Capital of the Nation.

"Ride this train to Roseburg, Oregon. Now there's a town for you! You talk about rough... You know a lot of places in the country claim Paul Bunyon lived there. But you should have seen Roseburg when me and my daddy come there. Every one of them loggers looked like Paul Bunyon to me.” [14]

On August 7, 1959, at approximately 1:00 a.m., the Gerretsen Building Supply Company caught fire. Firefighters soon arrived at the building, near Oak and Pine Streets, to extinguish the fire. Earlier in the evening, a truck driver for the Pacific Powder Company, George Rutherford, had parked his explosives truck in front of the building, which was not noticed. The truck exploded at around 1:14 a.m., destroying buildings in an eight-block radius and severely damaging 30 more blocks. [15]

The truck was loaded with two tons of dynamite and four-and-a-half tons of the blasting agent nitro carbo nitrate. Rutherford had parked the truck after arranging his delivery for the following morning, despite warnings given to the Pacific Powder Company two days earlier not to leave such trucks unattended or park them in "congested areas". A police officer named Donald De Sues and the Chief of Police were on site and managed to evacuate citizens from the area of the truck before the explosion. Donald De Sues and the Chief of Police were recognized as heroes that day and were both killed in the blast. [16] A total of fourteen people died in the blast and fire, and 125 were injured. Damage was estimated at 10 to 12 million dollars; the powder company was eventually made to pay $1.2 million in civil damages, but was acquitted of criminal wrongdoing. [15]

Roseburg's downtown was rebuilt, primarily by businesses using money collected from insurance claims. The city built a new bridge over the South Umpqua River on parcels affected by the disaster. [15] Since the incident, it is commonly referred to as the Roseburg Blast or simply "The Blast". In 2005, SOPTV produced a documentary examining the Blast and the experiences of those who were involved or witnessed it, entitled The Roseburg Blast: A Catastrophe and Its Heroes. [17]

On October 1, 2015, students at Umpqua Community College near Roseburg were attacked by a 26-year-old gunman that had recently moved to the area from Southern California, who killed nine people (eight students and an assistant professor) and injured nine others. The gunman, a student at the school, committed suicide following a gun battle with police. This was the second school shooting in the Roseburg area, the other being a 2006 shooting at Roseburg High School. On October 9, President Barack Obama privately visited families of victims of the shooting. Hundreds of local residents protested the visit due to Obama's support of gun control legislation. [18] [19] In 1968, Bobby Kennedy had given a speech in Roseburg advocating for gun control for the mentally ill and for those with a "long criminal record" of murder. [20]

Roseburg's elevation is approximately 500 feet (150 m). Its highest point is Mount Nebo, a 1,200-foot (370 m) hill to the west of Interstate 5. Through the 1980s, it was known for its band of 10-20 feral angora goats. Residents said they could predict the weather by watching where the goats were on the mountain; if they were high, the weather would be good. If rain was pending, the goats moved to lower levels. Because the goats wandered across the freeway for grazing, they were a risk to traffic. In the 1980s, they were rounded up and placed for adoption. [22]

Primary and secondary public education in Roseburg are provided by the Roseburg School District. Umpqua Community College is the city's two-year college.

Mercy Medical Center, a 178-bed hospital. Mercy is the 2nd largest employer in the town of Roseburg.

In 2018, the City of Roseburg opened its own library. Previously, the city's library had been part of the Douglas County Library System but was closed when county libraries lost public funding.

Oregon Route 99 runs through downtown Roseburg as the main north–south arterial. Interstate 5 runs along the west side of the city, across the South Umpqua River from downtown.

There are two public airports, Marion E. Carl Memorial Field at the north end of town and George Felt Airport to the west.