Rex Elvie Allen (December 31, 1920 – December 17, 1999), known as "the Arizona Cowboy", was an American film and television actor, singer and songwriter; he was also the narrator of many Disney nature and Western productions. For his contributions to the film industry, Allen received a motion pictures star on the Hollywood Walk of Fame in 1975, located at 6821 Hollywood Boulevard. [1] [2]

Allen was born to Horace E. Allen and Luella Faye Clark on a ranch in Mud Springs Canyon, forty miles from Willcox in Cochise County in southeastern Arizona. As a boy he played guitar and sang at local functions with his fiddle-playing father until high-school graduation when he toured the Southwest as a rodeo rider. He got his start in show business on the East Coast. 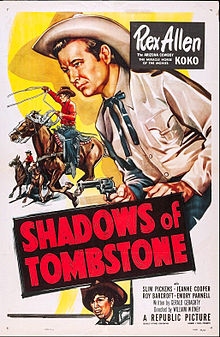 Poster for Shadows of Tombstone, 1953

Allen began his singing career on radio station KOY in Phoenix, Arizona, after which he became better known as a performer on the National Barn Dance on WLS in Chicago. [3]

When singing cowboys such as Roy Rogers and Gene Autry were very much in vogue in American film, in 1949 Republic Pictures in Hollywood gave him a screen test and put him under contract. Beginning in 1950, Allen starred as himself in 19 of Hollywood's Western movies. One of the top-ten box office draws of the day, whose character was soon depicted in comic books, on screen Allen personified the clean cut, God-fearing American hero of the wild West who wore a white Stetson hat, loved his faithful horse Koko, and had a loyal buddy who shared his adventures. Allen's comic-relief sidekick in his first few pictures was Buddy Ebsen and then character actor Slim Pickens.

His five children included Rex Allen Jr., who became a singer like his father.

Allen wrote and recorded many songs, a number of which were featured in his own films. Late in coming to the industry, his film career was relatively short as the popularity of westerns faded by the mid 1950s. But he starred in a number of B-Westerns during the 1950s.

As other cowboy stars made the transition to television, Allen tried too, cast as Dr. Bill Baxter for the half-hour weekly syndicated series Frontier Doctor. [4] In 1961 he was one of five rotating hosts for NBC-TV's Five Star Jubilee.

Allen had a rich, pleasant voice, ideally suited for narration, and was able to find considerable work as a narrator in a variety of films, especially for Walt Disney Pictures wildlife films and television shows. The work earned him the nickname, "The Voice of the West." He narrated the original 1963 version of The Incredible Journey. He also was the voice of the father on Walt Disney's Carousel of Progress, first presented at the 1964 World's Fair and now at Walt Disney World. A 1993 renovation replaced Allen with Jean Shepherd as the voice of the father, but Allen was given a cameo as the grandfather in the final scene.

Allen provided the narration for the 1973 Hanna-Barbera animated film Charlotte's Web. He was also the voice behind Purina Dog Chow commercials for many years. After moving to Sonoita, Arizona in the early 1990s, he was a viable voice talent almost until his death, recording hundreds of national advertising voice tracks at his favorite Tucson studio, Porter Sound. In his later years he also performed frequently with actor Pedro Gonzalez-Gonzalez. He wrote and sang the theme song for the early 1980s sitcom Best of the West.

Rex Allen died on December 17, 1999, two weeks before his 79th birthday, in Tucson, Arizona, of a massive heart attack. He had collapsed in his driveway and was then run over by his caregiver. [5] Cremated, his ashes were scattered at Railroad Park in Willcox [6] where most of his memorabilia are on display. A few months before his death, Allen gave an extensive interview on his days at WLS-AM to announcer and producer Jeff Davis for the 75th Anniversary History of WLS radio program, broadcast after Allen died. That segment of the program was dedicated to his memory.

For his contribution to the motion picture industry, Allen was given a star on the Hollywood Walk of Fame at 6821 Hollywood Boulevard.

In 1983, he was inducted into the Western Performers Hall of Fame at the National Cowboy and Western Heritage Museum in Oklahoma City, Oklahoma.

In 1989, his life story was told in the book Rex Allen: My Life, Sunrise to Sunset – The Arizona Cowboy, written by Paula Simpson-Witt and Snuff Garrett.

The Rex Allen Arizona Cowboy Museum and Willcox Cowboy Hall of Fame in Willcox, Arizona features an Allen's collection of memorabilia, including photos, movie posters, cowboy outfits, records and musical instruments. Across the street from the museum is a bronze statue of Allen. [7]

Allen was a cousin of the Gunsmoke cast member Glenn Strange, who played bartender Sam Noonan. His son, Rex Allen, Jr., is a singer.