From Wikipedia, the free encyclopedia
Cantilever bridge crossing the East River between Manhattan and Queens, New York
This article is about the bridge in New York City. For the bridge in New Westminster, British Columbia, see Queensborough Bridge.

The Queensboro Bridge, also known as the 59th Street Bridge – because its Manhattan end is located between 59th and 60th Streets – and officially named the Ed Koch Queensboro Bridge, is a cantilever bridge over the East River in New York City. It connects the neighborhood of Long Island City in the borough of Queens with the Upper East Side in Manhattan, passing over Roosevelt Island. The bridge was completed in 1909.

The Queensboro Bridge is the northernmost of four toll-free vehicular bridges connecting Manhattan Island to Long Island, along with the Williamsburg, Manhattan, and Brooklyn bridges to the south. It is the first entry point into Manhattan in the course of the New York City Marathon and the last exit point out of Manhattan in the Five Boro Bike Tour.

Looking east from Manhattan toward Queens 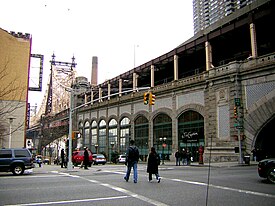 The Queensboro Bridge is a two-level double cantilever bridge, with separate cantilevered spans over channels on each side of Roosevelt Island joined by a fixed central truss. [3] In all it has five spans, including approaches between the cantilevered sections and each terminus. Their lengths are as follows: [4]

Until it was surpassed by the Quebec Bridge in 1917, the span between Manhattan and Roosevelt Island was the longest cantilever in North America. [5]

The upper level of the bridge has four lanes of automobile traffic, consisting of two roadways with two lanes in each directions. It provides a view of the bridge's cantilever truss structure and the New York skyline. Although the two upper level roadways both end at Thomson Avenue on the Queens side, they diverge in opposite directions on the Manhattan side. The lanes used by westbound traffic, located on the northern side of the bridge, lead north to 62nd and 63rd Streets. On the other hand, the lanes normally used by eastbound traffic are located on the southern side of the bridge lead south to 57th and 58th Streets. The roadway to 57th and 58th Streets is used as a westbound high-occupancy vehicle lane during rush hours. [6]

The Manhattan approach to the bridge is supported on a series of Guastavino tile vaults which formed the elegant ceiling of the former Food Emporium Bridge Market and the restaurant Guastavino's, located under the bridge. Originally, this open air promenade was known as Bridgemarket and was part of Hornbostel's attempt to make the bridge more hospitable in the city. [8]

Serious proposals for a bridge linking Manhattan to Long Island City were first made as early as 1838, and attempts to finance such a bridge were made by a private company beginning in 1867. Its efforts never came to fruition and the company went bankrupt in the 1890s. [9] Successful plans finally came about in 1903 – after the creation in 1898 of Greater New York City through the amalgamation of Manhattan (New York City), Brooklyn, Queens, the Bronx and Staten Island [10] – under the new city's Department of Bridges, led by Gustav Lindenthal, who was appointed to the new position of Commissioner of Bridges in 1902, in collaboration with Leffert L. Buck and Henry Hornbostel, designers of the Williamsburg Bridge.

Construction soon began, but it would take until 1909 for the bridge to be completed due to delays from the collapse of an incomplete span during a windstorm, and from labor unrest, which included an attempt to dynamite one span. The bridge opened for public use on March 30, 1909, [11] having cost about $18 million and 50 lives. There was a ten-cent toll to drive over the bridge. [12] The bridge's ceremonial grand opening was held on June 12, 1909. [13] At the time, it was the fourth longest bridge in the world. [11] The grand opening included a fireworks display. [13] The bridge was then known as the Blackwell's Island Bridge, from an earlier name for Roosevelt Island. [14]

Constructing the upper level in 1907 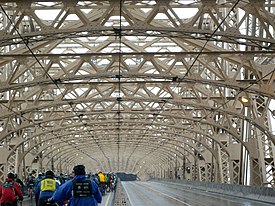 During the Five Boro Bike Tour in 2008

The bridge's upper level originally contained two pedestrian walkways and two elevated railway tracks (which connected a spur of the IRT Second Avenue Elevated Line in Manhattan to the Queensboro Plaza station in Queens). [11] Three lanes of roadway were installed on the south side of the upper level in 1931, replacing the former upper-level walkway. [15] All service on the Second Avenue Elevated was discontinued in 1942. [16] From 1955 to 1958, two additional lanes were built on the upper level. The upper-level ramps on the Queens end of the bridge were built during the same time. [17]

The lower deck originally hosted four motor traffic lanes, and what is now the "outer roadway" and pedestrian walk were two trolley lanes. [11] A trolley connected passengers from Queens and Manhattan to a stop in the middle of the bridge, where passengers could take an elevator or the stairs down to Roosevelt Island. [18] The trolley operated from the bridge's opening until April 7, 1957. [19] The trolley lanes and mid-bridge station, as well as the stairs, were removed in the 1950s following the trolley's discontinuation, [20] and for the next few decades the bridge carried 11 lanes of automobile traffic.

In 1930, an elevator was built on the bridge to transport cars and passengers to what was then called Welfare Island, now Roosevelt Island. [21] [22] Then, in 1955, the Welfare Island Bridge from Queens opened, allowing automobile and truck access to the island and the only non-aquatic means in and out of the island; the vehicular elevator to Queensboro Bridge then closed, [21] but wasn't demolished until 1970. [22] However, as late as August 1973, a separate passenger elevator ran during the work week from near the Queens end of the bridge to Welfare Island via the Welfare Island Elevator Storehouse, which was described at the time as "clean but gloomy". [23] [24]

There was also at one time what was known as the "upside-down" building on the north side of the bridge, because its main entrance was on the bridge. This provided access to the hospitals on the island. This building, which was located about where the current tram station is, has now been demolished. [20]

After years of decay and corrosion, an extensive renovation of the bridge began in 1987 and completed in 2012, having cost over $300 million.

For a brief period in 1997, the traffic directions of the upper-level roadways were reversed during rush hours so that the upper level used a left-hand traffic pattern. Manhattan-bound traffic used the southern roadway while Queens-bound traffic used the northern roadway. [25] After residents of the Upper East Side voiced concerns about severe rush-hour congestion, this traffic pattern was discontinued, and the south-side walkway on the lower level was converted to a Queens-bound vehicular lane during the evening rush hour. [26] The outer roadway was later opened to vehicles at all times, but after a series of fatal crashes in 2013, officials decided to close the ramp during the nighttime. [27]

In March 2009, the New York City Bridge Centennial Commission sponsored events marking the centennial of the bridge's opening. [28] The bridge was also designated as a National Historic Civil Engineering Landmark by the American Society of Civil Engineers during the year of its centennial anniversary. [5]

In December 2010, the city announced that the bridge would be renamed in honor of former Mayor Ed Koch from the Queensboro Bridge to the Ed Koch Queensboro Bridge. [29] The new name became official in March 2011. The renaming decision was unpopular among Queens residents and business leaders, and many local residents continue to refer to the bridge by its older name. [30] [31] [32] New York City Council member Peter Vallone, Jr. from Queens vowed to remove Koch's name from the bridge. Vallone said, "Never in a million years would they think to rename the Brooklyn or Manhattan bridges, but for some reason, it was OK to slap Queens around." [31]

In addition to the two elevated railway tracks, the bridge also had four streetcar tracks. The following Queens lines operated over the bridge:

One Manhattan line operated over the bridge, the Third Avenue Railway's 42nd Street Crosstown Line from 1910 to 1950. 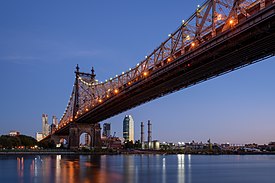 The Bridge, Blackwell's Island by George Bellows, 1909, Toledo Museum of Art
For popular culture references to the tramway that involve the bridge in the background, see Roosevelt Island Tramway § In popular culture.