The Myrtle Beach Pelicans are a Minor League Baseball team in Myrtle Beach, South Carolina, and the Class A-Advanced affiliate of the Chicago Cubs. [1] The Pelicans are members of the Carolina League and most recently won the league's championship in 2016. [2] Home games are played at TicketReturn.com Field, which opened in 1999 and seats up to 6,599 fans. [3] From their inaugural season through 2010, the Pelicans were affiliated with the Atlanta Braves, before spending four seasons as a Texas Rangers affiliate from 2011 to 2014. The team's affiliation with the Chicago Cubs began in 2015 and is currently in place through 2022. [4]

Previously, this franchise was known as the Durham Bulls, but relocated following the 1997 season as a result of the expansion of the Triple-A International League into Durham, North Carolina, where the new franchise assumed the "Bulls" name. It spent the 1998 season in Danville, Virginia, as the Danville 97s, awaiting a move to Myrtle Beach while their new stadium, Coastal Federal Field, was under construction. When then their home ballpark opened its gates on April 12, 1999, for the franchise's first game, 5,521 fans came to see the Pelicans play the Potomac Cannons. [3] In the first at bat, Pelicans pitcher Luis Rivera struck out Cannons hitter Esix Snead looking. [3] The first two hits at the stadium were home runs for each team, first by Potomac's Andy Bevins, and later that same game by Myrtle Beach's Ryan Lehr. [3]

Their ballpark has since been renamed TicketReturn.com Field at Pelicans Ballpark, which is a family-friendly stadium with a speed pitch, obstacle course, and moon bounce on the concourse. In 2004, Baseball America rated it the second-best Class-A level ballpark in the United States, and the best in the Carolina League in 2009. [3] For four consecutive seasons (2011–2014), Stadium Journey ranked the Pelicans as the top stadium experience in the Carolina League, [5] and one of the publication's "Top 50 Stadium Experiences" in all of sports, [3] while TripAdvisor named the team the third-best attraction in Myrtle Beach. 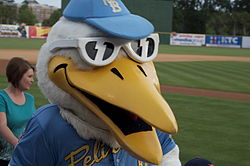 Splash, one of the team mascots

In their first season, the Pelicans advanced to the 1999 Carolina League Mills Cup Championship series. The best-of-five series against the Wilmington Blue Rocks was tied 2–2, with the deciding Game 5 set to be played in Myrtle Beach, when the series was cancelled because of Hurricane Floyd. The two teams were named co-champions for that season.

Myrtle Beach won both the first and second-half Southern Division titles in 2008 under Rocket Wheeler, who was named Carolina League Manager of the Year. The following season, Jason Heyward played over half the year in Myrtle Beach en route to being named Baseball America's 2009 Minor League Player of the Year.

On July 3, 2014, the Pelicans home game with the Winston-Salem Dash was broadcast on the CBS Sports Network, the first time the Pelicans were on live national television. [6] [7]

On September 16, 2014, the Myrtle Beach Pelicans reached an agreement on a player development contract (PDC) with the Chicago Cubs, beginning with the 2015 season. [1] The current PDC makes the Pelicans the Class A-Advanced affiliate of the Cubs through 2022. [4]

Several Pelicans have gone on to play in the major leagues. Some of these are: [12]

Myrtle Beach has honored three of its members by retiring their uniform numbers. [13]