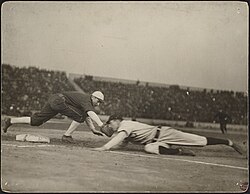 Pickoff attempt during one of the games. Frank Chance slides in safely past the tag of Jiggs Donahue.

The 1906 World Series featured a crosstown matchup between the Chicago Cubs, who had posted the highest regular-season win total (116) and winning percentage (.763) in the major leagues since the advent of the 154-game season; and the Chicago White Sox. The White Sox, known as the "Hitless Wonders" after finishing with the worst team batting average (.230) in the American League, beat the Cubs in six games for one of the greatest upsets in Series history. This was the first World Series played by two teams from the same metropolitan area. (The home teams alternated, starting with the NL team being home in game 1.)

The teams split the first four games; then the Hitless Wonders (a name coined by sportswriter Charles Dryden) exploded for 26 hits in the last two games. True to their nickname, the White Sox hit only .198 as a team in winning the series, but it beat the .196 average produced by the Cubs.

This is also the most recent World Series where both teams were making their first appearance in the Fall Classic, and since the Washington Nationals made it into the World Series in 2019 as the last National League team (leaving the Seattle Mariners as the only current MLB team without an appearance in the Fall Classic) there is currently no such makeup possible—at least until new franchises are accepted into MLB. 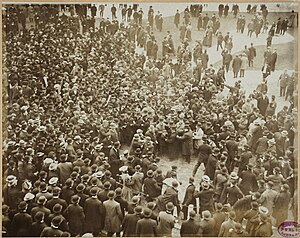 Tuesday, October 9, 1906, at West Side Grounds in Chicago, Illinois

Cub starter Mordecai "Three-Fingered" Brown was chosen for his dominance against White Sox starter Nick Altrock. Both were perfect through three innings. The Cubs put a runner on second in the bottom of the fourth inning, but couldn't score. In the top of the fifth, George Rohe tripled to lead off, then scored on an error at home when Patsy Dougherty reached on a fielder's choice. The Sox scored a second run in the top of the sixth. Altrock walked, and was sacrificed to second base by Ed Hahn. Fielder Jones then singled to center but Altrock was thrown out at the plate, Jones taking second on the throw home. He took third on Cub catcher Johnny Kling's passed ball, and Frank Isbell drove him home with a single. The Cubs struck back in their half of the sixth. Kling walked and Brown singled with nobody out. After Solly Hofman sacrificed the runners to second and third, Altrock's wild pitch scored Kling and sent Brown to third, giving him little margin for error with only one out, but he got Jimmy Sheckard to pop out and Frank Schulte to ground out to end the threat. He pitched beautifully for the rest of the game, allowing only one more Cub to reach second, retaining the 2–1 lead for a Game 1 Sox win.

Ed Reulbach was called on for the Cubs to face White Sox hurler Doc White. After matching 1–2–3 first innings, things started to fall apart for White. After cleanup-hitting first baseman Frank Chance led off the top of the second with a strikeout, third baseman Harry Steinfeldt singled to left field and shortstop Joe Tinker beat out a bunt. Cubs second baseman Johnny Evers then reached on a two-base error by White Sox second baseman Frank Isbell, scoring Steinfeldt for an unearned run and moving Tinker and Evers to second and third. Catcher Johnny Kling was then intentionally walked to load the bases and bring up the pitcher, still with only one out. Reulbach squeeze-bunted Tinker home for a second unearned run, moving Evers to third and Kling to second with two out. Solly Hofman followed with an infield single to shortstop Lee Tannehill, scoring Evers for a third unearned run, but when Kling tried to score from second, he was thrown out at home plate, ending the rally. The Cubs added a fourth unearned run in the third, ending Doc White's day on the mound. The Sox scored in the bottom of the fifth inning with an unearned run, thanks to a wild pitch and an error. The Cubs scored three more runs, all earned, in the sixth and eighth to win Game 2 7–1 and tie the Series at one game apiece. Reulbach pitched the first one-hitter in World Series history.

Thursday, October 11, 1906, at West Side Grounds in Chicago, Illinois

After allowing two first-inning hits, Sox starter "Big Ed" Walsh didn't give up another and struck out 12, giving the Sox a 2–1 edge in the series. After Fred Schulte's first inning two-out double, Walsh retired the next 25 of 27 Cub batters to face him. Third baseman George Rohe cracked a two-out, bases-loaded triple to left in the top of the sixth off Jack Pfiester for the only runs of the game.

"Three-Fingered" Mordecai Brown pitched 5⅔ innings of no-hit ball for the Cubs before settling for a two-hitter to even the series once more at two games apiece. Nick Altrock was the hard-luck loser, with the only run of the game coming on Johnny Evers' two-out single in the top of the seventh scoring Frank Chance. The Sox put the tying run on second base in the top of the ninth thanks to a two-out walk and a passed ball, but Frank Isbell grounded out to end the threat. The game took just 96 minutes.

Game 5 at West Side Park.

Saturday, October 13, 1906, at West Side Grounds in Chicago, Illinois

Game 5 was a wild affair with a total of 18 hits, ten walks, six errors, two hit batsmen, three wild pitches and a steal of home. The Cubs allowed a first inning run to the Sox, then scored three of their own to take an early lead. The Sox tied the game in the third on George Davis' theft of home on the front end of a double steal and then took the lead for good with a four-run rally in the fourth and held on for the victory to take a 3–2 lead in the series. A 12-hit attack led by Frank Isbell's four doubles were enough to overcome six errors committed by the porous Sox defense. "Big" Ed Walsh earned his second win of the series, although he needed three innings of relief help from Doc White.

South Side Park during Game 6.

Mordecai Brown, pitching on only one day of rest, didn't make it out of the second inning as the Hitless Wonders White Sox stunned the 116–36 Cubs in the Series finale. The Sox battered Brown for seven runs on eight hits while getting a solid pitching performance from Doc White. Although the Cubs scored a run and loaded the bases in the ninth, White got Frank Schulte to ground out for the final out of the series and the White Sox won the World Series over the powerful Cubs, who would compensate by winning the next two World Series from young Ty Cobb, Hugh Jennings and the Detroit Tigers even though they fell far short of 116 wins in 1907 or 1908, for the last Cub World Series wins in over a hundred years. 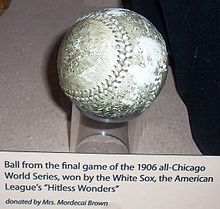 A ball from the series on display at the Baseball Hall of Fame.