Manhattan West is a 5.4-million-square-foot (500,000 m2) mixed-use development by Brookfield Properties, being built as part of the Hudson Yards Redevelopment. The project consists of two large office towers and two smaller residential towers, as well as a 1.5-acre (0.6-hectare) public park. [1] The towers are being built on a platform over Penn Station storage tracks along Ninth Avenue. The buildings are close to the Hudson Yards mega-development to the west across Tenth Avenue. Upon its completion, the taller west tower will extend 995 feet (303 m) up to its roof and will be one of the tallest buildings in New York City. [2]

In October 2015, the Qatar Investment Authority invested a 44% stake in the $4.5 billion mixed-use development project. [9] The deal included the formation of a joint venture between Brookfield Property Partners and QIA for the development of 7 million square feet (650,000 m2) of residential and office space in five buildings, including 62-story and 67-story skyscrapers, that Brookfield said would be worth $8.6 billion upon completion. [10]

Manhattan West is part of the Hudson Yards Redevelopment, a larger plan to redevelop the Hudson Yards area, which extends from the west of Pennsylvania Station to the Hudson River. [11] The QIA was referred to as an "early bird" for their investment in an area that has not yet come under widespread development. [10] This strategy assumes taking on more development risk in the hope of better returns. [11]

The development plans announced by Brookfield Property Partners and QIA include five buildings. The 67-story, 2.1 million square-foot building is scheduled for completion in 2019 and law firm Skadden, Arps, Slate, Meagher & Flom LLP and Affiliates have been confirmed as tenants. [12] [13] In July 2018, Wells Fargo provided a $530 million construction loan for the project. [14] The structure topped out in August 2018. [15] [16]

The structural system of the tower is composed of a central reinforced concrete core and a perimeter steel moment frame. Part of the tower overhangs the below ground train tracks leading into Penn Station. In order to avoid the tracks, the perimeter columns on the south, north, and east sides do not come down to ground level, but are transferred to the core above the building's lobby. [17]

4 Manhattan West will be a 21-story hotel with 164 guest rooms including 30 suites, a restaurant, a lounge, an open-air terrace bar, and meeting and event space operated by Pendry Hotels. [24] [12] [25] The building, designed by Skidmore Owings & Merrill, began construction in December 2018 and is set for a 2021 opening. [24] 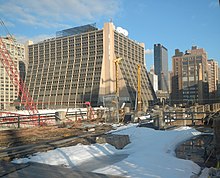 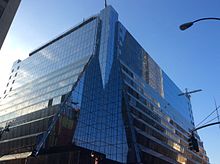 The existing building at 450 West 33rd Street, also known as Westyard Distribution Center, was designed by Davis Brody Bond and opened in 1969. [26] [27] The 1.8-million-square-foot (170,000 m2), 16-story building originally had a beige precast concrete facade with a sloped base, and although the facade was cleaned up in 2003, it was seen as out of place with the architecture of the surrounding neighborhood. [28] As of 2014, it contained the headquarters of the Associated Press. [29] In 2014, the brutalist concrete exterior was replaced with a glass facade and its interior and mechanical systems were also renovated. [30] When renovation of the building was completed, it was renamed 5 Manhattan West. [31]

The law firm Skadden, Arps, Slate, Meagher & Flom plans to move to One Manhattan West from 4 Times Square. Another law firm, Fried Frank, is considering moving to Manhattan West when the development is completed. [32] [33] In August 2017, Accenture signed a 250,000 square feet (23,000 m2) lease for the top eight floors of the tower. [34]

The National Hockey League is planned to move its headquarters to 1 Manhattan West. [35] Ernst & Young also announced in 2017 that it would relocate to 600,000 square feet (56,000 m2) at One Manhattan West, occupying the 6th through 22nd floors. [36] The company is moving from its previous location at 5 Times Square, leaving a million square feet of office space vacant. [37]

By late 2015, reports emerged that the Qatar Investment Authority (QIA) had plans to invest $35 billion in the U.S. over five years. [38] The QIA investments focus on diversifying the fund’s assets and concentrate on direct investments in real estate, with one of these investments being a 44% stake in Manhattan West. [10] Since the announcement, QIA has made a series of high-level investments in the U.S. including the purchase of a minority stake in the Empire State Building's owner. [39] In September 2015, QIA opened an office in New York City for closer management of the fund’s U.S. assets. [40]